After SpaceX launched the first-ever commercial crewed flight to space on Saturday, the two NASA astronauts inside gave a video tour of life inside the spaceship's cabin.

Astronauts Bob Behnken and Doug Hurley spent 19 hours inside the Crew Dragon capsule, which they named "Endeavour."As they waited for their opportunity to dock to the International Space Station, they took off their customised spacesuits, floated around, ate, tried to sleep, and gave the world a peek into the ship's cabin. "Today we accomplished the first flight off the Florida coast in quite some time, and Doug and I were really proud to have an opportunity to be a part of that," Behnken said in the livestream. "We're doing it in a brand-new spaceship."

The high-stakes spaceflight, called Demo-2, was the result of a nine-year partnership between SpaceX and NASA. If successful (the astronauts still have to return safely after their stay on the ISS), the mission will be just the first in a new era of launching astronauts from American soil - a feat the US hadn't accomplished since the Space Shuttle program ended in 2011.

Behnken and Hurley are the first people ever to fly in a commercial spacecraft; they showed off the perks in their livestream.

The astronauts started with a tour of the touch display screens from which they can monitor and control the spacecraft. The touch screens "allow us to accomplish most of the interfacing requirements that we have," Behnken said.

"We do have some buttons, but the primary interface is these displays," he said. "So nice new, modern cockpit that we've got compared to our namesake, the Space Shuttle Endeavour."

Behnken lowered himself below the astronauts' seats, to float in the small space between Hurley's feet and the wall of the capsule.

"It is a little bit of a tight quarters, but I'm going to try to demonstrate some of the capability that we have now that we're in zero gravity," Behnken said, pushing himself off a railing to flip upside down. "I was requested to do a backflip. I'm going to kind of do a side spin."

The tour also included an explanation of the dinosaur toy that accompanied the men into space. 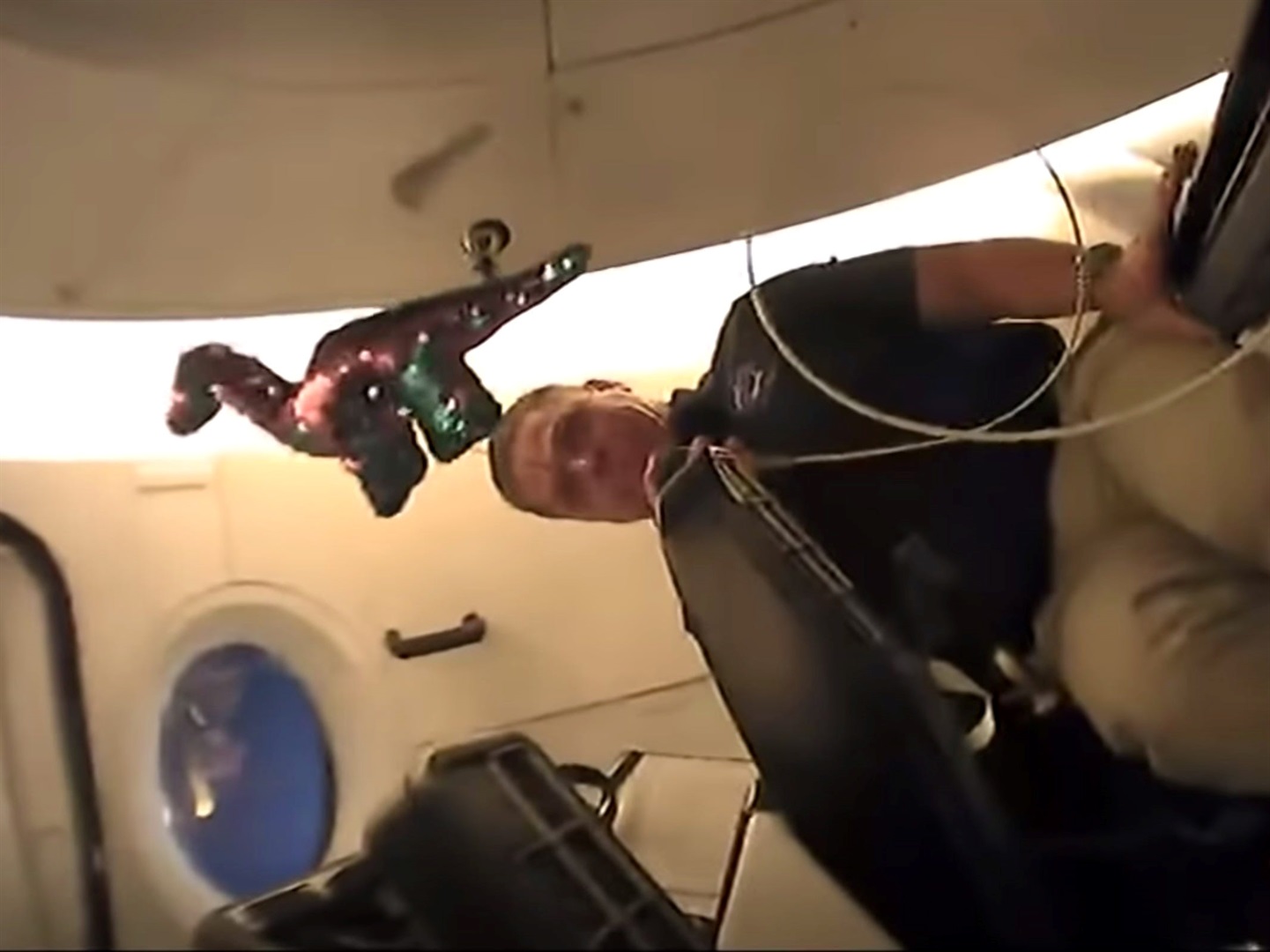 Bob Behnken introduces "Tremor," the sequined dinosaur plushie that traveled into space aboard the Crew Dragon, May 30, 2020.
NASA TV

"We both have two boys who are super interested in dinosaurs, and we collected up all the dinosaurs between the two houses, and Tremor the apatosaurus got the vote from the boys," Behnken explained.

Hurley and Behnken also attempted to give the camera a view out their window while the spacecraft was passing over the coast of Newfoundland. It was dark out, though, so the window just reflected the camera and the astronauts.

The video doesn't show the spaceship's toilets, which are located in the ceiling and shrouded in proprietary mystery.