Jeff Bezos, the richest person on Earth, is about to fly to the edge of space.

The billionaire founder of Amazon and Blue Origin is riding a New Shepard rocket up to the Kármán line - an imaginary boundary 100 kilometers above sea level, where many experts say space begins. There, he's expected to experience weightlessness and stunning views of Earth for about three minutes.

Bezos won't be flying solo. His brother, Mark, is set to join him, along with an 18-year-old Dutch high school graduate named Oliver Daemen and Wally Funk, an 82-year-old aviator who trained to go to space in the 1960s but was ultimately denied the opportunity because she was a woman.

New Shepard has flown successfully 15 times, but never with people on board. This will be its first passenger flight.

The rocket is scheduled to lift off from Blue Origin's launch site in Texas around 8 am (around 3pm South African time) on Tuesday. The company is broadcasting the spaceflight live, in the video embedded below, starting at 6:30 am CT (around 1.30pm South African time).

Blue Origin said there won't be any "public viewing areas" in the vicinity of the launch site. 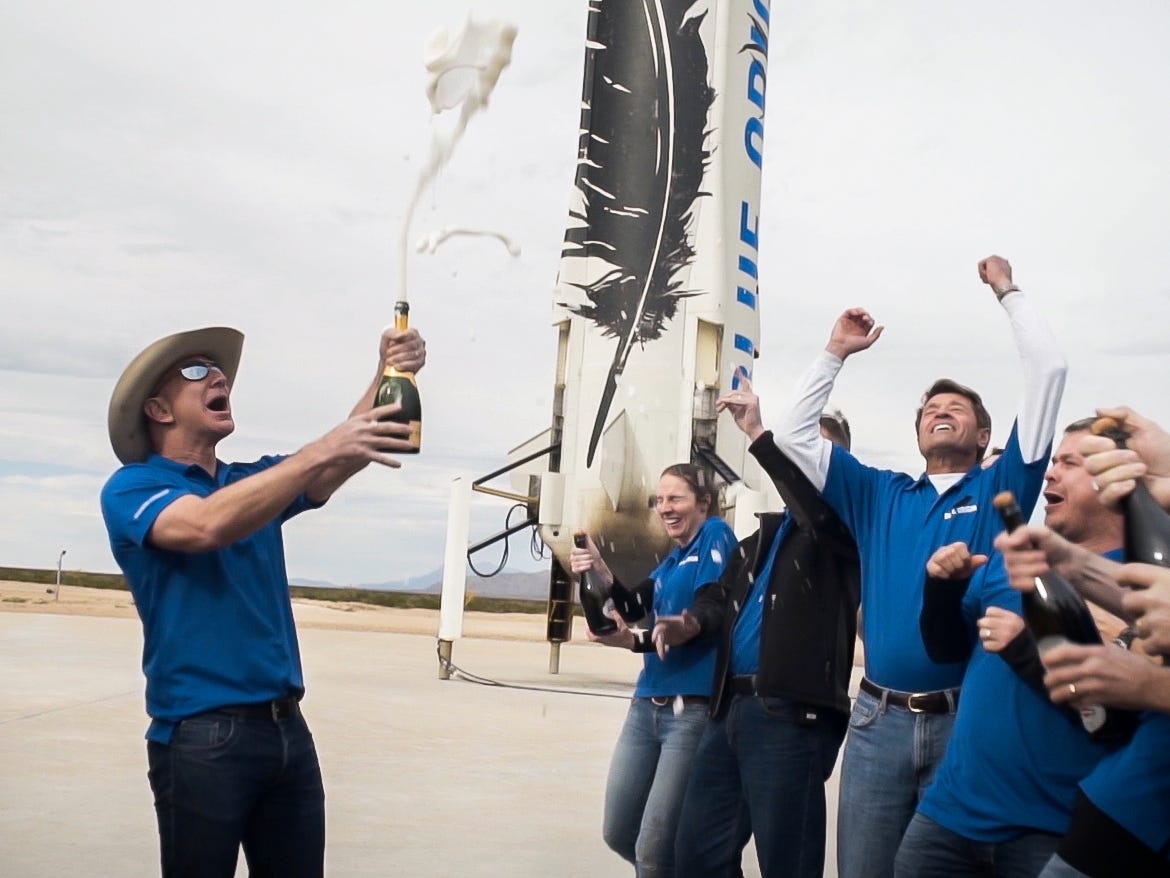 If all goes according to plan, the New Shepard rocket will fire its engines to heave itself off the launchpad. As Bezos and his guests scream through the atmosphere, the force of the climb and the pull of Earth's gravity - which should feel three times stronger than normal - are expected to pin them to their seats. After three minutes, the rocket booster should fall away from the capsule that holds the passengers. That capsule should continue arcing above the Earth, and Bezos and his companions should feel weightless.

They're expected to have three minutes to unbuckle, float around the cabin, and savour the views of the planet curving below. Then gravity should pull the spaceship into a high-speed plunge back to Earth. Three parachutes should balloon into the air to break the spaceship's fall, carrying the capsule to a gentle landing in the Texas desert. A recovery crew should be waiting.

The entire flight should last 11 minutes.

Richard Branson launched to space first, but he didn't pass the Kármán line Richard Branson, the billionaire founder of Virgin Galactic, flew aboard his company's space plane on Sunday. Though Branson insisted there's no competition between him and Bezos, Virgin Galactic changed its launch schedule in a way that sent Branson to the edge of space before Bezos.

Blue Origin, for its part, maintains that Branson didn't actually go to space because he only flew to about 88 kilometres above sea level.

"They're not flying above the Kármán line and it's a very different experience," Blue Origin CEO Bob Smith told The New York Times after Branson announced his flight.

"From the beginning, New Shepard was designed to fly above the Kármán line so none of our astronauts have an asterisk next to their name," Blue Origin tweeted. "For 96% of the world's population, space begins 100 km up at the internationally recognised Kármán line."

The 4% the tweet refers to is the US. Both NASA and the Federal Aviation Administration have awarded astronaut wings to pilots who flew past 100 km.