Warren Buffett's favourite market indicator has surged to a record high of 142%, signaling US and international stocks are heavily overpriced and could plummet in the months ahead.

The global version of the "Buffett indicator" takes the combined market capitalisation of the world's publicly traded stocks, and divides it by global GDP. A reading north of 100% indicates the global stock market is overvalued relative to the world economy.

Buffett trumpeted his namesake gauge in a Fortune magazine article in 2001. The billionaire boss of Berkshire Hathaway described it as "probably the best single measure of where valuations stand at any given moment."

Moreover, Buffett said it should have been a "very strong warning signal" when the yardstick skyrocketed during the dot-com bubble. He added that buying stocks at a reading of 70% or 80% would likely be lucrative, but investors would be "playing with fire" when the ratio approaches 200%.

The US stock market is firmly in "fire" territory with a current Buffett indicator reading of 208%. That figure is well above its 187% reading in the second quarter of 2020, when the pandemic was in full swing and GDP was about 15% lower.

However, the Buffett indicator isn't flawless. For example, it compares the current value of the stock market to past GDP. Governments around the world have also battled the pandemic by ramping up stimulus and shutting down large parts of their economies over the past 18 months, artificially inflating the yardstick's readings.

Here's the global version of the Buffett indicator: 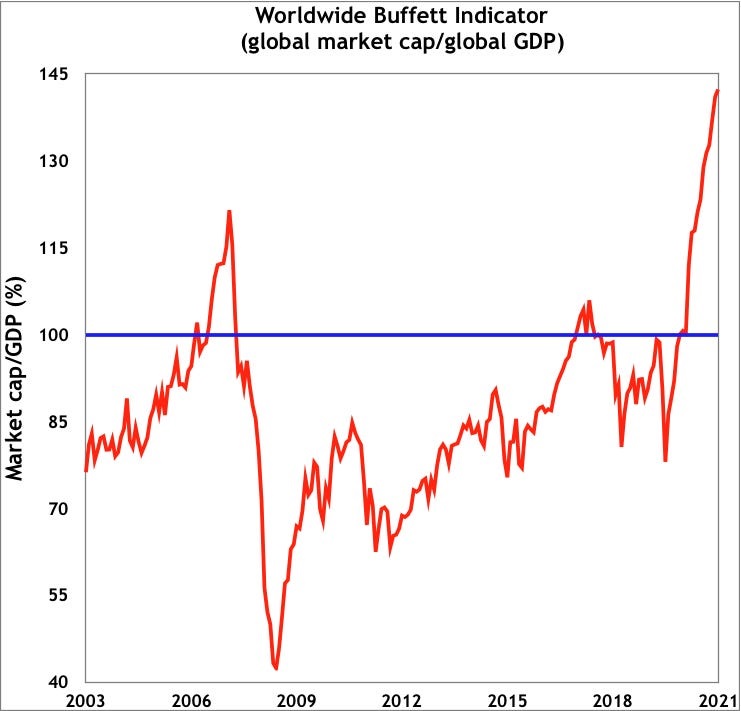 The global version of the Buffett indicator.
Bloomberg data