Passengers spent 2 hours flying in low-altitude because plane took off with too much fuel, reports Passengers had to spend two hours on a plane that was flying in low-altitude after the aircraft took off with too much fuel, according to a report by The Independent.

The Vueling flight departed from London Gatwick airport on Sunday evening and was due to head to Rome, Italy. Instead, it was diverted back to the UK airport, according to data from flight-tracking site FlightRadar24.

The plane flew around the south coast of England for one hour and 51 minutes, as per FlightRadar24. While the aircraft was circling, the altitude ranged from 5,900 feet to 8,000 feet, FlightRadar24's data showed.

After almost two hours, the plane landed back at Gatwick airport at around 23h30, as per FlightRadar24. 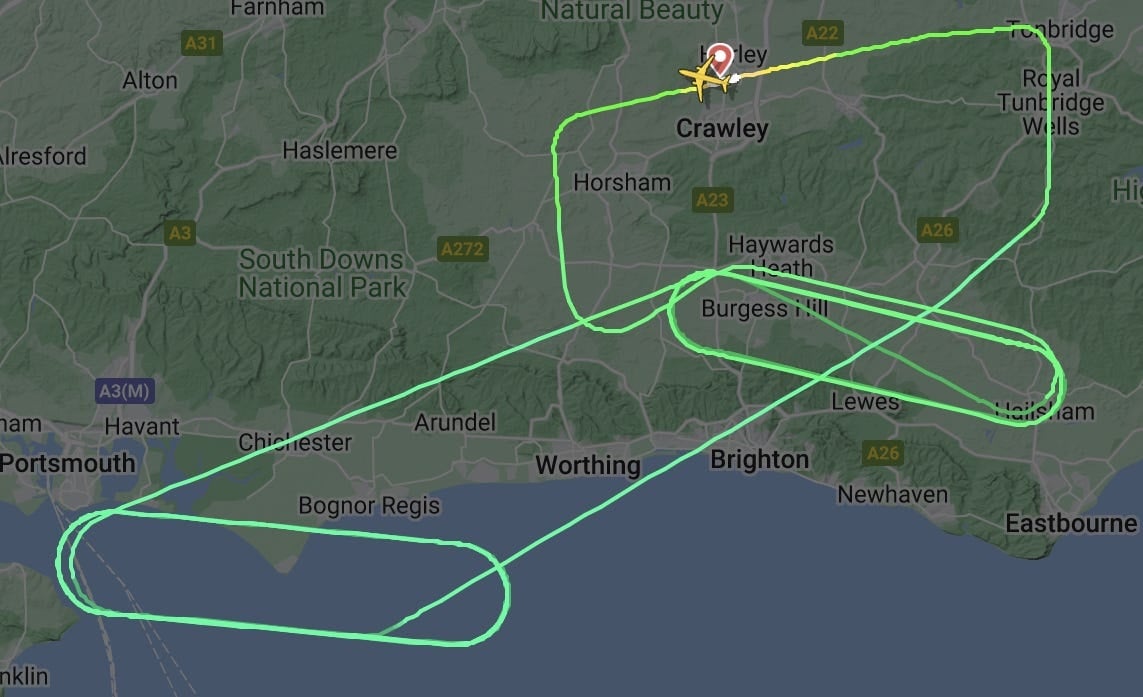 Screenshot of Vueling flight circling the UK coast after taking off from London Gatwick airport. FlightRadar24

Some passengers tweeted about the incident. "After 5 minutes from the take off the pilot found out there was too much fuel on the plane," Twitter user Francesco Ricci posted. "Now they are back in Gatwick and removing the unnecessary fuel."

Another person tweeted to Vueling, asking the Spanish airline whether passengers on the flight could access the toilet because of the plane flying at a low altitude.

A Twitter account called Flight Emergency, which has more than 82,700 followers, tweeted about the Vueling flight, saying the plane was "burning fuel just off the south coast for over an hour" and returned to the airport "due to having too much fuel onboard."

FlightRadar24 data showed the aircraft departed for another flight from London the next day and landed in Barcelona on time.

Plane fuel problems add to the list of issues that passengers are facing during a chaotic travel season. A Delta Air Lines plane had to make a U-turn over the Atlantic Ocean last week because of a fuel imbalance, the airline confirmed to Insider. One passenger onboard the flight told Insider he was terrified and thought he was going to die.

In addition, the crew of a Qantas Airways plane recently had to declare an emergency to get priority landing because the plane only had 40 minutes of fuel left.