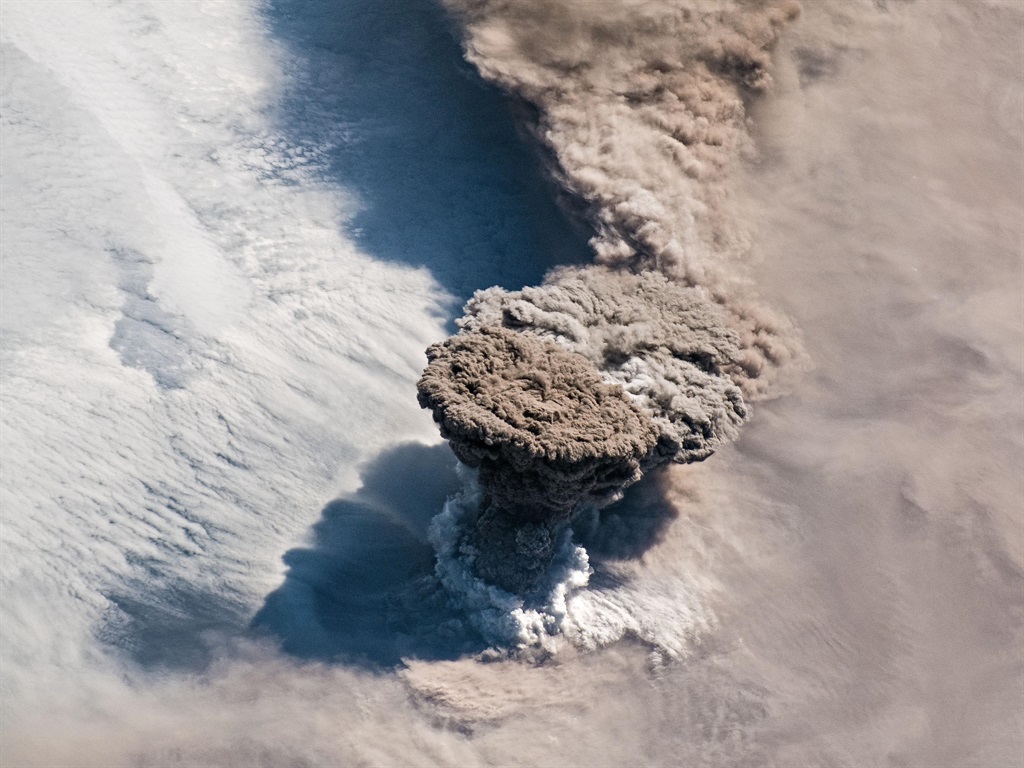 For the first time in nearly a century, the Raikoke volcano in the Pacific Ocean erupted last week.

Raikoke is in the Kuril Islands, which are off the coast of Russia just north of Hokkaido, Japan. On June 22, a mushroom-shaped ash plume rocketed skyward from the maw of the volcano's 2,300-foot-wide crater.

The blast was so intense that it broke through the clouds and could be seen from space. Satellites in orbit caught the eruption on camera, and astronauts on board the International Space Station could see it, too. The astronauts snapped the photograph above showing the rising ash.

The plume may have exceeded a height of 10 miles, the volcanologist Simon Carn said in a NASA press release.

NASA's Terra satellite captured a second image of the volcano (below), which shows brown volcanic debris emerging through clouds in the stratosphere. Keeping track of volcanic plumes that breach that stratosphere - which starts about 33,000 feet (6.2 miles) above the ground - is imperative because such eruptions can affect airplanes. The ash plumes consist of fragments of volcanic glass and rock that can wreak havoc on the machinery of nearby aircraft. Official volcanic-ash advisory centers in Tokyo and Anchorage, Alaska, have been tracking the plume since the eruption and have issued several notes to aviators, NASA reported.

Eruptions like Raikoke's can also affect local climates. When volcanoes fill the skies with sulfur dioxide and ash, the particles cause more sunlight to be reflected away from the planet, and the Earth cools. It's thought that the eruption of Mount Tambora in Indonesia nearly 200 years ago contributed to a severe summertime cold snap the following year, which triggered killer frosts in New England and Europe. The plume of the Raikoke volcanic eruption can be seen from space. The volcano is southeast of Russia, which can be seen in green.
Joshua Stevens/NASA Earth Observatory

Carn confirmed that the eruption injected "large sulfur dioxide amounts" into the stratosphere.

But just 24 hours after the eruption, NASA satellites showed that the dark Raikoke ash cloud had dissipated and no longer stood out against the stratosphere's white canvas.