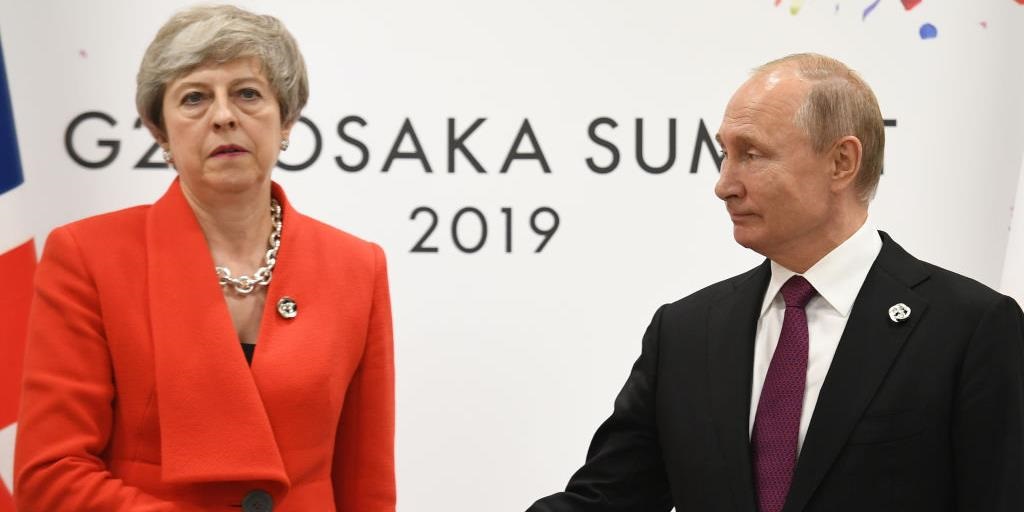 Theresa May and Vladimir Putin
Getty

Vladimir Putin has accused the United Kingdom of being less "democratic" than Russia, as Conservative Party members prepare to select the UK's next prime minister

Speaking to the Financial Times ahead of theG20 summit in Japan, the Russian President said that the Conservative party's leadership contests ignore "the people," pointing out the next UK leader will be decided by "the ruling party."

Asked about plans for finding his successor, Putin said: "Of course, it is different from what you have in Great Britain. We are a democratic country."

He added: "In your country, one leader has left, and the second leader, who is for all intents and purposes the top figure in the state, is not elected by a direct vote of the people, but by the ruling party."

Boris Johnson and Jeremy Hunt are battling it out to succeed May as Tory leader and prime minister.

Under Conservative leadership contest rules, the party's MPs decide which two candidates should reach the final round, before its small, socially-unrepresentative membership picks the winner - and in this case, the next prime minister. The party currently has just 160,000 members. Outgoing prime minister Theresa May is set to hold talks with Putin at the sidelines of the summit in Osaka on Friday.

It will be the first formal meeting of the pair since poisoned former Russian spy Sergei Skripal and his daughter Yulia were poisoned in Salisbury, southern England, resulting in the death of a British woman, Dawn Sturgess.

The UK believes two Russian intelligence officers were responsible for the March 2018 incident. Russia denies this.

May told the BBC that the suspects should be "brought to justice" ahead of her meeting with Putin.

In the same interview with the FT, Putin said that liberalism was dead and praised both the tough immigration policies of US President Donald Trump and the rise of right-wing populism in western Europe.

Putin said that liberal leaders "cannot simply dictate anything to anyone just like they have been attempting to do over the recent decades."

He called also liberalism "obsolete" and singled out German Chancellor Angela Merkel's decision to allow large numbers of Syrian refugees into Germany as a "mistake."