11 celebrity moments that went viral in 2018 Beyoncé Knowles performs onstage during 2018 Coachella Valley Music And Arts Festival.
Larry Busacca/Getty Images for Coachella
The internet has a way of grabbing onto major moments, and this year was no different. In 2018, the internet rallied around many standout moments.

From Beyoncé's unforgettable Coachella performance to Ariana Grande's "thank u, next" music video, these are the trending celebrity moments that really left their mark on 2018.

At the beginning of 2018, the public was wondering if Kylie Jenner was pregnant or if the speculation was another marketing scheme. On Superbowl Sunday, Kylie posted a video to her YouTube channel titled "To Our Daughter." The 11-minute video has over 77 million views to date and revealed to the world that she and Travis Scott had welcomed a baby girl.

After Kylie's announcement, the year really took off for the rest of the Kardashians. Khloe had announced her pregnancy in December 2017, but reports of infidelity by Khloe's partner, Tristan Thompson sparked outrage online, just days before her due date. Khloe and Tristan welcomed baby True in April.

Kim Kardashian and husband Kanye West also welcomed a child this year. Their daughter, Chicago, was born via surrogate in June.

The "Queer Eye" reboot captured the hearts of Netflix audiences. Since the premiere of the first season in February, Netflix has released a second season, and the show has won two Emmy awards. When it opened, "Black Panther" earned an estimated $201 million (R2.8 billion) and has since broken $1 billion (R14 billion), becoming the tenth-highest grossing movie of all time. It currently has a Rotten Tomatoes score of 97% and is nominated for two Golden Globes.

Not only did "Black Panther" score at the box office, but its position as a majority-black film has cemented its legacy as a catalyst for diversity.

Beyoncé made history performing at Coachella. 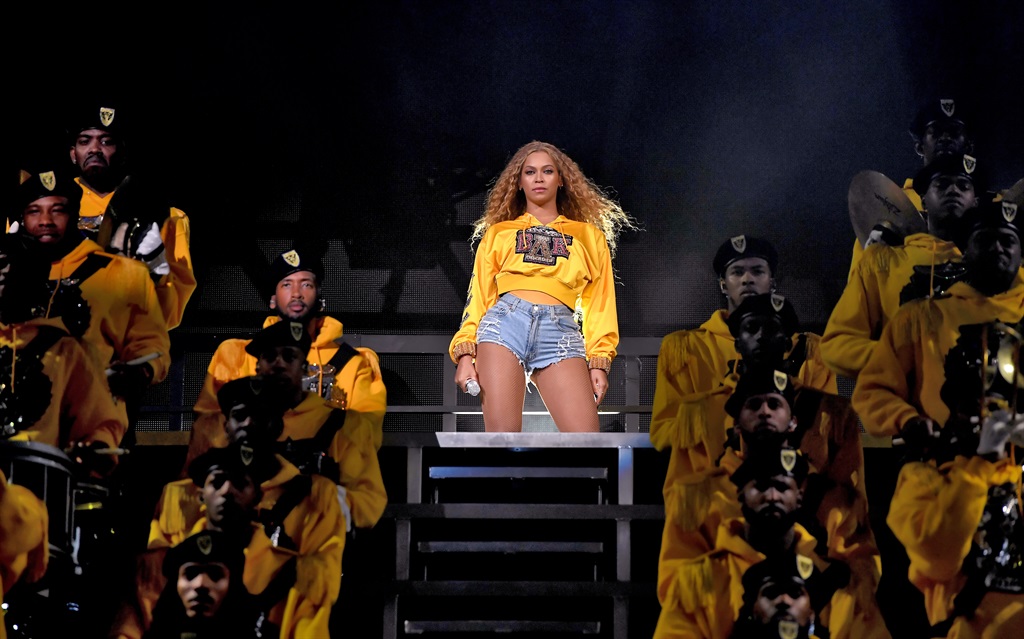 Beyoncé had yet another historic year, becoming the first black female artist to headline Coachella. Her set, performed on both weekends of the festival, consisted of 27 songs and featured impressive celebrity appearances.

The surprise reunion of Destiny's Child stirred up excitement in the days leading up to the festival and helped the performance draw a record number of 458,000 simultaneous global viewers on the official Coachella livestream.

The Balmain yellow hoodie that Beyoncé wore during the set sent searches up 58% for couture hoodies following the performance.

There were a lot of headline-making weddings this year. Back in May, Prince Harry married American actress Meghan Markle and the world watched it all unfold. The highly-anticipated wedding was watched by an estimated 29 million people around the world, topping the views of Kate Middleton and Prince William's wedding by 7 million viewers.

Markle walked down the aisle in Givenchy, but her daily outfits are what have helped coin the term "The Meghan Effect." According to Lyst, if Meghan wears a designer, they will see a 200% increase in search traffic almost immediately.

Justin Bieber and Nick Jonas are also both off the market, marrying Hailey Baldwin and Priyanka Chopra, respectively. The Bieber-Baldwin nuptials have been kept private, only alerting fans of their marriage when Baldwin changed her Instagram handle to @HaileyBieber.

The Jonas-Chopra celebration, however, was widely publicised. The celebrations began in Mumbai on November 26, and lead up to the traditional Indian ceremony on December 2. Chopra walked down the aisle in a Ralph Lauren gown, complete with a 75-foot-long veil. The two posted updates to their respective social media accounts during the celebrations, giving fans an inside look at the lavish nuptials.

"To All The Boys I've Loved Before" sparked many viral meme moments. "To All The Boys I've Loved Before" is based on the best-selling book by Jenny Han. Starring newcomers Lana Condor and Noah Centineo, the movie became a viral hit. Noah Centineo, who played Peter Kavinsky in the film, quickly became one of 2018's go-to heart-throbs.

Fans even began using the film's title to share stories of their own dating history, using "To All The Boys" as the starting point as fans adapt the title to themselves - such as "To All The Boys I've Told My Friends About Too Soon." When Mark Wahlberg shared an Instagram post explaining his morning routine, people were shocked to see how involved it was. He detailed his wake-up time (2:30AM), his workouts (of which there are two), and a cryo chamber session, among other things.

Cardi B reportedly had an altercation with Nicki Minaj. Cardi B had an amazing year, becoming one of the most successful artists of 2018. But one of the moments that the internet talked about most is when she reportedly got into an altercation with rapper Nicki Minaj during a New York Fashion Week party that spurred much back-and-forth between the two.

Cardi was allegedly elbowed in the face by a security guard before reportedly throwing a high-heeled shoe at Minaj. After Cardi was escorted out barefoot with a bump above her eye, both stars took to social media after the clash. Words have continued to be exchanged online, with no resolution in sight.

Ariana Grande and Pete Davidson's whirlwind romance was the talk of the internet. At the beginning of the summer, Grande began a whirlwind romance with "Saturday Night Live" star Pete Davidson. Grande and Davidson's relationship quickly became a hot topic of discussion.

The internet couldn't get enough of the couple, and a photo of them walking down the street, with Grande licking a lollipop became one of the most-talked-about photos of the year.

The pair moved in together, and even adopted a pet pig called "Piggy Smalls."

Davidson confirmed the engagement on June 21. By October 14, the two had called the whole thing off.

The video for Grande's single "thank u, next" was a sensation. Grande's first number one single "thank u, next" had a record-breaking video which paid homage to different romantic comedies throughout the years.

The video for the single broke the record for the most Vevo views reaching 55.4 million in 24 hours, and three days later became the fastest video to reach 100 million views.

Not only that, but the video came after weeks of anticipation and when it finally dropped, people were quick to meme it and couldn't stop talking about all of its celebrity cameos.

Lady Gaga in "A Star Is Born" also created meme-able moments for fans. In the film's latest adaptation, Lady Gaga starred opposite director Bradley Cooper. The film, released in October, has surpassed $100 million at the box office, and is nominated for five Golden Globes and two Grammy awards

Gaga's go-to description of working with Bradley Cooper even created a viral meme of Gaga saying "there can be 100 people in a room, and 99 don't believe in you, but I had this guy" which began to circulate in early November. Fans quickly commandeered the phrase, and Gaga said it so many times there are even YouTube compilations of the iconic moment.

Related Links
11 celebrity couples who met online
Kanye West covers his laptop camera with tape
From Beyoncé to Alicia Keys, the world is going nuts for South Africa's Maxhosa by Laduma knitware
Next on Business Insider
Biden says monkeypox cases are something 'everybody should be concerned about'