The best brain-teasing puzzles that stumped the internet in 2019 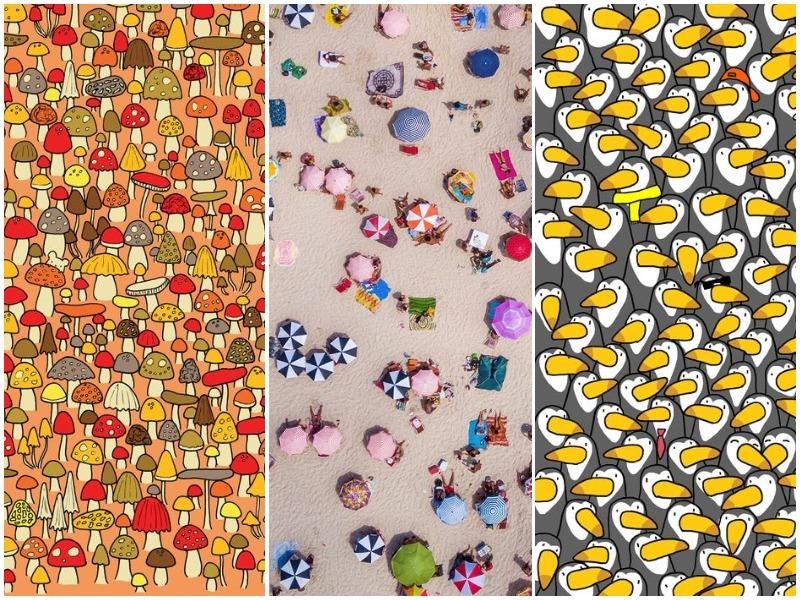 Get ready to test yourself with some of the most baffling brainteasers of the year.
Gergely Dudás/Dudolf, Courtesy of GalaBingo.com
Everyone loves a good brainteaser. From math equations that stumped the internet to illustrations with hidden objects, people enjoyed taking on viral challenges in 2019.

Here are our favourite brainteasers of the year.

Can you tell which giraffe doesn't have a twin with matching spots? 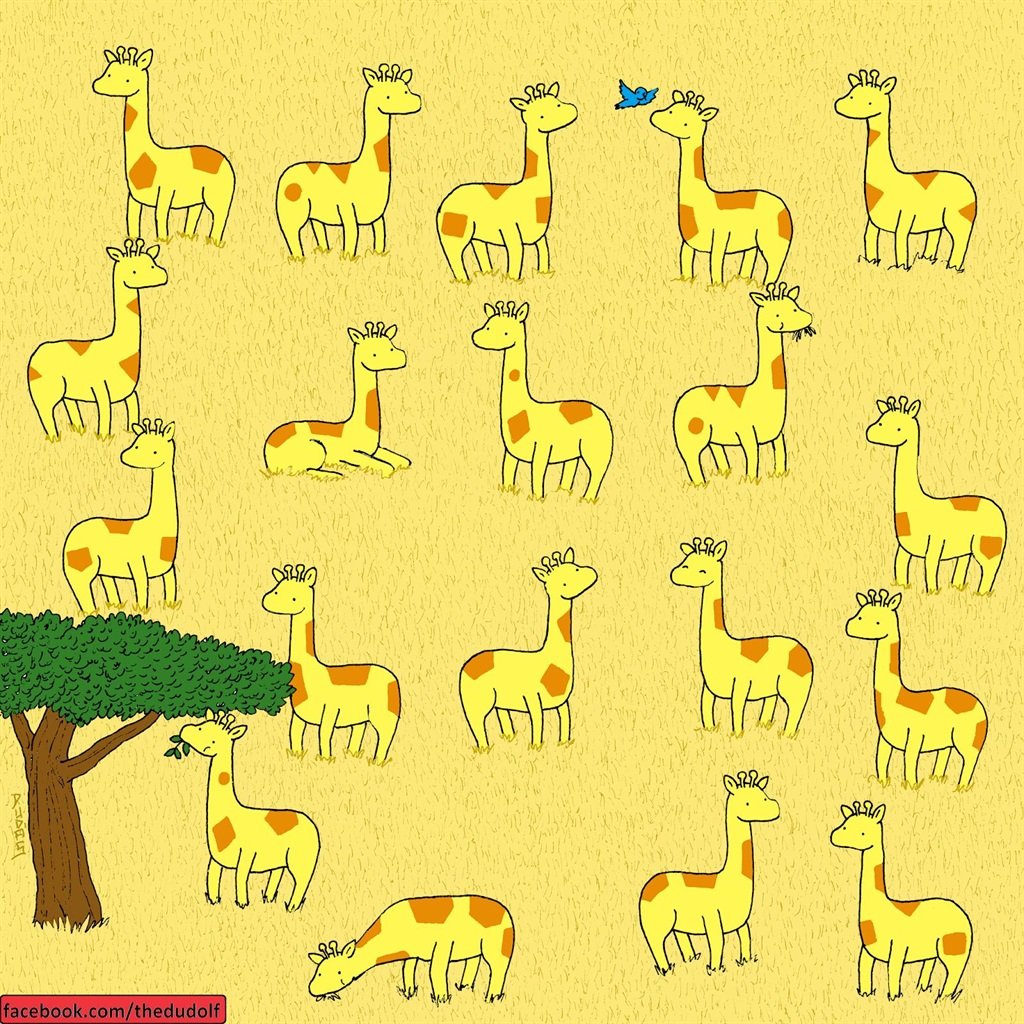 In this brainteaser by Gergely Dudás, there are 19 giraffes - nine pairs with identical spots and one outlier with different spots. Can you tell which one doesn't match?

This giraffe is the odd one out. 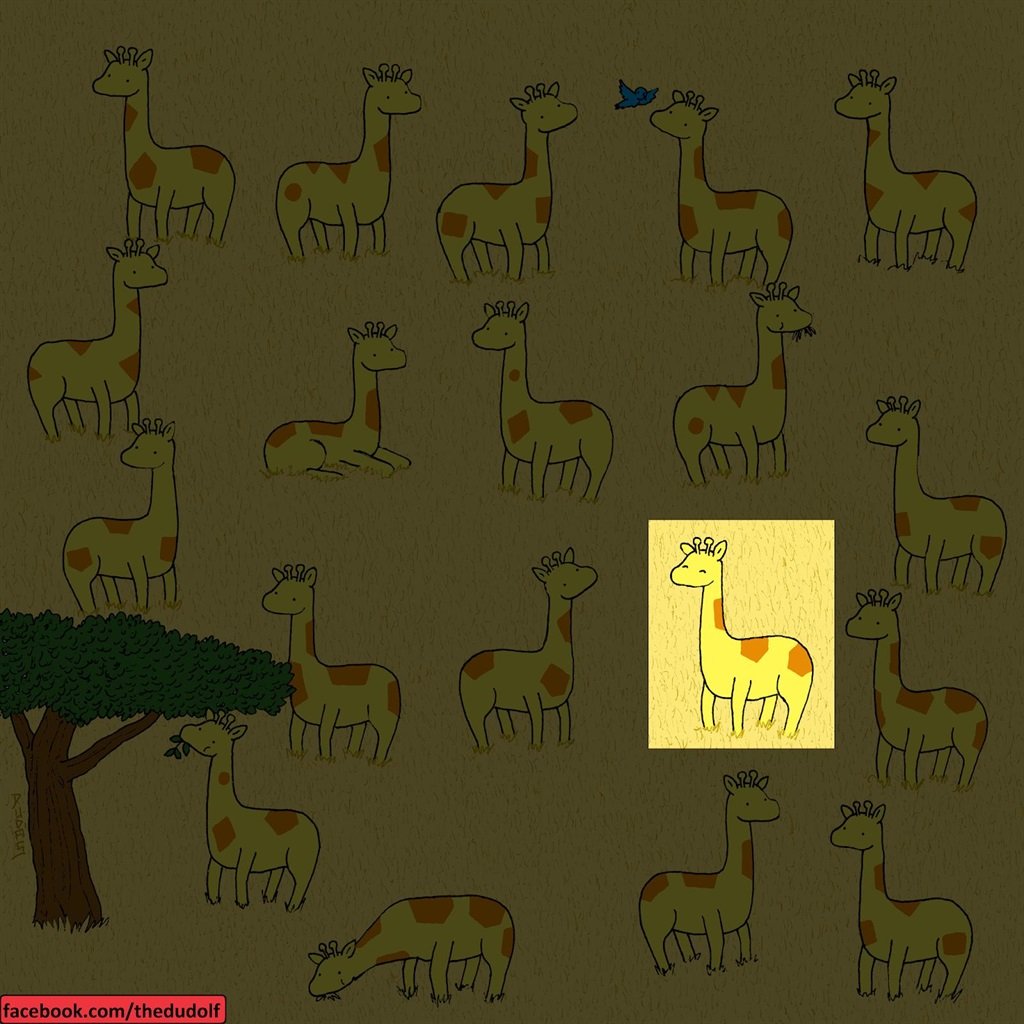 The second giraffe from the right's pattern of spots is unmatched by any of the other giraffes.

For Valentine's Day 2019, Dudás hid a heart in this image. Can you find it? If you're stuck, here's a hint: It's near the owls.

The tiny heart is sandwiched between four flowers. 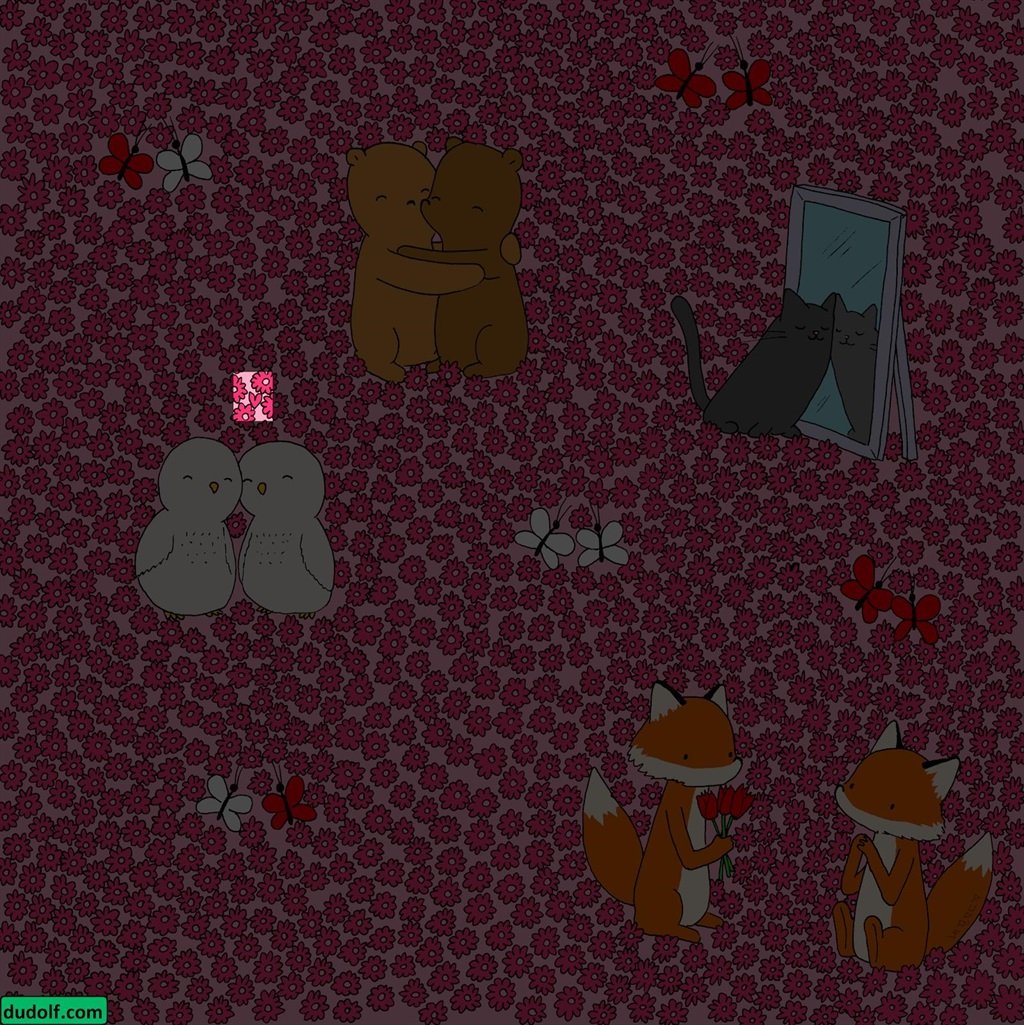 Right above the cuddly owls, there's a heart concealed between four flowers.

This equation has 2 wildly different answers depending on what you learned in school, and the internet was divided. 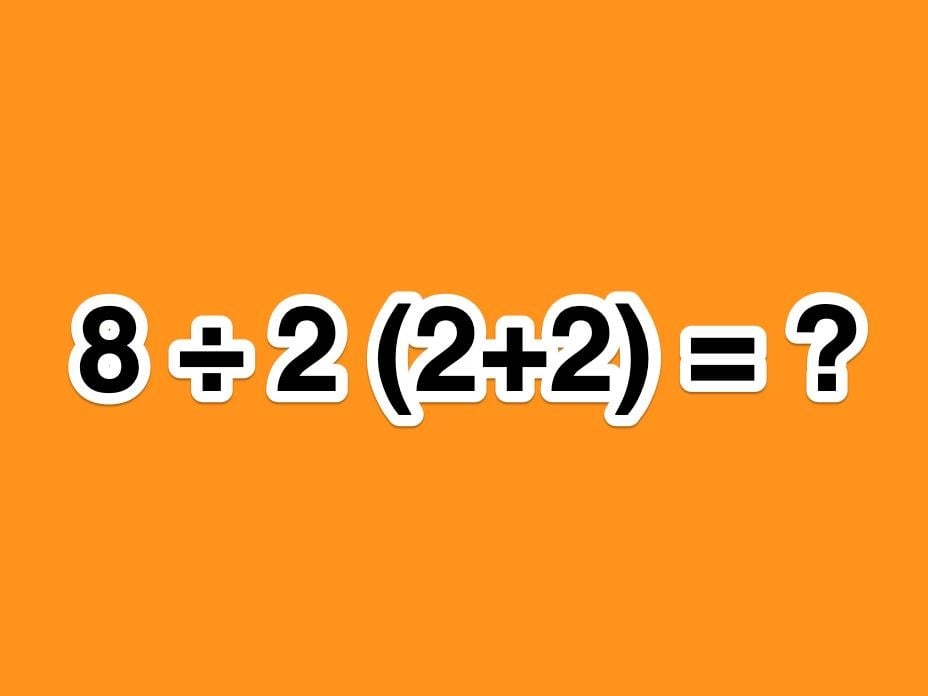 Twitter user @pjmdoll shared a math problem in July that garnered over 20,000 replies with people arguing about the correct answer.

First, add the numbers in the parentheses.

Then, do the multiplication and division from left to right.

The confusion was caused by the difference between modern and historic interpretations of the order of operations, known as PEMDAS. Read the complete explanation here.

It took people an average of 11 seconds to find the gift hidden in these bows. Can you beat that time? The illustrated brainteaser shows dozens of multi-coloured bows. One is attached to a wrapped present, but it's hard to tell where the box is.

The gift is connected to a red bow. 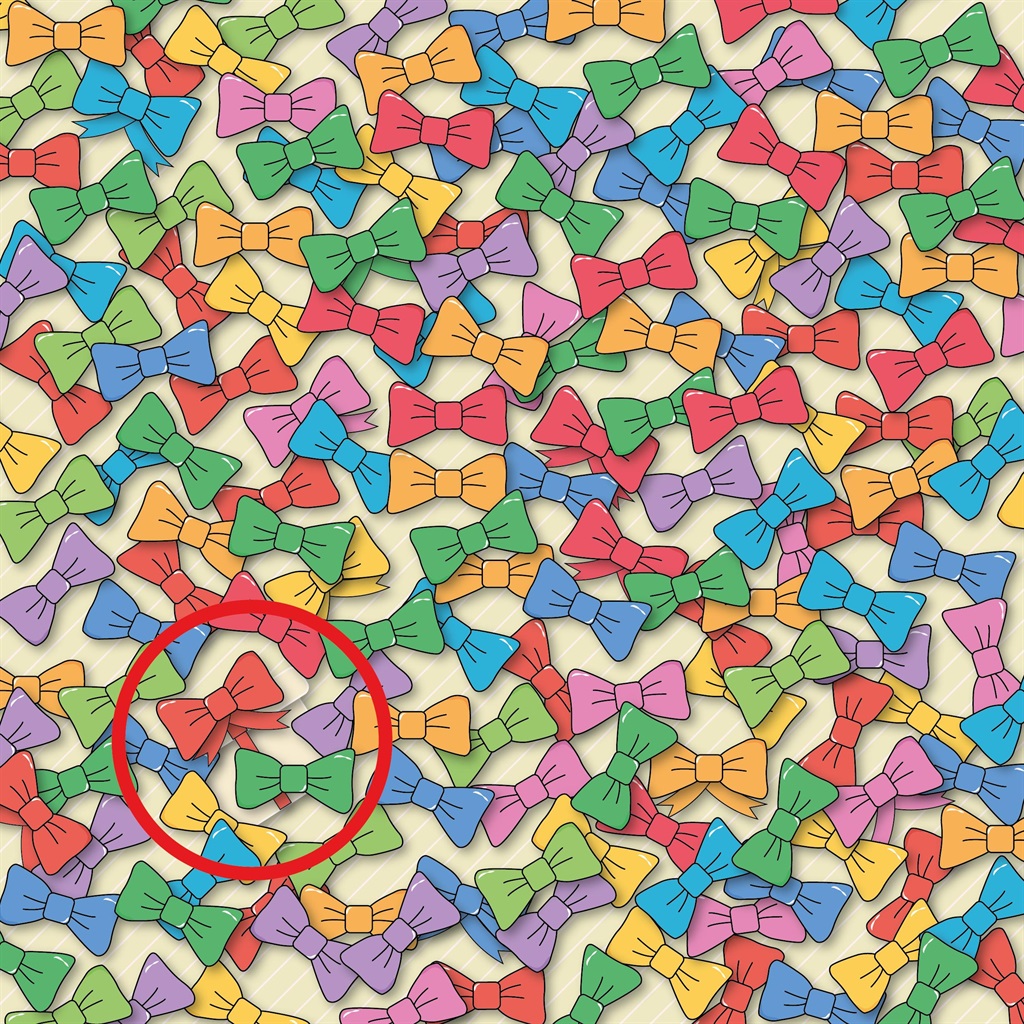 The gift box is near the bottom left corner, camouflaged by the multi-coloured bows.

Can you find the unlocked padlock in under nine seconds? Courtesy of The Smartcard Store

According to The Smartcard Store, nine seconds is the record for finding the unlocked padlock.

The unlocked padlock is near the bottom left-hand corner of the image. 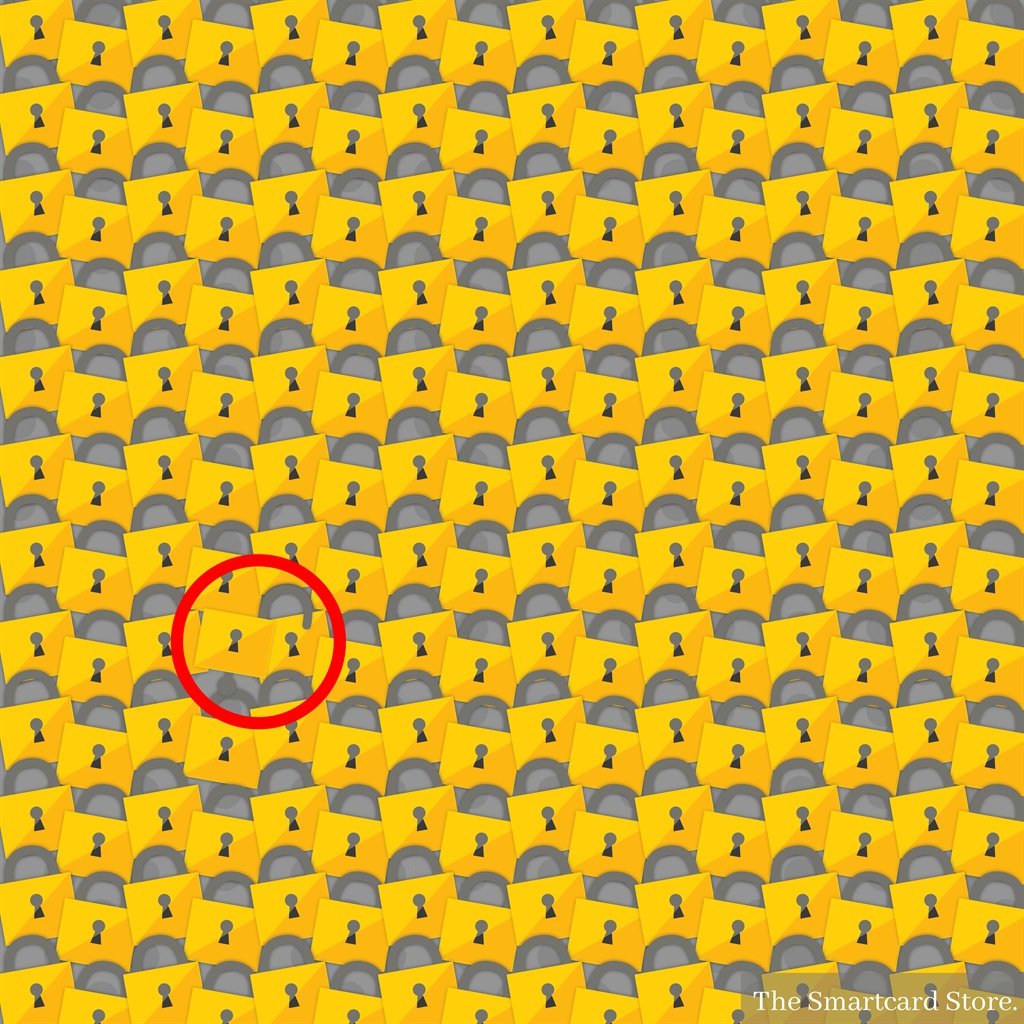 Courtesy of The Smartcard Store

Did you find it in under nine seconds?

In another illustration, Dudás hid a penguin among a flock of toucans. 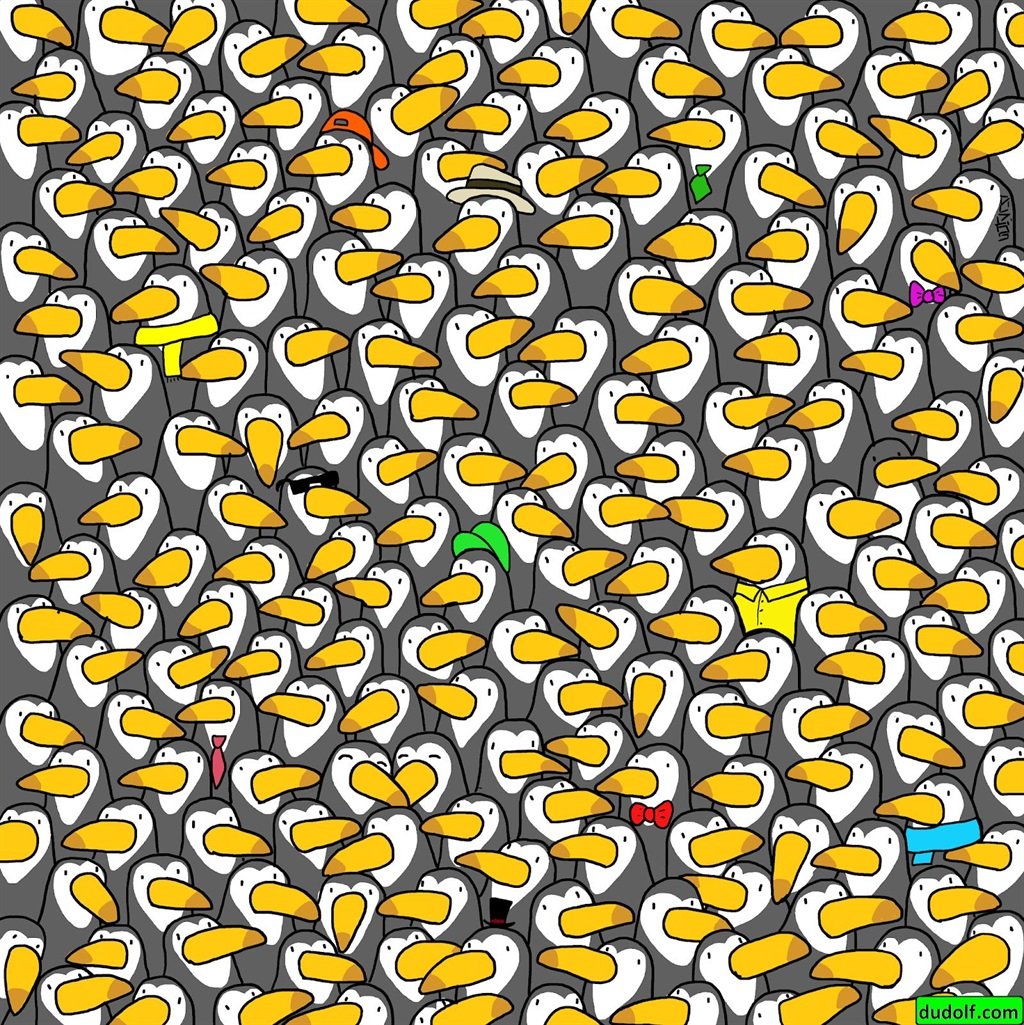 Can you spot the penguin?

The penguin is on the right side of the image. 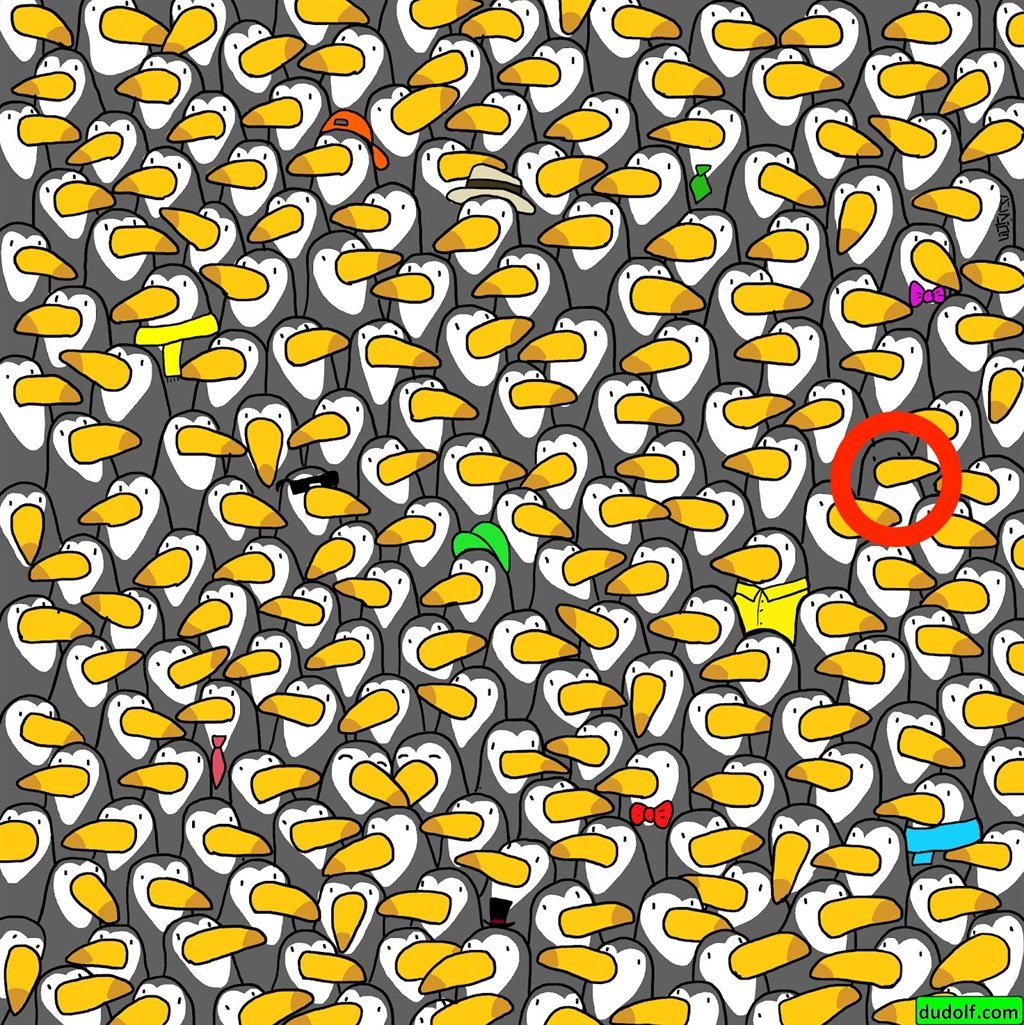 The penguin has a grey face with a white belly, while the surrounding toucans have white faces and grey bodies.

95% of people can't spot the cocktail umbrella in this photo in under a minute. Can you? GalaBingo.com shared this summer-themed brainteaser in honour of the American Fourth of July holiday in 2019.

The paper cocktail umbrella blends in with the other beach umbrellas, but something about it is different. The cocktail umbrella is crinkly with more prominent sections than the other umbrellas.

For Easter, Dudás challenged people to find the baby chicken among rabbits. The chick seems like just another Easter egg, but you can see its face if you look closely. It's hiding behind the ear of a rabbit in the bottom left corner.

There's a mouse concealed inside this field of autumnal mushrooms. Where is it? Here's a hint: It's hiding behind a mushroom with an orange cap.

The mouse is hard to spot, but it's there. 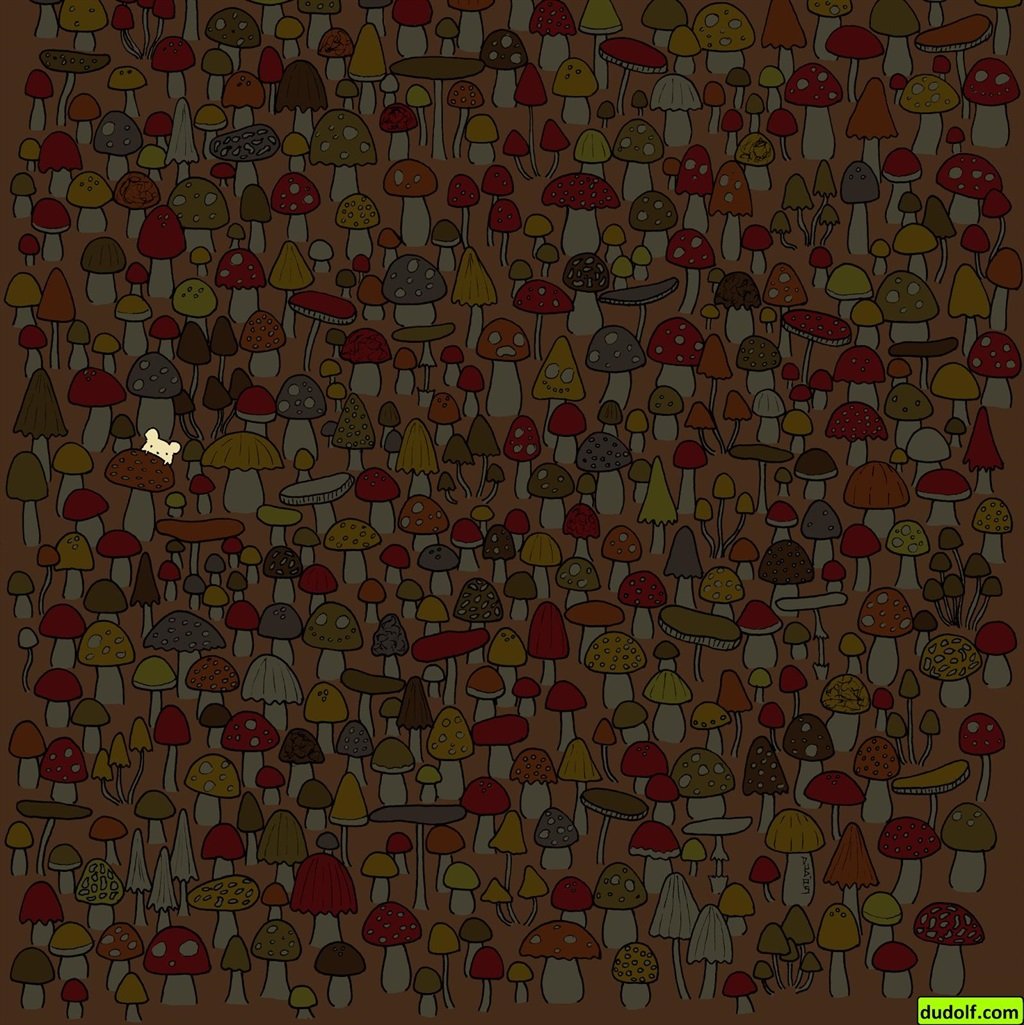 The mouse is on the left side of the image, peering out from behind an orange mushroom.

For Halloween 2019, Dudás hid a cat among bats in this brainteaser. Can you find the cat? Want a hint? It's the only creature without wings.

It's hiding in the bottom left corner. 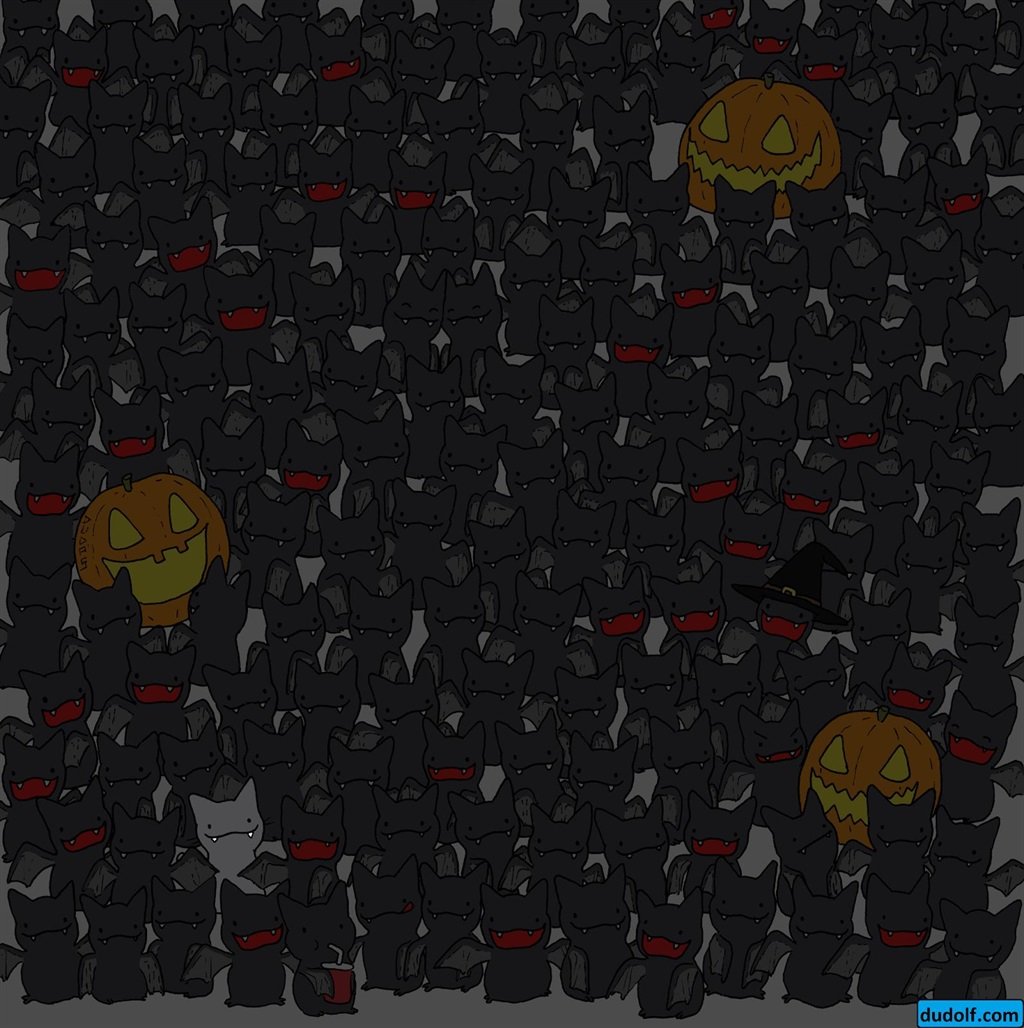 The cat blends right in with the bats.

The average person takes 15 seconds to find the hidden bat in this brainteaser. Can you beat that time? Burton Roofing, a construction supplier in the UK, challenged people to find a hidden bat in an image filled with building tools.

This tricky brainteaser actually has the bat sleeping upside down, making it even harder to locate. This Halloween brainteaser was a tough one.

Can you find the mouse hidden among squirrels in Dudás' brainteaser? 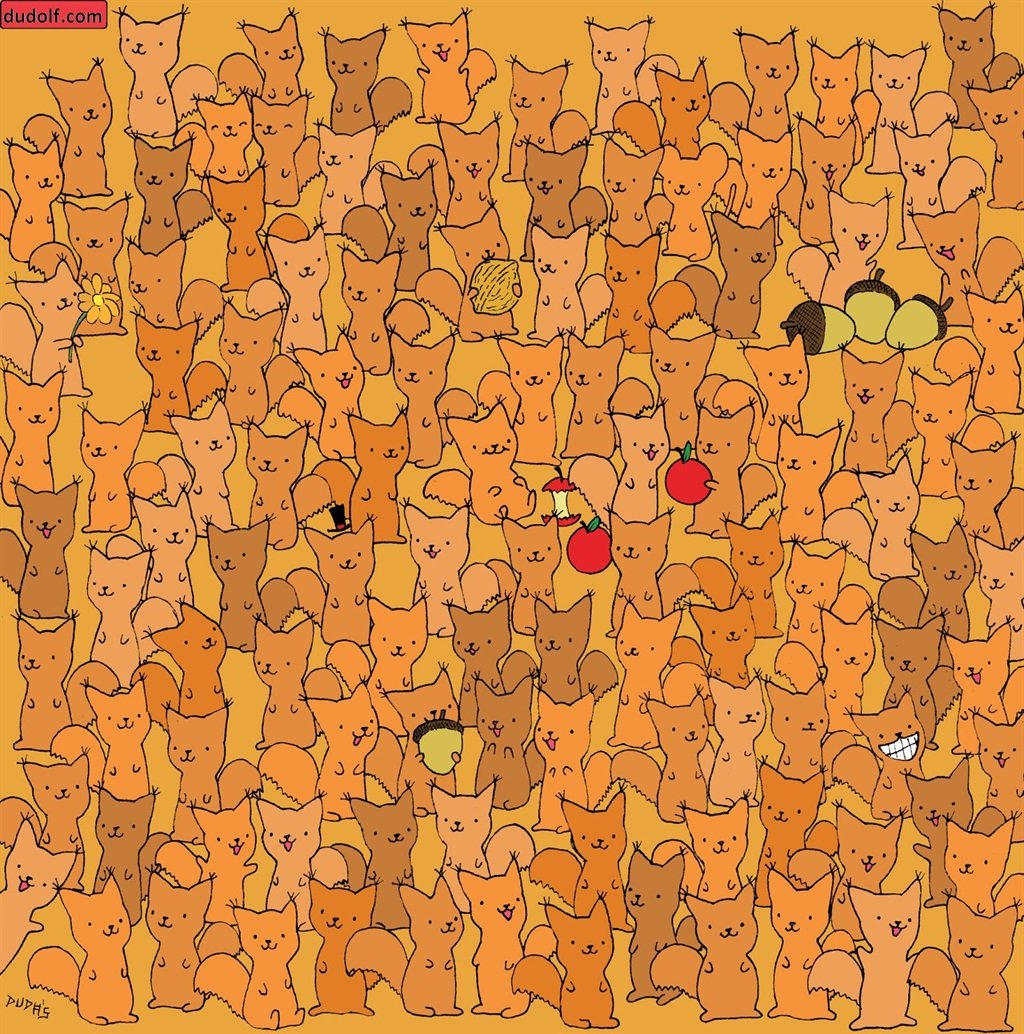 In this recent challenge, Dudás hid a mouse somewhere among a crowd of squirrels. Can you pick it out?

It's a difficult one, but the mouse is hidden near the top right corner. 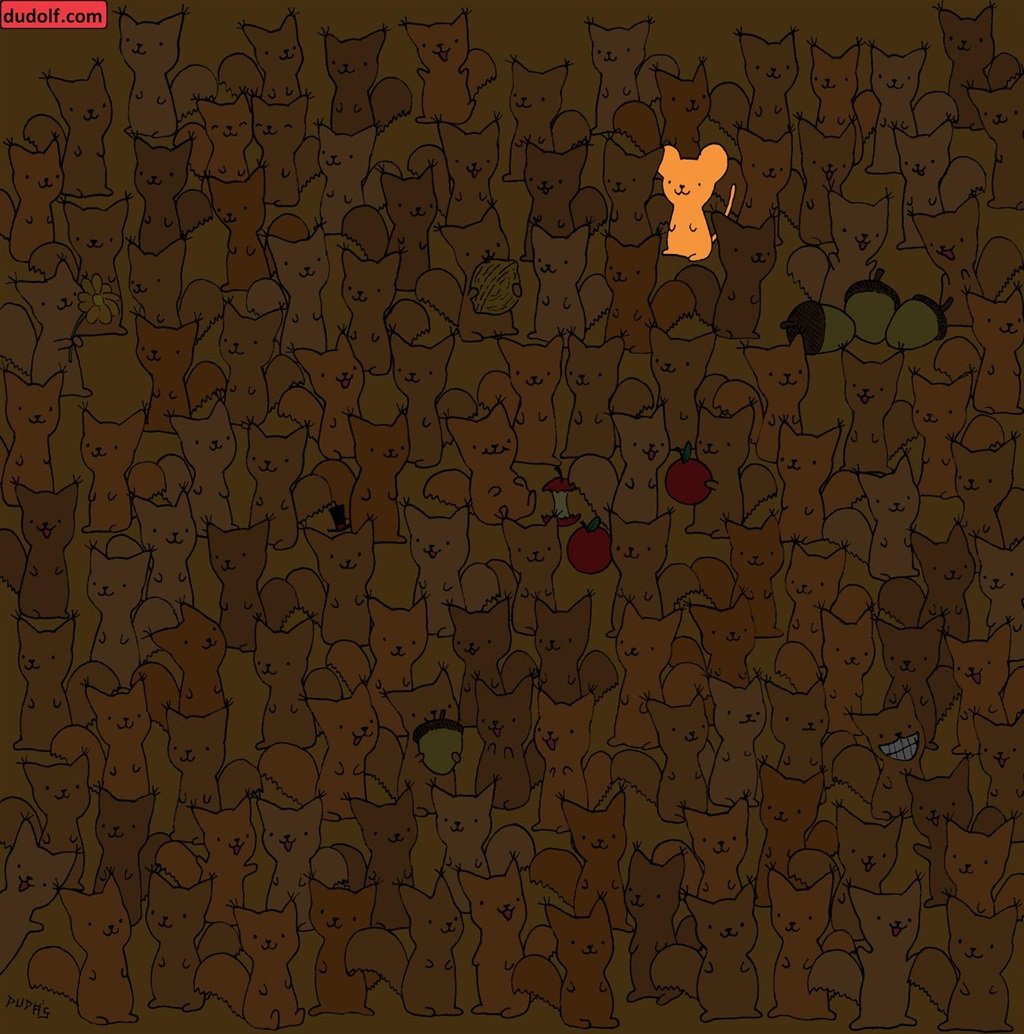 Its round ears and thin tail give it away.

There are 12 pairs of rabbits with matching patterns here — but one rabbit doesn't have a twin. Can you find the odd one out? Pay special attention to the patterns on their on their ears, faces, and bellies.

No other rabbit has a darker yellow pattern on both of its ears and around its nose. 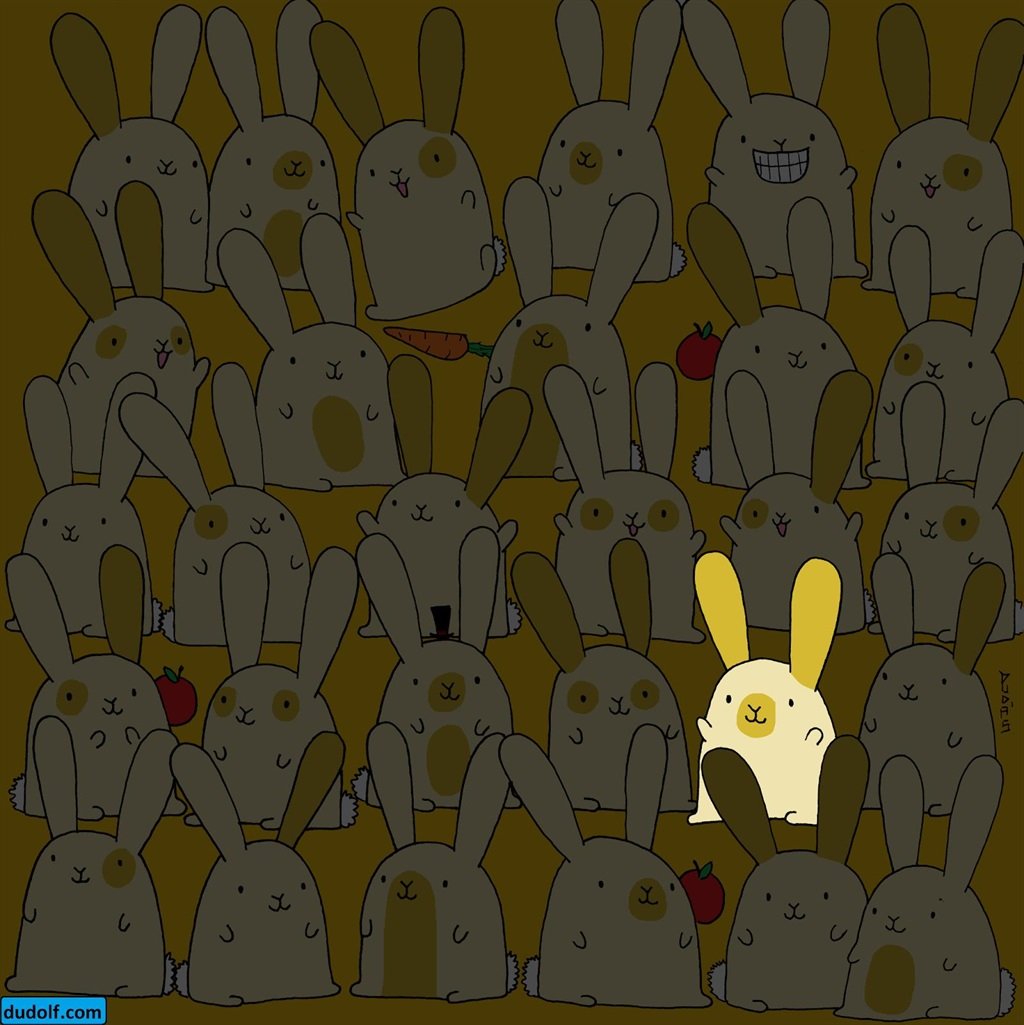 How easily did you find it?