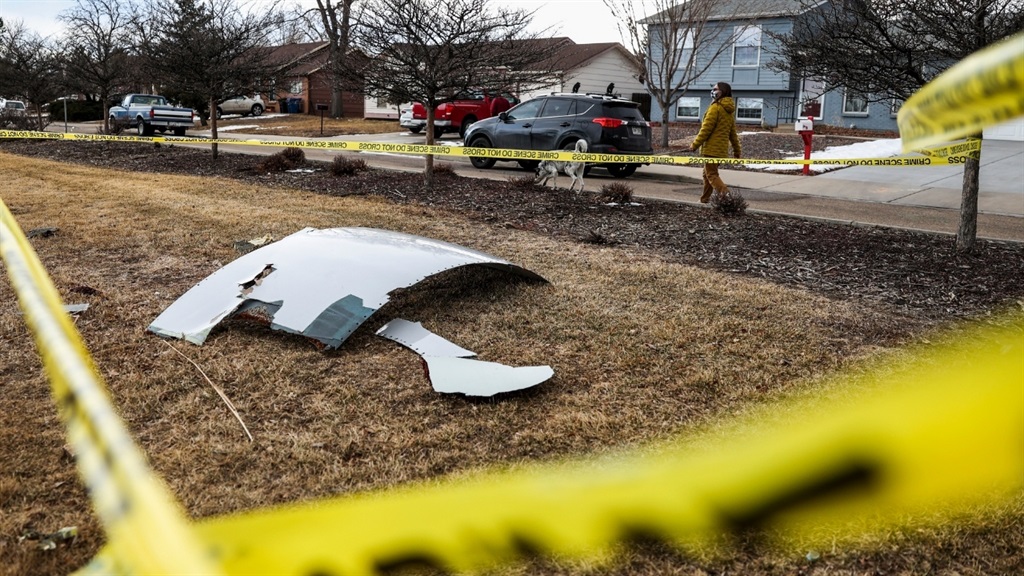 Pieces of an airplane engine from Flight 328 sit scattered in a neighborhood on February 20, 2021 in Broomfield, Colorado. (Photo by Michael Ciaglo/Getty Images)

Several videos posted on social media on Saturday showed United Airlines flight 328 soaring through the sky with one engine on fire just before the plane landed safely at a Denver airport.

The plane, a Boeing 777-200, dropped debris throughout several Colorado neighbourhoods, including a massive piece that narrowly missed someone's home.

None of the flight's 231 passengers and ten crew members were injured, nor was anyone on the ground below, authorities said. One video showed the engine rattling ominously and engulfed in flames.

Another video from a driver's dashboard camera showed the moment the engine exploded in the sky, leaving behind a plume of black smoke.

Photos from after the landing showed charred remnants of the engine.

The plane had taken off from Denver International Airport in Colorado, en route to Honolulu, Hawaii. It safely returned to the airport shortly after takeoff.

In another video, passengers could be heard cheering and clapping after the plane touched down.

The Federal Aviation Administration said in a statement that the flight had experienced a right engine failure after takeoff. Both the FAA and the National Transportation Safety Board are investigating the incident.

Read the original article on Business Insider
Related Links
Boeing 737 crash in Indonesia was unlikely the result of a design flaw, says aviation expert
Parents whose children died in the 737 Max crashes are haunted by the plane's imminent return
Boeing 737 Max, the plane grounded since 2019 after two fatal crashes, is safe to fly again
Next on Business Insider
American Airlines stopped a family from boarding a flight after they said their daughter had special needs