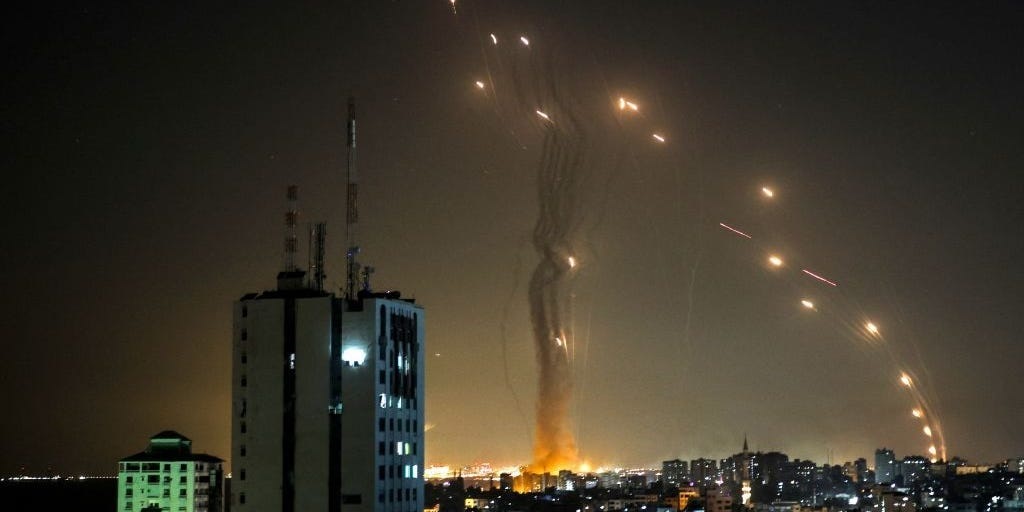 A rocket launched from Gaza is intercepted by Israel's Iron Dome system, May 11, 2021.
Photo by MOHAMMED ABED/AFP via Getty Images

The Israel Defense Forces released a stunning video of its Iron Dome defense system filling the sky with interceptors as more than 100 rockets rained down on Tel Aviv on Tuesday evening.

Tensions between Israel and Hamas spiked sharply this week as Israel carried out airstrikes on Gaza after militants fired rockets into Israel. The fighting, which looks to be some of the most intense since a 2014 conflict, has already left dozens dead, the Associated Press reported.

Though there have been losses on both sides, the majority of the casualties have been on the Palestinian side and have included both militants and civilians.

During the fighting Tuesday, an Israeli airstrike hit a high-rise building. "We expect that this powerful attack on the high-rise building, which shook all of Gaza, will lead to extensive shooting toward Israel," an IDF spokesperson said, according to Haaretz.

"The Al-Qassam Brigades has launched the largest missile strike on Tel Aviv and its environs, with 130 missiles, in response to the enemy's targeting of civilian high-rises," Hamas said in a statement Tuesday evening, The Times of Israel reported.

The IDF posted its defense of the city on Twitter.

RAW FOOTAGE: This is the moment the Iron Dome intercepted a barrage of rockets over Tel Aviv and central Israel. pic.twitter.com/8jl8OTgWCl

Another angle of the defense of Tel Aviv was posted by a former IDF spokesperson.

Israel's Iron Dome defense system is a counter-rocket, artillery, and mortar (C-RAM) and short-range air defense system designed to intercept rockets and artillery. The system has been in place since 2011 and has helped reduce casualties from rocket attacks against Israeli cities.

The defense system was developed by Israeli defense firms Rafael Advanced Defense Systems and Israel Aerospace Industries with support from the US. It works alongside the David's Sling and Arrow interceptors, which counter medium- and long-range threats.

It is very effective, with a reported success rate of more than 90%, but it is not impenetrable.

One of the 100s of rockets that were just fired from Gaza toward Tel Aviv and central Israel exploded on a civilian bus. Hamas’ intentions are clear: kill Israeli civilians.We won’t stand by and let this happen. pic.twitter.com/aNsA3dlgMe

Late Monday, the IDF posted to its official Twitter account video of its defense against another Hamas rocket attack on Ashkelon.

INTERCEPTED:Terrorists recently fired another barrage of rockets from Gaza toward the Israeli city of Ashkelon. We intercepted the rockets with the Iron Dome Aerial Defense System, and are now striking Hamas terror targets. pic.twitter.com/5i87BRAgDn

The recent escalation in violence, coming during the Muslim holy month of Ramadan, is driven by a number of historic and immediate factors.

The ongoing Israeli occupation of Palestinian territories remains at the center of the animosity, but more recently, the planned evictions of Palestinian families from the Sheikh Jarrah neighborhood of East Jerusalem has stoked tensions and sparked demonstrations.

Prior to the latest exchange of fire, Israeli police raided the al-Aqsa Mosque compound in Jerusalem, one of Islam's holiest sites. Police fired fired rubber-coated bullets, stun grenades, and tear gas in the compound, Reuters reported. While 21 officers were wounded, over 300 Palestinians were injured in the process, according to Palestine Red Crescent Society.

At least 28 people were killed by the Israeli airstrikes Tuesday, including ten children and a woman, the Associated Press reported. At least three Israelis have been killed by the barrage of rockets fired by militant groups in Gaza, and at least ten more were injured.

"Any loss of civilian life is deeply lamentable, whether it is an Israeli life or a Palestinian life. That is why we continue to call for calm, continue to call on all sides to de-escalate and exercise restraint," State Department spokesperson Ned Price said on Tuesday.

Meanwhile, Israeli Prime Minister Benjamin Netanyahu on Tuesday warned Israel would "increase both the intensity of the attacks and the rate of attacks."