The 16 biggest games coming soon, from an all-new ‘Fallout’ to the hotly-anticipated ‘Red Dead Redemption 2’ Can you smell it in the air? This year's "Madden" is almost here, its annual mid-August launch signalling the coming wave of blockbuster video games about to arrive on the PlayStation 4, Xbox One, Nintendo Switch, and PC.

Huge new entries from already massively popular franchises are the standouts this year, and "Red Dead Redemption 2" (seen above) is the heaviest heavy of them all. The long-awaited sequel to Rockstar Games' brilliant original "Red Dead Redemption" is a kind of "Grand Theft Auto" meets "The Magnificent Seven" — a fitting game from the folks behind the "Grand Theft Auto" series.

But this autumn's not all cowboys and train robberies. Below, we've put together the 16 biggest games slated to arrive in the biggest game release season of the year: Every year, another "Madden" game. 2018 is no different, with the latest entry in the football simulation series arriving this August.

A handful of changes are being made this time around, like every year, but let's be honest: You're not buying "Madden" because of changes. Is anyone? "Madden NFL 19" is simply the latest iteration of a formula that's been working for over 25 years, which is exactly what it's supposed to be. The new "Spider-Man" game — a PlayStation 4 exclusive game — features a massive New York City that you can swing around, with plenty of enemies to pummel along the way. It's focused on re-creating the "Spider-man" experience as closely as possible

This is the classic Peter Parker/Spider-Man you already know and love.

"Our Spider-Man features a 23-year-old Peter Parker who has become a masterful Spider-Man," the game's creative director, Bryan Intihar, said of the game. "While he may be more experienced, Peter and Spider-Man's worlds continue to collide as he tries to juggle them." For the 2oth anniversary of the NBA 2K series, newly minted Los Angeles Laker LeBron James is gracing the cover.

As per usual, "NBA 2K19" is a gorgeous basketball simulation — the basketball equivalent of "Madden" for football. It sets the standard for sim basketball games. Also like "Madden," it doesn't change too much from year to year.

The focus is on updating the game to be a strong reflection of the current NBA, and it consistently delivers on that. Expect "NBA 2K19" to continue that tradition.

4. "Shadow of the Tomb Raider" "Shadow of the Tomb Raider," the third game in the rebooted Tomb Raider franchise, once again starring Lara Croft as she traipses around the world discovering ancient ruins and leaving a wake of enemy corpses.

In the clips of the game shown off thus far, "Shadow" appears to be a more brutal version of the Lara Croft we know from previous "Tomb Raider" games. Look no further than the direct nod to "Apocalypse Now" seen above, pulled from the last major trailer, for an idea of how brutal it may get.

Lara's goal in "Shadow" is to halt the Mayan apocalypse. Can she/you do it? You'll be able to find out soon enough. There are few better racing games available than the "Forza Horizon" series of open-world, arcade-style racing.

The latest game in the series, "Forza Horizon 4," features gorgeous visuals, a massive range of real cars, and huge open environments. But that's to be expected from "Forza" at this point: What's new this time is its seasons system that lets players experience Britain as it changes throughout the year. More than just a re-hash of previous "Mega Man" games, "Mega Man 11" is an evolution of the series that impacts the visuals and gameplay in exciting ways. For instance:

It's the same 2D gameplay, but the visuals are a far sharper 3D look. It's also clear from the game's debut trailer that "Mega Man 11" gameplay is borrowing moves from across the franchise. Having assassinated all the bad guys in Ancient Egypt, the "Assassin's Creed" series is moving on to Ancient Greece in the next instalment. It's called "Assassin's Creed Odyssey," and it takes the series to the world of Spartan warriors and Homeric myth.

"Odyssey" stars two new protagonists of your choice, one male and one female. You're the descendant of a great Spartan hero, fulfilling your destiny.

Like the past several games in the series, you'll control boats and horses on your journey of assassination and discovery. Instead of scaling pyramids, though, you'll be scaling Greek statues in places like Delos, Athens, and Sparta. Love Mario, minigames, and madness? "Super Mario Party" is right up your alley.

Like previous "Mario Party" games, the latest entry for the Nintendo Switch features a combination of minigames and a larger board game-like structure. It's silly, and frantic, and intended to bring friends together.

In "Super Mario Party," the series will take advantage of the Switch's many different functions (like tracking motion, for instance).

Forget about previous "Call of Duty" games — "Black Op 4" is something very different. The game is entirely focused on multiplayer, with story moments only coming from the "Zombies" mode.

"Call of Duty: Black Ops 4" is still a first-person shooter, of course. But it's the first "Call of Duty" to completely skip a traditional campaign mode.

In addition to the standard Deathmatch and Zombies multiplayer modes, "Black Ops 4" is adding a new mode called "Blackout" — the "Call of Duty" take on the "Battle Royale" genre popularised by "PlayerUnknown's Battlegrounds" and "Fortnite." In celebration of the franchise's 20th anniversary, a new "Soul Calibur" game is in the works. The game's debut trailer showcased series mainstays Mitsurugi and Sophitia, and the first previews of the games have been very positive. "Battlefield 5" is set in World War II, but isn't intended as homage — it's a setting for large-scale multiplayer combat. To that end, there's a level of character customisation in "Battlefield 5" that's unprecedented in the series.

But that's not the only big change coming in "Battlefield 5": The game is getting a Battle Royale mode, a major new single-player expansion, and the ability to rebuild/fortify defenses. And, as ever, "Battlefield 5" is a ridiculously pretty game. The "Red Dead" series is beloved by gaming fans for its vivid storytelling and its massive open-world. Like "Grand Theft Auto," you're in control of a protagonist from the third-person perspective, and you navigate a massive open-world with missions, side missions, and all sorts of ridiculous characters. Following on the heels of the sleeper success "Hitman," everyone's favourite bald assassin is returning in "Hitman 2."

The new game features a new set of scenarios for Agent 47 to navigate, always with the end goal of eliminating one (or several) targets. In "Hitman 2," you and a partner will be able to tackle assassinations together — a first for the long-running "Hitman" series. A little "Smash Bros.", anyone?
YouTube/Bethesda

"Fallout 76" is the next entry in the long-running, beloved "Fallout" video game series.

It's coming to the PlayStation 4, Xbox One, and PC, and it's being developed by the same renowned studio that created "Fallout 3," "Fallout 4," and "The Elder Scrolls V: Skyrim."

Instead of a traditional, single-player "Fallout" experience, "Fallout 76" is an online-focused game. All the characters you'll find in the wasteland are other real people — a major change from previous games. The game is set earlier than previous games in the lore of the "Fallout" world, soon after the nuclear apocalypse has occurred. You're tasked with rebuilding humanity. No pressure! But what are they? Here's how Nintendo puts it:

"Inspired by 'Pokémon Yellow,' which was originally released in Japan on Nintendo's Game Boy in 1998, these two new titles feature many of the intuitive gameplay functions offered to players in the hugely popular 'Pokémon Go' and are designed for players taking their first steps into the Pokémon video game world."

Given the inspiration, both games are set in the Kanto region, the locale of the original Game Boy games. Instead of random encounters with unseen Pokémon, you'll actually see the creatures living their lives. And instead of selecting a Pokéball and pushing a button to catch Pokémon, you can flick your controller, the same way you would swipe your finger in "Pokémon Go."

There's also a Pokéball controller (sold separately) that allows you to mimic the motion of throwing a ball to capture a Pokémon. That the games will be familiar to "Pokémon Go" players is no mistake.

Millions of people experienced Pokémon for the first time with the hugely popular mobile game, so it makes sense to ease those new players in with familiar trappings. In the same vein, the games will offer interoperability with "Pokémon Go," as well as two-player cooperative action. 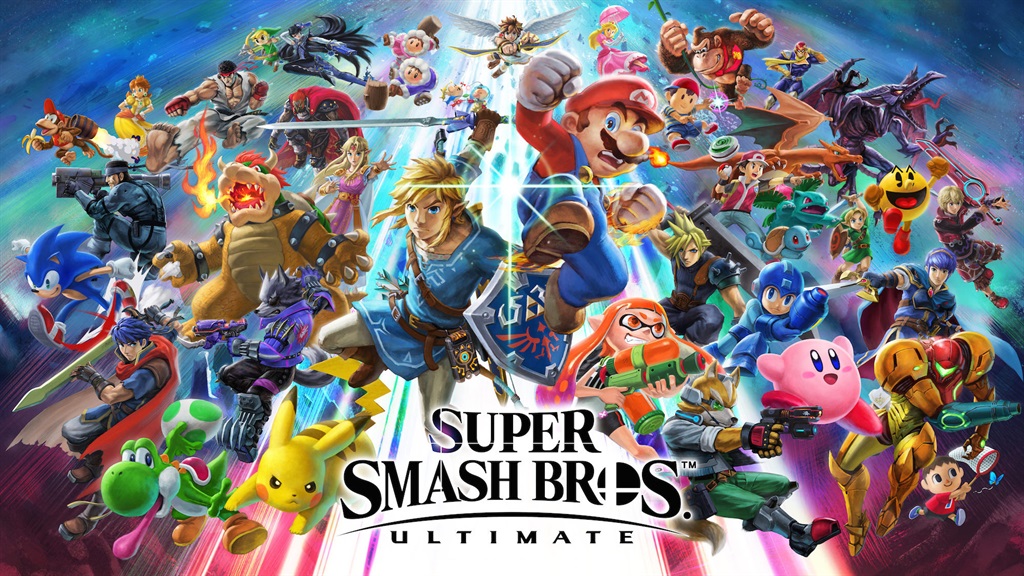 A little "Smash Bros.", anyone?
Nintendo

If you've never played a "Smash Bros." game, think of it as a fighting-game version of "Mario Kart."

Nintendo's large cast of famous faces — from Mario to Donkey Kong, Pikachu to Princess Peach — take each other down in a simplified fighting format. They each have their own set of moves and traits that map to that character — Pikachu shoots lightning, Mario throws fireballs, Link wields the Master Sword, etc.

Rather than taking players on one at a time, "Smash Bros." distinguishes itself by throwing anywhere from two to eight players into a match at any given time. It's a chaotic, silly, surprisingly deep fighting-game series with a serious following.

And in 2018, it's coming back: The series is headed to the Nintendo Switch this December as "Super Smash Bros. Ultimate." The "ultimate" subtitle is a reference to this new game containing literally every previous character ever playable in the series, from Mario to Greninja.