Video captured at a Seattle Black Lives Matter protest on May 30 shows a young boy recovering after being hit with mace sprayed by police.
Screenshot/Evan Hreha

Video footage captured at a Seattle protest on May 30 showed a small child being maced by police. The distressing footage was posted online by a man named Evan Hreha, who attended the Black Lives Matter demonstration.

"First person maced is a little girl," Hreha wrote in a caption alongside the video, originally mistaking the young child for a girl. "What the f--- is wrong with you people."

Several days later, at another Black Lives Matter protest, Hreha was arrested for unlawful discharge of a laser. He was held in jail for two days before being released, according to King County Jail records.

Hreha told The Guardian that he believes his arrest was in retaliation for the video he captured of the young boy being tased during earlier demonstrations.

"It just kind of shattered that false narrative that was in my head that cops always protect and serve," Hreha told the outlet.

What happened at the protests 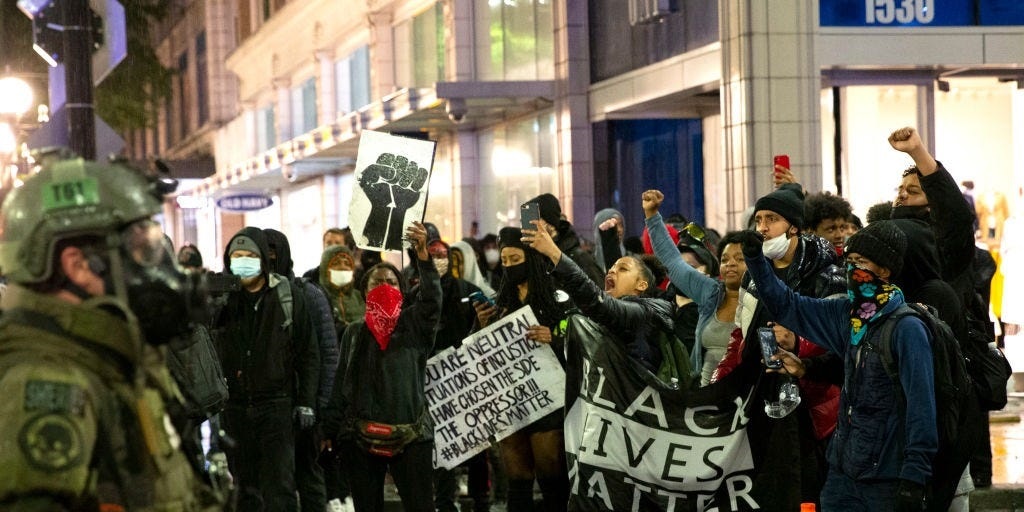 Hreha had been attending a Black Lives Matter protest in Seattle, Washington, on May 30. Mando Avery was also there with his family, including his seven-year-old son, he told The Guardian.

Seattle Mayor Jenny Durkan announced a 5 p.m. curfew that night in order to quell protests inflamed by the death of George Floyd, who was killed by a police officer that knelt on his neck for several minutes. According to The Seattle Times, Gov. Jay Inslee activated the National Guard shortly after the curfew began.

The day began with several peaceful rallies, though police used flash bangs and tear gas to break up crowds that continued protesting into the evening. There were reports of break-ins and looting in downtown Seattle. Seattle Police Chief Carmen Best said in a statement that 27 people were arrested that evening.

Hreha told Komo News that in the video he captured, there were about 50 people "facing off against the cops" at around 3 p.m. during a peaceful protest at Seattle's Westlake Park.

But the protests soon turned violent as police retaliated against the protesters "out of nowhere," Avery told The Guardian. His seven-year-old son was hit in the face with mace during the clashes.

"I would say that [police] were targeting my boy," Avery told The Guardian. He said he wasn't sure if police "were trying to set an example or strike fear" into his son, though he said he was most upset that not a single officer nor medical technician stepped in to help.

Hreha captured the aftermath of the young boy being maced in the face. His video begins with the young boy clutching onto his father, screaming in agony. Several protesters attempt to spray the boy with water while another douses him in milk in order to stop the burning.

According to Komo News, Hreha's video led to 11,000 complaints being filed to Seattle's Office of Police Accountability in regard to officer conduct during the May 30 protest.

Andrew Myerberg, the director at the Office Police Accountability, told Komo News that it would be "actively investigating" the officer believed to have been involved in the incident.

On June 7, Hreha attended another protest, where he told The Guardian he helped hand out free hot dogs to demonstraters.

Hreha told the outlet that he was surrounded and arrested on his way home by several officers and "had been identified as someone who pointed a laser in an officer's eye" during the protest, an allegation he denies.

The King County Prosecutor said in a tweet on June 8 that charges were not filed against Hreha, though the Seattle Police Department would be sending the case to Seattle Municipal Court "for consideration of a misdemeanor charge."

The Seattle Office of Police Accountability did not immediately respond to Insider for comment on whether the police involved in the macing incident will be held accountable nor whether Hreha's claims of police retaliation have merit.