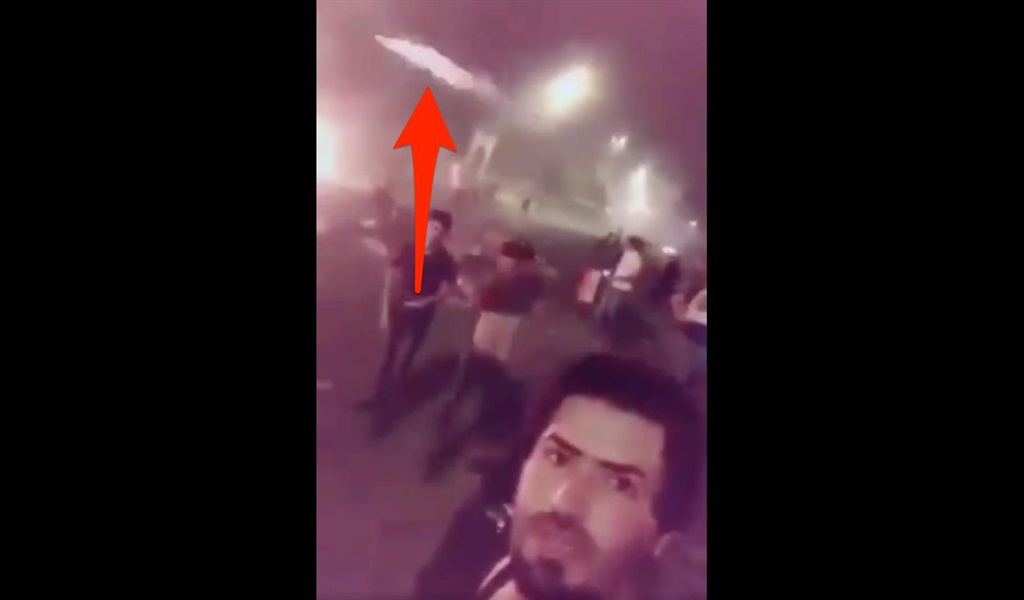 A still from a video posted to Twitter by Iraqi YouTuber Firas W. al-Sarrai on Sunday purporting to show a missile fired into crowds.
Twitter/firasalsarrai

A video shot by a YouTuber in the centre of deadly protests in Iraq appears to show a rocket propelled grenade flying narrowly over his head.

The video was posted from the Sadr City suburb of Baghdad on Sunday night by Firas al-Sarrai, a popular Iraqi Instagram and YouTube personality.

In the video, a man, most likely al-Sarrai, begins introducing himself to the camera, but is cut off as he ducks to avoid a projectile which whistles just overhead. In the background gunshots can be heard.

Business Insider has not been able to independently verify that al-Sarrai is the man in the video.

While al-Sarrai identified the projectile as a "missile," some users on the social media platform identified it as a flare or tear gas grenade.

The Washington Post's Beirut bureau chief Liz Sly said the projectile "seems to be an RPG" on Twitter.

Business Insider has reached out to al-Sarrai and weapons experts for clarification.

Protests against government corruption, high unemployment, and poor public services which started on Tuesday have been met with brutality from the Iraqi government.

Live gunfire met protesters in Baghdad on Sunday, resulting in 10 deaths. The total death toll since protests began stands at 104, a spokesman for Iraq's Interior Ministry said Sunday, according to the Associated Press.

The Iraqi military said "excessive force" was used during clashes on Sunday night in a statement, but said it was the work of rogue agents."Excessive force outside the rules of engagement was used and we have begun to hold accountable those commanding officers who carried out these wrong acts," the full statement said.

Iraqi Prime Minister Adil Abdul Mahdi had tried to pour cold water on protests by imposing a curfew in Baghdad and other Iraqi cities from Thursday, but protesters defied it.

The internet shutdown remained in place as of Sunday night, according to internet freedom monitor NetBlocks.

Update: It has now been 100 hours since #Iraq imposed a near-total internet shutdown amid widespread protests; the disruption comes at a critical time when Iraqis most need a voiceâ±

"I will go and meet them [protesters] without weapons and sit with them for hours to listen to their demands," he said.

According to a statement from the office of US Secretary of State Mike Pompeo, Abdul Mahdi told Pompeo in the wake of Sunday's violence that "control and stability had been restored," Reuters reported.