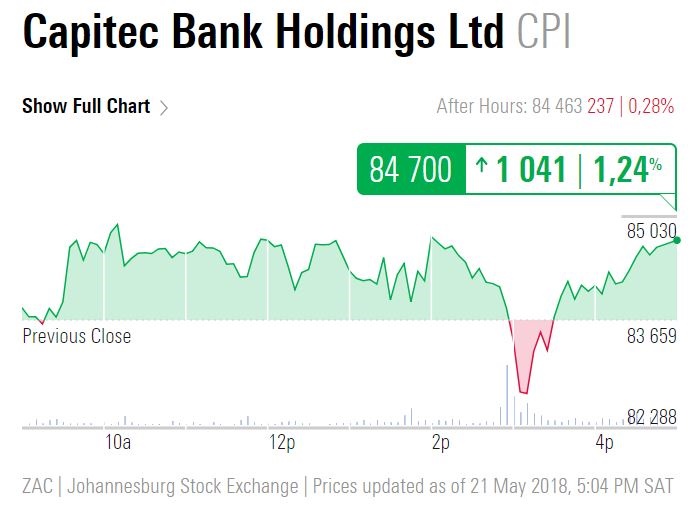 Investors in Capitec have seemingly shrugged off an aggressive new report, which again accused the bank of misleading investors.

“End-of-financial-year announcements in 2018 are reflective [of] deteriorating business conditions and corroborate the continuity of several intentionally misleading accounting practices we have reported in the past,” Viceroy said in an open letter to the Capitec audit committee, with PricewaterhouseCoopers copied in.

Earlier this year, a Viceroy report on Capitec, which claimed that it concealed losses, triggered a bloodbath in its share price.

Capitec lost 25% of its value, and Treasury was forced to step in and defend the bank. Treasury called Viceroy “reckless”and said was “not acting in the public interest nor in the interest of financial stability in South Africa”. Viceroy had been short-selling Capitec shares before the release of the report, “and stood to benefit substantially from forcing the Capitec share price to fall by publishing its speculative report about the bank”.

Viceroy, a small firm headed by a former British social worker, rose to prominence after it highlighted accounting problems at Steinhoff last year.

In its open letter to the Capitec audit committee on Monday, Viceroy claimed that:

Capitec appears to have changed its provisioning method to categorization based on time in arrears as opposed to number of instalments missed. We have been unable to locate a disclosure to stakeholders on this change #thread $CPI 1/3 pic.twitter.com/z6AnaTkMQD

A Capitec spokesperson told Business Insider South Africa that the company received the report on Monday morning, and that it would respond later during the day. “We were expecting it.”

Previously, it said Viceroy's reporting was filled with factual errors and material omissions. It also filed a complaint with the Financial Services Board about Viceroy's activities.

In the first two hours after the document was released on Monday, the share initially fell, but then gathered steam to stage a strong recovery. By late afternoon, it was almost a percent stronger at R843.96 – though still 23% lower than it was before the first Viceroy report was published in January.

“I think Viceroy initially made a mistake in some of their numbers and now has an emotional bias to continue pursuing this route,” says Cassie Treurnicht, portfolio manager at Gryphon Asset Management.

But he agrees with Viceroy’s initial concern that Capitec lowered provisions even though bad debts increased. “A bank can do this whenever it chooses to do so and therefore boost earnings.”

“What we do not know for sure is how different the book looks today compared to the past. I would think that as Capitec matured they would naturally migrate towards a more stable client."

Treurnicht says some of the numbers mentioned in the annual report point to this, for example that loans in the 61-84 months category increased by 51% and that these were extended to higher income earners.

“So, if we place our trust in Capitec management and assume these are the facts, then you can lower provisions accordingly.”

Still, he won’t be buying at the levels. “Capitec continues to look expensive.”

Related Links
After a scam hit a co-founder's family, these SA brothers built one of the most innovative...
One in four South Africans has a Capitec account. Now the bank is offering funeral policies with...
Steinhoff’s latest shareholder note shows a company ‘heading towards liquidation’ says one analyst
Next on Business Insider
Botswana, with an import ban on 16 vegetables, plans to ban more over the next two years