A digital rendition of Van Gogh's "The Starry Night" on display in Paris.
Chesnot/Getty Images

Vincent van Gogh is one of the most famous artists of all time.

A current art exhibit at Paris' Atelier des Lumières highlights the Dutch post-Impressionist painter's work, such as "The Starry Night," "Sunflowers," and "The Potato Eaters" - but not in a conventional way.

Instead of simply displaying Van Gogh's paintings in frames, the exhibit, titled "Van Gogh, la nuit étoilée" (which translates to "Van Gogh, the starry night" in English), gives visitors an immersive viewing experience by having them walk through giant, detailed digital renderings of his greatest works.

Take a tour of some of the art featured in the exhibition, which runs until December 31, 2019, below.

Vincent van Gogh is one of the most famous artists to ever live. The Dutch post-Impressionist painter is known both for his unique style and tortured psyche.

The exhibition at L'Atelier des Lumières in Paris places visitors inside Van Gogh's world with giant, detailed renderings of his greatest works. While we can't enter Van Gogh's mind, this exhibit allows people to come close by stepping into his most famous works of art.

Projections of Van Gogh's works across the surfaces of the gallery are accompanied by commentary about the artist's dynamic portfolio and specially selected music. The exhibit helps visitors explore some of the more than 2,000 pictures Van Gogh painted during the last 10 years of his life.

Rather than looking at Van Gogh's paintings within a frame, visitors can take in massive, detailed renderings of the artist's masterpieces. Through Van Gogh's art, patrons can get a glimpse into his personal life. Van Gogh's "Portrait of Dr. Gachet" is one of his most renowned portraits aside from those of himself. Beyond acting as Van Gogh's muse, Dr. Paul Gachet was also the artistic genius' caretaker. Theo Van Gogh placed his brother in Gachet's care shortly after Vincent left the mental asylum where he'd painted "The Starry Night."

Although less famous than some of Van Gogh's other works, his portraits of others provide insight into his artistic inspiration. In 1884, he painted the "Head of a Young Peasant with Pipe" as well as multiple other portraits of peasants.

Van Gogh's self-portraits, however, are some of his most recognisable works. 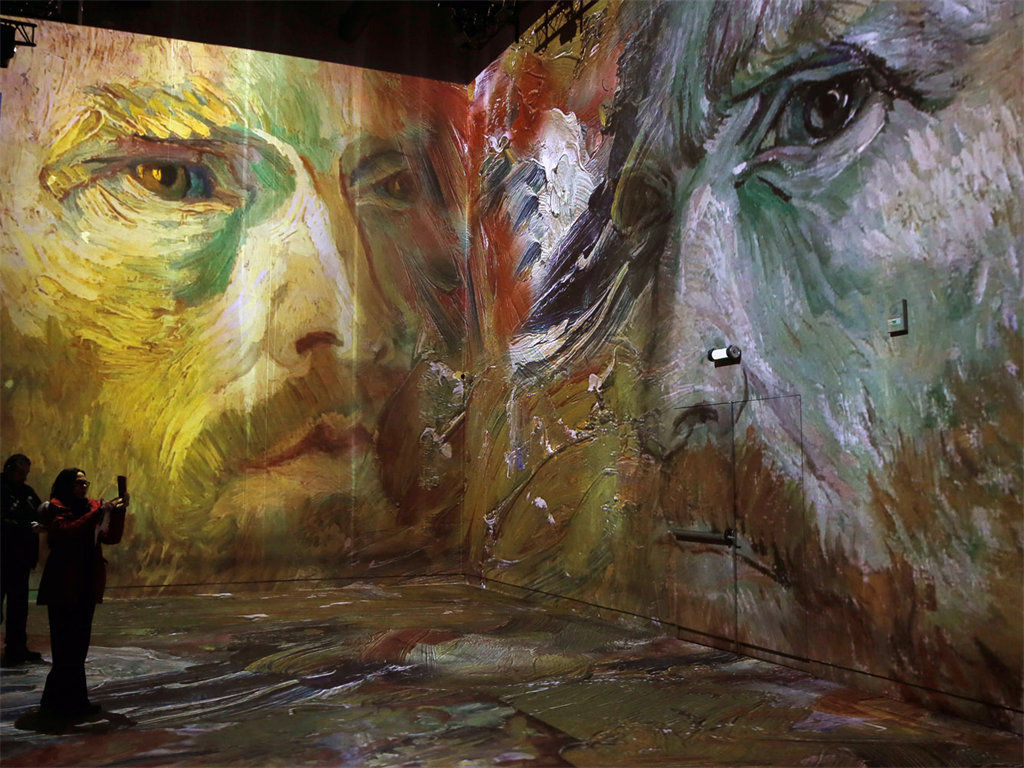 Van Gogh was not a conventionally successful artist while he was alive and spent much of his life relying on the charity of others to get by. For that reason, Van Gogh did not have the money to pay for portrait models, nor was he often commissioned to paint portraits professionally, so he tended to used himself as a muse.

Some of his early works are also featured in the exhibit. Of course, "The Starry Night" is on prominent display. Van Gogh painted "The Starry Night," one of his most famous paintings, while living at the asylum of Saint-Paul-de-Mausole in Saint Rémy, France, in 1889. Van Gogh's "Sunflowers" series is also high on the list of the artist's most well-known works. During his time in Arles, a city in southern France, in 1888 and 1889, Van Gogh painted five large canvases of sunflowers in a vase using three shades of yellow, according to the Van Gogh Museum.

Van Gogh's "Irises" casts hues of purple and blue across the space. He painted many other flowers as well. Van Gogh painted "Oleanders," the portrait on the right, in 1888.

Van Gogh may not have been appreciated during his lifetime, but his art is certainly recognised in grand fashion today.