Vaccine acceptance is growing in South Africa, with the latest Covid-19 study revealing that 76% of the population are willing to be vaccinated if doses are immediately available. It's the painfully slow pace of weekend vaccinations – not hesitancy – which is proving to be the rollout's biggest hurdle.

Vaccine hesitancy is lessening in line with the progress of South Africa's rollout, according to the latest findings of the National Income Dynamics Study Coronavirus Rapid Mobile (NIDS-CRAM) survey.

The highest hesitancy rates – identified as those who would refuse to be vaccinated against Covid-19 if presented with a dose – were recorded prior to the rollout's start. A report published by the University of Johannesburg and Human Sciences Research Council (HSRC) in January found that 67% of respondents would definitely or probably take a vaccine.

NIDS-CRAM Wave 4 data, gathered through more than 5,600 interviews among nationally representative households between February and March, showed that 71% of the population were open to being vaccinated against Covid-19. The latest Wave 5 report, conducted between April and May when Phase 2 of the rollout targeting senior citizens was taking shape, notes that acceptance rates had climbed to 76%.

The study revealed other critical shifts in perceptions around Covid-19 vaccines, noting that 47% of respondents who were hesitant in the Wave 4 survey had changed their minds – indicating their willingness to be vaccinated – by May.

Almost 80% of respondents aged 60 and above said they were willing to be vaccinated, with the lowest hesitancy rates of all age groups surveyed. Importantly, the study notes that stated willingness does not always correlate to vaccine uptake, as demonstrated by the fact that only half of the country's senior population had registered for their jabs by the end of June.

The rate of reluctance to be vaccinated is highest among South Africa's young population – particularly those aged between 18 and 25 – with rushed testing and side-effects cited as the main reasons for hesitancy.

And while initial concerns around the uptake of vaccines in South Africa focused on combatting hesitancy and securing adequate supply, the greatest current stumbling block is the low vaccination rates over weekends.

South Africa's vaccine supply at the end of June, after overcoming regulatory issues impacting Johnson & Johnson (J&J) jabs, was more than double the amount of doses administered since the rollout's start in February.

The daily average number of doses administered over the past week – counting only week days between Monday and Friday – amounts to 150,000, breaching the 3.8-million mark. This is the highest rate recorded since the rollout began but is still half of the short-term target set by President Cyril Ramaphosa.

Less than 22,000 vaccines were administered over the past weekend, representing just 7% of the daily average recorded during the work week.

"The lack of weekend vaccinations is the binding constraint to the South African vaccination programme," explained the latest NIDS-CRAM report. 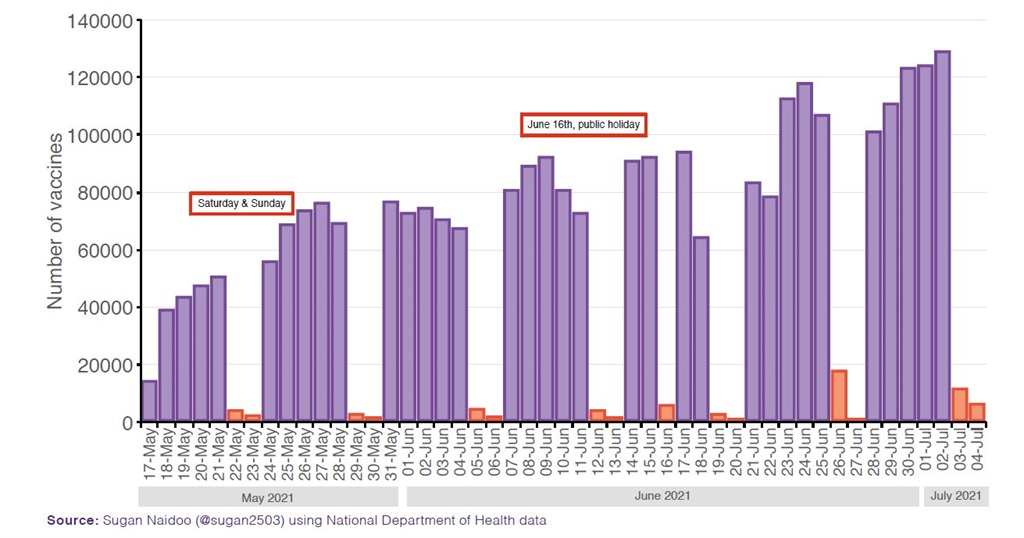 This lull has drawn fierce criticism, with government explaining that provincial budget constraints – which prohibit healthcare workers from being paid overtime – are responsible for the sites being closed outside of regular working hours.

The NIDS-CRAM report estimates that 1.3 million more vaccine doses – roughly 43% of the total – could've been administered in May and June if vaccinations at all sites were available on weekends.

"The department of health's target for the end of June 2021 was to administer 5 million doses, of which it managed to achieve only 3 million (60% of the target)," noted the NIDS-CRAM report.

"Had weekend vaccinations been planned for, the estimate is that approximately 4.3 million or 86% of the target would have been administered by end June 2021 (to ensure 40-million South Africans are vaccinated by the end of February 2022)."