By the end of this year, the V&A Waterfront doesn't want any plastic straws on its premises. It also wants to cut down on single-use plastic bags.

Of the V&A’s 84 food and beverage tenants 46 still use plastic straws. Some 11 use biodegradable straws; 17 use paper; 4 use pasta straws; one uses straws made of corn starch; and five don’t use straws.

“The V&A is a leading tourist destination and people look to us to set an example,” said Donald Kau, V&A spokesperson.

As part of the initiative there is new signage in parking lots reminding shoppers to bring their own bags as well as several pop-up stores at the entrances where customers can purchase bags made from discarded plastic bottles, run in partnership with Pick n Pay and Woolworths.

“Often customers get to the till point and realise they have left their bag in their car or at home,” says Andre Nel, Pick n Pay’s General Manager for Sustainability. “We want to continue working with our customers to shift this behaviour and believe putting reusable bags top of mind can help encourage the adoption of the reuse habit.” Read: We tested the new R5 bags from Checkers, Pick n Pay and Woolworths – and found that there’s really no excuse to use plastic anymore

The V&A also said it would be introducing an ‘intensified separation at source’ campaign which will be rolled out within the next six months.  This is spearheaded by Petro Myburgh, V&A operations manager, who said the property produces an astounding 6,700 tons of waste per annum.

From a new R17 million on-site waste treatment facility, which started operating in January 2018, they say they have been able to divert 38% of the waste on the property from landfill – 2.2 tons of it consisting of discarded coffee cups a month alone.

“The city is running out if landfill space and we took the decision to manage our own waste treatment,” said Myburgh. “If we can encourage separation at the source and start with separating organic waste from other waste – that’s half the battle won.” 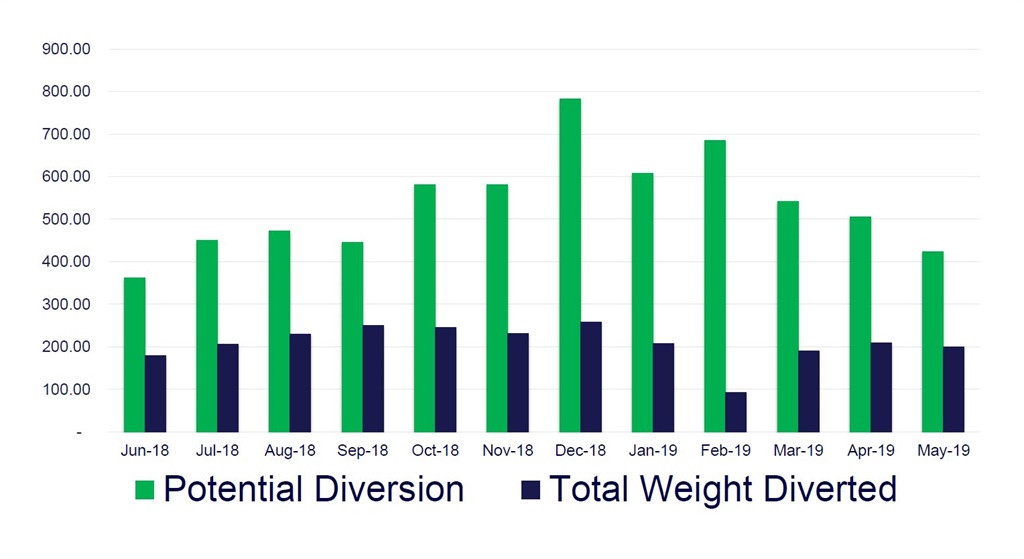 V&A Waterfront estimated potential vs actual weight diversion from landfill. The V&A say they want to improve on this over the next few years.

During a peak season month, like December, Myburgh said there is a potential 800 tons of waste that they believe they can divert a month.