The US military had to apologise for an offensive coronavirus post 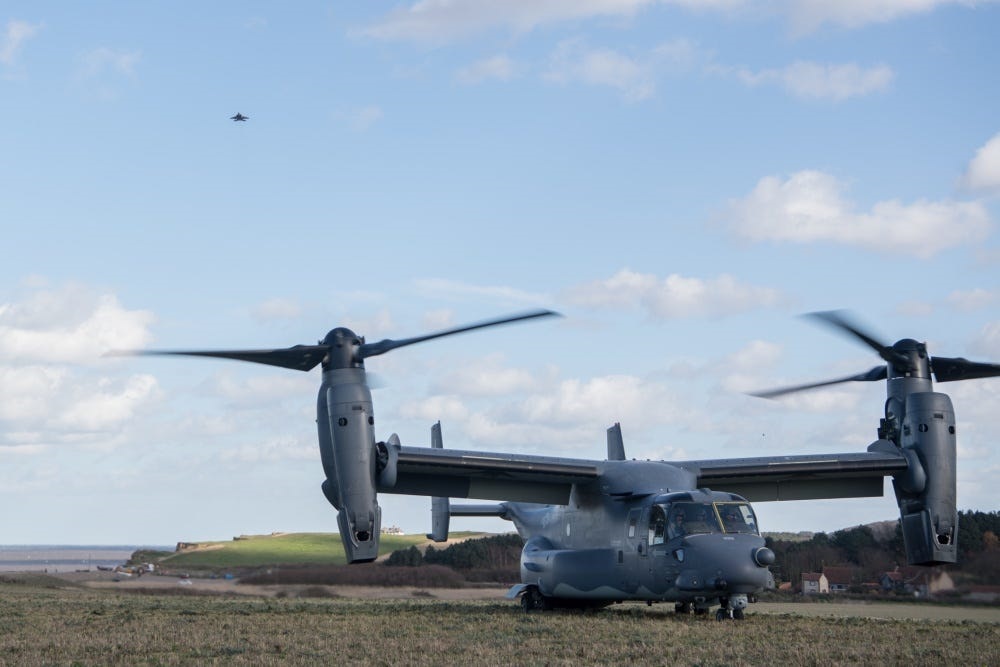 Every day, scores of US military commands reach millions with posts aimed to inform and inspire: videos of valor, motivational photos, and, yes, puppy pics.

The military has codified the rules for managing these official accounts. But sometimes these social-media pros - even those at the four-star command responsible for the US's nuclear weapons - fail miserably.

Here's a rundown of some of the military's most embarrassing, troubling, and dumb social-media mistakes in recent years.

The tweet, which featured a picture of a CV-22 Osprey tilt-rotor aircraft, read: "Know what else has CV that isn't #COVID19? #CV22uesday!"

The tweet was deemed to be in poor taste given the devastation the virus has caused. An AFSOC spokesman told Military Times that "we recognise it was in poor taste and have taken it down and apologise to anyone offended." He added that the command will "review how this happened and act accordingly." The Army put out a post on March 21 as part of an Army COVID-19 question and answer series that was considered racist and offensive. "Why did the man eat a bat?" the post asked. The answer, which was accompanied by a picture of a man shrugging, was "it wasn't because he was thirsty."

The Instagram post appears to have been referencing early reports that the coronavirus outbreak originated from the consumption of bats in China, which have fueled insensitive jokes.

"This is simply unacceptable. We do not know how #COVID19 first infected humans but racism has no place in our Armed Forces," Illinois Sen. Tammy Duckworth wrote on Twitter in response. On March 6, 2020 the Defense Department flubbed a #KnowYourMil moment, when it tweeted out an image of Utah National Guard M109 Paladins but wrote: "Ready to roll out the big guns! The tanks of the @UTNationalGuard are lined up and ready to participated in #AfricaLion."

Paladins are tracked and have large cannons, but they are not tanks. The Utah National Guard responded to the tweet, writing, "Guys ... the M109 Paladin is a 155mm turreted self-propelled howitzer." In a move that drew significant criticism, the official Facebooks pages of the Army 10th Mountain Division, the 18th Airborne Corps, and the Department of Defense all shared the picture of a Nazi responsible for the murder of more than 84 American prisoners of war in Dec. 16, 2019 posts commemorating the 75th anniversary of the Battle of the Bulge, a fierce WWII battle.

I am dumbfounded by the decision to prominently display a Nazi on military social media on the 75th anniversary of the Battle of the Bulge. pic.twitter.com/Do0mB7Guvj

The posts were later deleted. The Army said that it "regrets" that the image was included in the post that was shared on social media. On November 20, 2019, the Department of Defense's official twitter account shared this stunning image of an armored vehicle firing at a training exercise with the tag, #KnowYourMil.

The only problem - they named the wrong armored vehicle.

That's a Stryker armored vehicle firing its 105mm gun, not a Paladin self-propelled howitzer as the DoD tweet identified it. One easy way to tell them apart is that the Paladin is a tracked vehicle like a tank, unlike the eight wheels on a Stryker. On Sept. 20, 2019, the Pentagon's Defense Visual Information Distribution Service (DVIDS) tweeted out a warning to millennials planning to attend the "Storm Area 51" event that day, suggesting it was going to bomb them.

"The last thing #Millennials will see if they attempt the #area51 raid today," the tweet read. The accompanying image was a B-2 Spirit bomber, a highly-capable stealth aircraft built to slip past enemy defenses and devastate targets with nuclear and conventional munitions.

The tweet prompted some backlash online, and the next day, DVIDS deleted the offending tweet and sent out a new one explaining that "last night, a DVIDSHUB employee posted a tweet that in NO WAY supports the stance of the Department of Defense."

'#Ready to drop something much, much bigger' US Strategic Command, which oversees the US's nuclear arsenal, rang in 2019 with a reminder that they're ready, at any time, to start a nuclear war.

Playing off the image of the ball dropping in New York City's Times Square, STRATCOM's official account posted a tweet that included a clip of a B-2 dropping bombs. The command apologised for the message. In May 2018, the internet was debating whether the word heard on a short audio recording was "Yanny" or "Laurel." Then the US Air Force joined the debate, referring to a recent strike on Taliban.

"The Taliban Forces in Farah city #Afghanistan would much rather have heard #Yanny or #Laurel than the deafening #BRRRT they got courtesy of our #A10," the official US Air Force Twitter account said.

The A-10 gunship carries a fearsome 30mm cannon used to destroy buildings, shred ground vehicles, and kill insurgents. It can fire so rapidly - nearly 3,900 rounds a minute - that the sound of each bullet is indistinguishable from the previous one, blending into a thundering "BRRRT."

The US Air Force apologised for the tweet and deleted it, acknowledging it was in "poor taste."

In January 2018, President Donald Trump fired off a flurry a tweets defending himself in response to the headline-grabbing details in Michael Wolff's book, "Fire and Fury."

Trump said he was "like, really smart" and "a very stable genius."

That prompted a tweet from comedian Mindy Kaling from her character in the office, with the caption: "You guys, I'm like really smart now, you don't even know."

By the following day, the US Army had unliked the tweet. In 2016, the US Navy celebrated the 241st year since the date of its creation with a tweet that combined three images into one: a warship, a fighter jet, and a painting of a historic battle.

But the birthday message didn't go over well with one audience on Twitter: Turks.

The flag in that battle scene closely resembles that of Turkey, a NATO member and US ally, as Muira McCammon detailed in Slate.

The Turkish community on Twitter sharply criticised the US Navy, and the Navy deleted it.

Related Links
Video shows a military helicopter dropping coronavirus test kits to the Grand Princess cruise ship
Canadian military stands up for women troops after viral tweet
A major ally's decision to scrap a military deal with the US raises the stakes in competition...
Next on Business Insider
The Magneto rechargeable LED lanterns sold out quickly when load shedding went to Stage 6