The failed Covid-19 response in the US continues to snowball 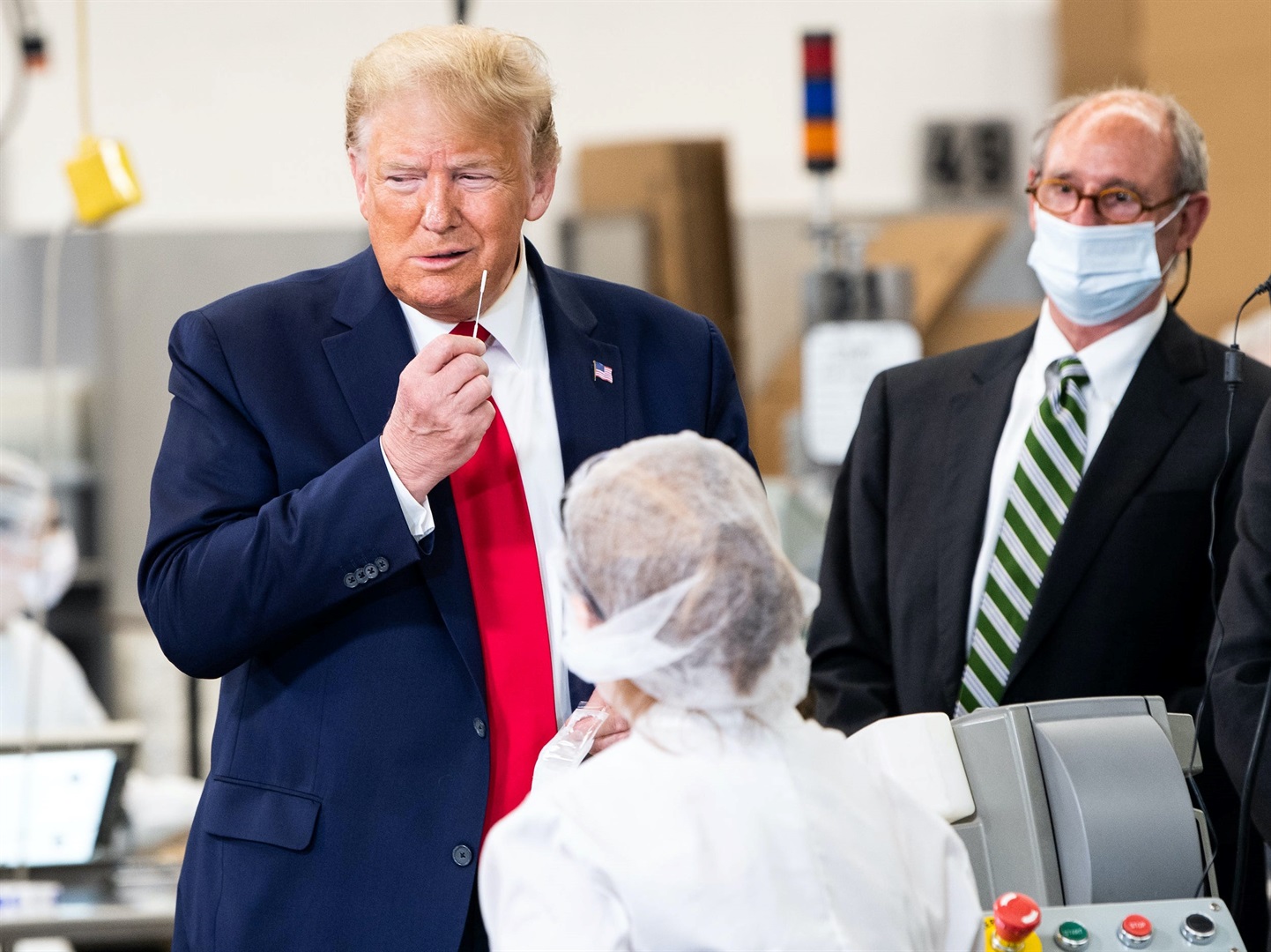 Trump pretends to take a COVID-19 test while holding a swab during his visit of the Puritan Medical Products facility in Guilford, Maine on June 5, 2020.
Nicholas Kamm/AFP via Getty Images

The US response, by contrast, was painfully slow.

More than five months after the nation's first case was reported, the average number of daily new cases is approaching levels seen at the height of the outbreak in April. The US reported more than 32,000 new daily infections on Saturday - its highest number since May 1. By Sunday, the nation's seven-day average of new cases had increased 24% since the week prior.

At least 23 states are seeing increases in daily coronavirus cases. That includes a number of Southern states like Florida, Texas, Alabama, and Arkansas. Florida's seven-day average of new infections grew by nearly 87% from this week to last. The state also reported its highest daily total of coronavirus cases in the pandemic so far on Saturday: more than 4,000. In Alabama, more than quarter of the state's total coronavirus cases have been reported in the last two weeks.

"This is a continuation of the first wave," Dr. Amesh Adalja, a senior scholar at the Johns Hopkins University Center for Health Security, told Business Insider. "Some places that might have been relatively spared early on in the winter and the spring are now facing cases higher than they had before."

While early outbreaks in places like the San Francisco Bay Area, Seattle, and New York City were exacerbated by testing shortages and a lack of disease surveillance, the latest surge in cases may be fueled by states reopening without effective contact tracing.

"The virus is going to exploit any interaction between people, so it doesn't surprise me that there are more cases where people have been interacting more," Adalja said.

In reality, flaws in the US's response are snowballing as cases threaten to spiral out of control yet again.

The US's initial response to the pandemic was hampered by testing delays, restrictive testing criteria, a lack of airport screenings, and a shortage of medical supplies.

State laboratories weren't able to start testing for the coronavirus until late February and early March - more than a month after the US Centers for Disease Control and Prevention developed its coronavirus test. During that time, private labs were hamstrung by FDA regulations that prevented them from developing their own diagnostic tests.

The CDC's strict testing guidelines, implemented in part because of a shortage of available tests, undermined health officials' ability to find, isolate, and trace infected patients. Until March 5, patients could only be tested for the virus if they had been hospitalised, had exposure to a confirmed patient, or had recently traveled to an area with an outbreak.

In March, states also began reporting shortages of medical equipment, including ventilators and face masks. The US Department of Health and Human Services requested $2 billion for additional medical equipment in February, but the White House only agreed to finance $500,000 worth.

To top it off, airport screenings failed to prevent a large swath of infected travelers from entering the country. A May report from the House Oversight and Reform Committee found that the Department of Homeland Security only checked the temperature of 10% of passengers arriving at US airports from travel-restricted countries from January to March.

Together, these factors allowed the outbreak to swell.

Advice from federal agencies has also been steadily plagued by inconsistencies. In January, President Trump insisted the outbreak was "totally under control." The next month, he said the virus would "go away" by April.

The CDC also waffled on its face-mask recommendations. After telling people masks weren't necessary for three months, the agency reversed course on April 3. States then followed a piecemeal approach, with some requiring masks and others not recommending them at all.

"The United States would have benefited from strong federal leadership and guidance,"Adalja said. Instead, he added, there was "a hodgepodge of recommendations from different states that weren't necessarily being guided by any kind of principles, but kind of being guided by expediency and fear."

US testing has ramped up significantly in the last month. As of Tuesday, the US had administered more than 27 million diagnostic tests - more than any other country. (However, the US still trails behind several nations, including Singapore and Russia, in terms of testing per capita.) President Trump has attributed the high case count - more than 2.3 million infections - to this expanded testing capacity.

But public-health experts say the recent surge in cases cannot be explained by increased testing alone.

"The reason that we're seeing a spike in cases here in Houston is because of the decisions that our governor has made to open up the economy fairly aggressively," Dr. Cedric Dark, an emergency physician in Houston, previously told Business Insider. But 18 of the 30 states that started reopening as of May 7 were still seeing daily new cases rise, according to data from the New York Times. Nine of the 30 states hadn't seen the recommended decline in their share of positive tests. Six reopened without meeting either criteria: Utah, Iowa, Nebraska, Kansas, Oklahoma, and Missouri.

"It's important to remember that we never had complete control of this virus," Adalja said. "We got to a point where hospital capacity was in a better place and diagnostic testing was better, but we're still having at least 20,000 cases per day."

Hospitals could get overwhelmed again

Reducing coronavirus cases to zero was never an option because of the flaws in the US's initial response, Adalja said.

"It was really about hospital capacity," he added. "That's why we're worried about places like Arizona and parts of Texas."

The percentage of coronavirus tests coming back positive is now increasing in Arizona, Florida, Georgia, South Carolina, and Texas - a sign that their hospitals could become overburdened.

"When you see percent positivity rising, that usually means that not every case is being captured by this system," Adalja said. "It really underscores the need for states to get robust case contact tracing teams in place, because that's the way you keep those chains of transmission from spilling into your hospital."

Florida's percentage of positive tests jumped from 6% on June 14 to 11% on June 21, according to Reuters.

Arizona's percentage of positive tests rose from 8% on May 24 to 20% on June 21. On Saturday, the Arizona Department of Health Services reported that 83% of the state's inpatient beds were full, along with 85% of beds in its intensive-care unit. Arizona's weekly hospitalisations rose by about 29% this week compared to last.

In a study that's still awaiting peer review, a group of Italian, Spanish, and US researchers estimated what it would take to resume economic activities in Boston without overburdening the city's healthcare system. The answer: identify 50% of symptomatic infections and trace 40% of those patients' contacts.

The US's contact tracing workforce has tripled in the last six weeks, from around 11,000 workers on May 7 to more than 37,000 June 18. But most states reopened without widespread contact-tracing programs in place yet.

But a recent NPR survey of state health departments found that 37 states did not meet that criteria.

"I just don't see any evidence that they're trying to do it in a smart way," Halloran said. "They just decided, 'let's open up.'"