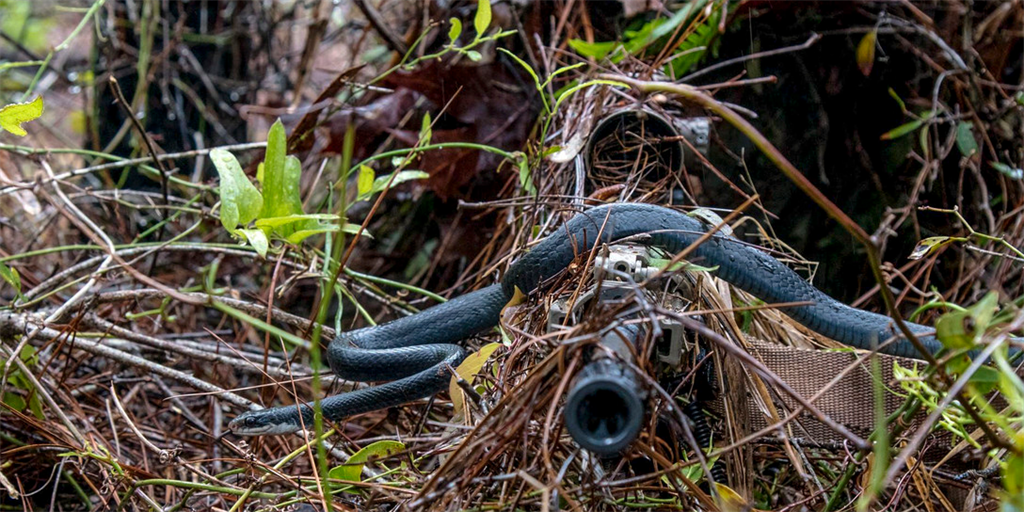 A snake slithers across the rifle barrel of junior Army National Guard sniper Pfc. William Snyder. (Army photo by Staff Sgt. William Frye)
The US Army is working on new camouflage systems to protect soldiers waging war on future battlefields from one of the greatest threats to their survival, a top Army general told lawmakers.

The general said that future battlefields are likely to be "highly lethal" environments where "units will be cut off and separated," making soldier lethality and survivability key.

"We know that adversary [target] acquisition systems are very, very capable in that, if you can see a target, with precision munitions ... you can hit a target," he said. "So camouflage systems that break up electronic signatures and break up heat signatures are critical."

In an era of renewed great-power competition, the Army is increasingly looking closely at protecting soldiers against advanced threats from countries such as China and Russia. Among the greatest threats soldiers face is advanced sensing technology, a top US Army sniper previously told Business Insider.

"Defeating a thermal signature is probably the hardest thing that a sniper has to do, especially with the emerging technology by our near-peer enemies," Staff Sgt. David Smith, a sniper instructor at Fort Benning, said, adding that while it is easy for snipers to hide in the visible spectrum, it is becoming increasingly difficult for them to disappear as US rivals "creep into the thermal arena."

A US Army soldier may be concealed and well hidden from the watchful eyes of the enemy but light up like a Christmas tree on a high-end thermal-imaging device, which can detect the temperature difference between a human body and the environment they're hiding in.

Milley didn't identify which systems the Army is working on, but the projects would likely include systems such as the new Ultra-Light Camouflage Netting System (ULCANS) and possibly the Improved Ghillie System (IGS) being developed for snipers.

ULCANS, developed by Fibrotex, is a kind of advanced camouflage designed to conceal troops from night vision, thermal imaging, radar, and more. The Army awarded Fibrotex a multimillion-dollar contract last year to supply US troops with this technology.

The IGS is in testing and is expected to eventually replace the older Flame Resistant Ghillie System (FRGS) that Army sharpshooters are wearing now. It is unclear if this new system is designed to counter thermal sensors, but it is being put through full-spectrum testing.

It's not enough to just hide, soldiers are having to change the way they conceal themselves to disappear like they have never done before as adversaries step up their game.

Related Links
Take a look: British scientists dressed up horses to find out why zebras have stripes
US Army snipers played hide-and-seek to test new camouflaged ghillie suits for next-level combat
The US army has new camouflage that makes soldiers – and tanks – all but invisible, even to radar
Next on Business Insider
A man was jailed in Spain for defrauding his employer by stealing 7,000 hugely expensive hams