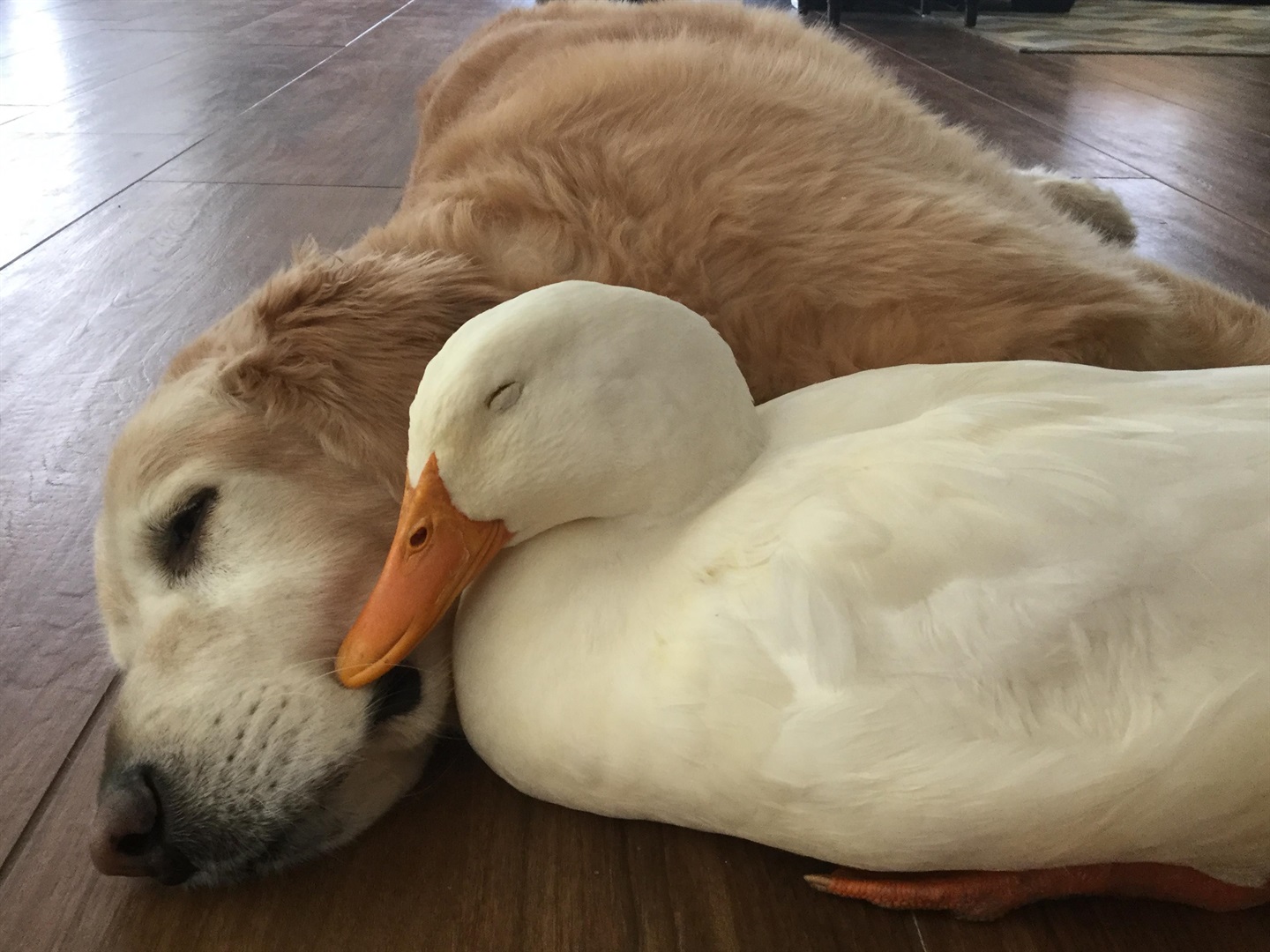 This dog and duck make quite the duo.
Pam Ishiguro/Barcroft Images/Barcroft Media via Getty Images

Many animals and pets can form genuine, close relationships with one another. Some of these animals offer each other emotional comfort, while others offer physical benefits, such as picking bugs off each other's fur.

From a great Dane and a baby deer to a dog and a duck, here are 11 photos of unlikely animal companions that prove friendship can be found everywhere.

A group of otters bonded with a family of orangutans at a zoo in Belgium. A group of Asian small-clawed otters that live in a river located in the orangutan territory at the Belgium zoo Pairi Daiza have taken a liking to two orangutans: Uijan, a 24-year-old male, and Sari, a 15-year-old female.

Uijan and Sari have lived in the habitat with their 3-year-old son Berani since 2017.

Pairi Daiza spokesman Mathieu Goedefroy told Insider that the orangutans and otters live together as a form of enrichment and entertainment.

"It makes life more fun and interesting for both animal species," Goedefroy said. "That's why we chose to let an otter family live in the river that runs through the orangutan territory."

At a Bangladesh zoo, a sheep and a rhinoceros formed an unlikely companionship. The female rhinoceros, named Kanchi, became depressed when her male partner died in 2013, according to the Dhaka Tribune.

Kanchi stopped eating and grew quiet following the loss, so the zoo workers decided to introduce her to a sheep for a companion - and it worked. The sheep and rhino lived together for five years, according to the Bangladesh newspaper.

"The sheep could have had a life of her own, but remained steadfastly dedicated to the rhino," reported the Dhaka Tribune.

In Belgium, a baby goat found an unlikely companion in two Saint Bernard dogs after its mother died. Two Saint Bernard dogs provided companionship to a baby goat in Belgium, according to The Dodo in 2016.

The dogs' owner, Isolde Mattart, adopted the goat, Hans, after his mother died and his original owners were unable to care for him. Mattart's Saint Bernard dogs, Julie and Basiel, formed a special friendship with the goat.

The goat, Hans, sunbathed with the dogs and often took naps with the two canines.

A golden retriever named Barclay snuggles up with Rudy the duck. Owner Pam Ishiguro uploaded a video of her two ducks, Rudy and Pippi, trying to rouse golden retriever Barclay, who was napping in the Southern California home, according to a video from ABC7.

Birds stand in a line on the head of a buffalo in Kenya. Here, an African buffalo carries a group of birds in Kenya, Africa. Birds and buffalo often flock to buffalo, as they feed on fleas or lice that may be on the buffalo's back. This cleans the buffalo and gives the birds an easy meal, as explained by the Denver Zoo.

The birds, called oxpeckers, have what's called a mutualistic relationship with other mammals, like rhinos and zebras, according to the New England Complex Systems Institute, a research and educational institution with affiliates from MIT, Harvard, and Brandeis University. Oxpeckers get food, and in return, the mammals are protected from pests. When one of the Brooklyn Cat Cafe's kittens was diagnosed with feline leukemia, it had to be isolated from the other cats so they wouldn't contract the disease, according to National Geographic. The shelter then introduced a rat to the isolated cat, because rats are unable to contract the feline leukemia virus, National Geographic reported - and shelter owners ultimately found success with the rat-cat relationship.

A German shepherd can make a great companion for wild animals, like baby tigers. 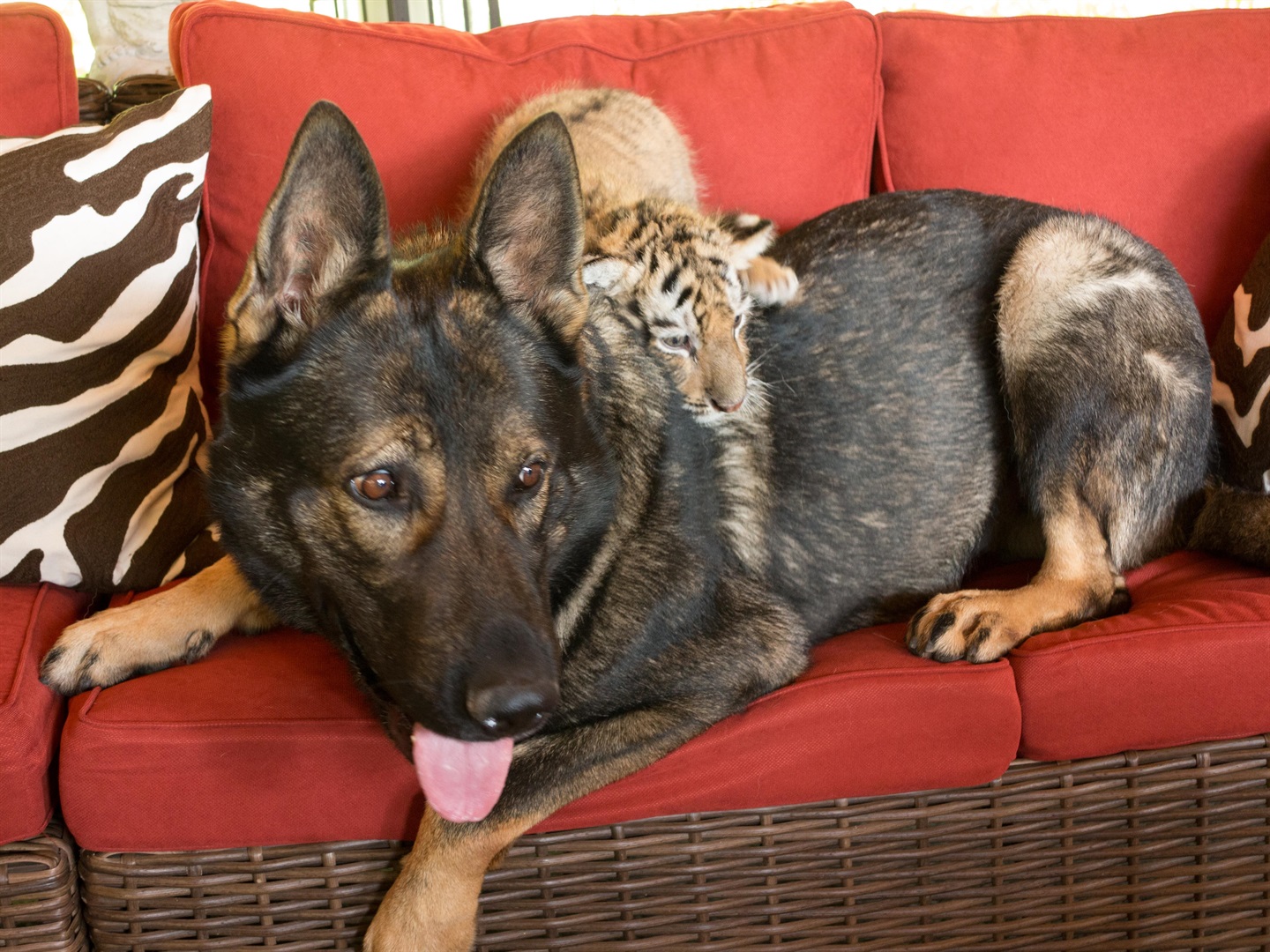 A Miami animal shelter called the Zoological Wildlife Foundation houses around 180 animals, including leopards, lions, otters, and a camel. The shelter's owners, Maria and Mario Tabraue, often bring their German shepherd, Igor, to the property and let the other animals interact with the dog.

Dogs and leopards have similar dispositions and social structures, which can make for great friendships. According to "Animal Odd Couples," an episode of "NATURE" on PBS, leopards and dogs "are so close, overall, in their disposition, the way that they are socially structured, [and their] length of life that they can coexist in a space, even though they're at different places on the line of carnivore." The golden retriever mother milked not only her puppies, but also a number of wild animals who were abandoned by their mothers, including a white tiger cub, spotted hyenas, Siberian tigers, and an African lion, according to a BBC story from 2018.

Dogs and deer are another example of social species that have the ability to form lasting friendships. The relationship between dogs and deer was examined in "Animal Odd Couples," an episode of "NATURE" on PBS.

In the episode, the owner of a Great Dane described the uniqueness of the dog's relationship with an abandoned baby fawn, Pippin, saying: "When they greet each other, I've never seen anything like it. It's not a deer greeting a deer. It's not a dog greeting a dog. It's definitely something that they have between the two of them."

The friendship between this dog and hedgehog may be linked to the fact that both species are social animals and that they provide tactile sensations for each other. Animal behaviorist John Wright explained to NBC that young mammals may be open to animal friendships as long as the species are social and able to give and receive warm, soft sensations - but lasting animal friendships aren't guaranteed to happen with every furry duo.

Wright explained in the story that in order for the relationship to last, animals have to not only be comfortable with one another, but they also need to have space and opportunities to live in a way that fulfills their biological needs.