The universe is expanding faster than scientists thought, a study confirms — a 'crisis in cosmology' that could require a 'new physics' The universe is expanding much faster than scientists predicted, and nobody knows why.

A team of researchers have confirmed this dilemma with data gathered using a new telescope technology that relies on shape-shifting mirrors. According to their study, which was published last month in the Monthly Notices of the Royal Astronomical Society, precise measurements of the rate at which the universe is expanding don't match the standard model that scientists have been using for decades.

"Therein lies the crisis in cosmology," Chris Fassnacht, an astrophysicist and co-author of the study, said in a press release.

"This mismatch has been growing and has now reached a point that is really impossible to dismiss as a fluke. This disparity could not plausibly occur just by chance," Adam Riess, the Nobel Prize-winning scientist behind a study that came out in April, said in a press release at the time.

He added that these findings "may be the most exciting development in cosmology in decades."

The mystery of the Hubble Constant

The universe is always getting bigger, stretching galaxies farther apart. For decades, scientists have attempted to measure how fast the universe is growing - a number called the Hubble Constant.

Researchers piece together the universe's history by studying the glow of radiation left over from the Big Bang about 13.8 billion years ago, called the cosmic microwave background (CMB).

When scientists study the CMB, they're looking both far into the distance and far into the past, since light travels at a constant speed. When we look at the sun, for example, what we see on Earth is the sun as it appeared 8 minutes ago, since it's about 8 light-minutes away. So when scientists look at objects far enough in the distance, they see them as they were at the beginning of the universe.

Based on those observations, scientists have found that after the Big Bang, the universe at first expanded very quickly. Then the expansion slowed as the gravity of dark matter ?- a mysterious, invisible force that makes up about 85% of all matter in the universe - pulled back.

An artist’s depiction of the standard model of cosmology.
BICEP2 COLLABORATION/CERN/NASA

But recently, they've run into a problem.

Measurements of the contemporary universe show it's expanding much faster than the standard model predicts. Riess' April study found that the universe is expanding 9% faster than predicted by calculations based on the CMB.

"This is not just two experiments disagreeing," he said at the time. "We are measuring something fundamentally different. One is a measurement of how fast the universe is expanding today, as we see it. The other is a prediction based on the physics of the early universe and on measurements of how fast it ought to be expanding. If these values don't agree, there becomes a very strong likelihood that we're missing something." 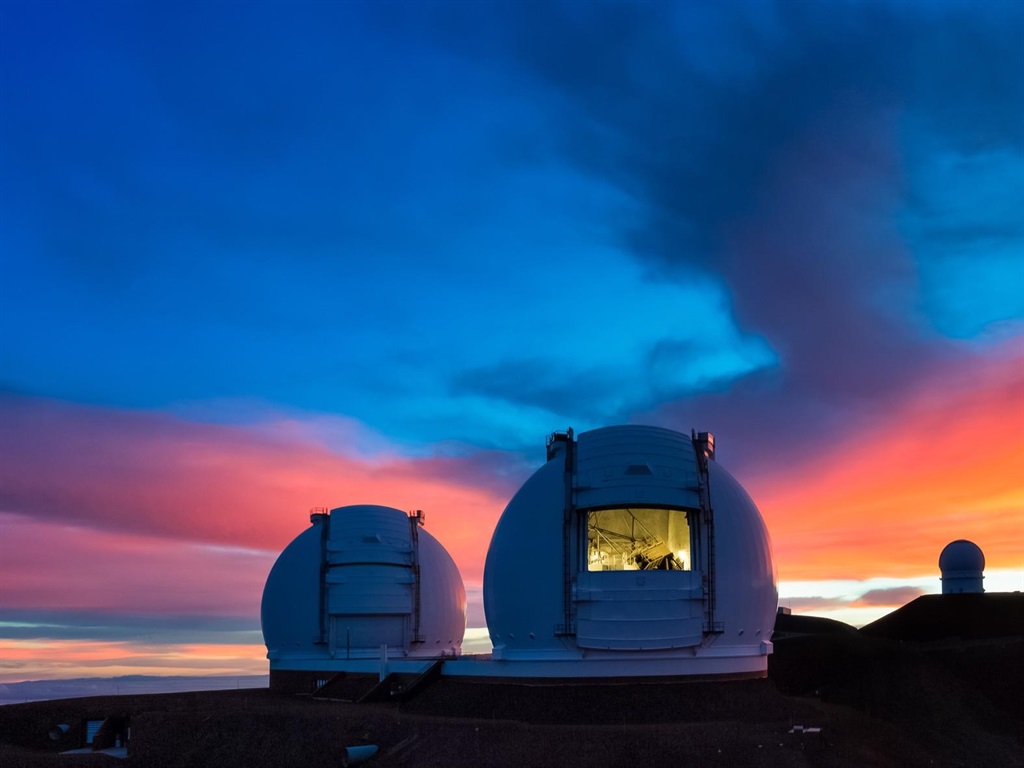 The Keck I and Keck II telescopes on Mauna Kea in Hawaii.
W.M. Keck Observatory

For the new study, the researchers used a cutting-edge mirror system at the Keck Observatory telescope in Hawaii. The device uses flexible mirrors that can correct for distortions caused by Earth's atmosphere and return extra-sharp images of objects in the sky.

They studied the quasars using a process called gravitational lensing, which measures the way light gets bent as it travels around massive objects on its way toward Earth. A massive object (like a giant galaxy, say) bends light in a variety of directions, which allows scientists to see different, distorted versions of the same quasar from slightly different times in its past. They can then compare those various images to calculate how long a quasar's light takes to reach us and gather information about how much the universe expanded during that travel time.

Like the previous studies, the new results showed that the universe is expanding more rapidly than the standard model predicts. The researchers compared their results to data from the Hubble Space Telescope, and the findings were consistent.

"A difference in the Hubble constant between early and late-time universe means that there is something missing in our current standard model," astrophysicist Sherry Suyu said in a press release about the recent study. "For example, it could be exotic dark energy, or a new relativistic particle, or some other new physics yet to be discovered."

Scientists don't yet know what that missing piece could be. Some think the culprit could be dark energy, the term for the mysterious, unseen force that makes up about 68% of the universe. This energy could have sped up expansion as it pushed outward and overwhelmed the gravity of dark matter.

Fassnacht said he hopes scientists will continue to employ this new telescope technology to gather more precise data as they search for missing pieces in their understanding of the universe.

"Perhaps this will lead us to a more complete cosmological model of the universe," he said.