20 stunning photos of underwater caves around the world An underwater cave in Mexico, left, and an ice cave in Switzerland.
Donald Miralle: Getty Images for Lumix

Underwater caves can be found around the world, but appear and develop differently according to their environment. Caves in warmer waters can be home to coral reefs, while ice caves have less abundant life.

Photographers and divers have made it possible for us to get a glimpse at these mysterious underwater worlds. Images taken across the world, from Mexico's cenotes to Russia's underwater mineral caves, reveal beauty at great depths.

Take a look at photos of underwater caves around the world.

Mexico has thousands of underwater caves in its cenotes, like this one in Tulum. Mexico's Yucatán Peninsula holds tens of thousands of cenotes, which are created when the ceiling of a cave collapses.

"An important water source, they were also a mystical threshold between this world and the underworld, marked with sacrifices of pottery, jewelry, and occasionally human beings. Today, many double as swimming spots popular with locals - and often unknown to tourists," according to National Geographic.

A diver swims through a sunbeam in the Cenote Taj Mahal in Quintana Roo, Mexico. Named Taj Mahal for its beauty, it has multiple openings that allow sun to reach its waters.

The Gran Cenote cave in Mexico is part of the longest underwater cave system in the world. The world's longest cave was discovered in Mexico's Yucatan Peninsula in 2018. The new discovery connected two previously known flooded caves into one 215-mile-long (346 km-long) stretch, according to National Geographic.

A diver explores a spooky underwater cave in the Sac Be Ha Cenote in Quintana Roo, Mexico. In 2018, Robbie Schmittner, pictured, helped forge the underwater link between the two cave systems that created the longest cave diving complex in the world.

Vibrant reefs can grow on the walls of underwater caves in tropical waters, like this one in the Caribbean Sea off the island of Cozumel, Mexico. The reef is full of gorgonias, a type of soft coral, and sea sponges. The seven mouths in the name refer to seven openings that lead to the surface. The rock formations above are stalactites, formed over hundreds of thousands of years.

Mangrove roots hang from the ceiling of a cave in Casa Cenote near Tulum, Mexico. Casa Cenote is known for its series of underwater caves and incredibly clear water, allowing snorkelers and divers to easily see its beauty.

A scuba diver exploring an underwater cave in Laguna Pepe, Punta Cana, in the Dominican Republic. The Dominican Republic is famous for its underwater caves, which can be viewed by snorkelers or divers. 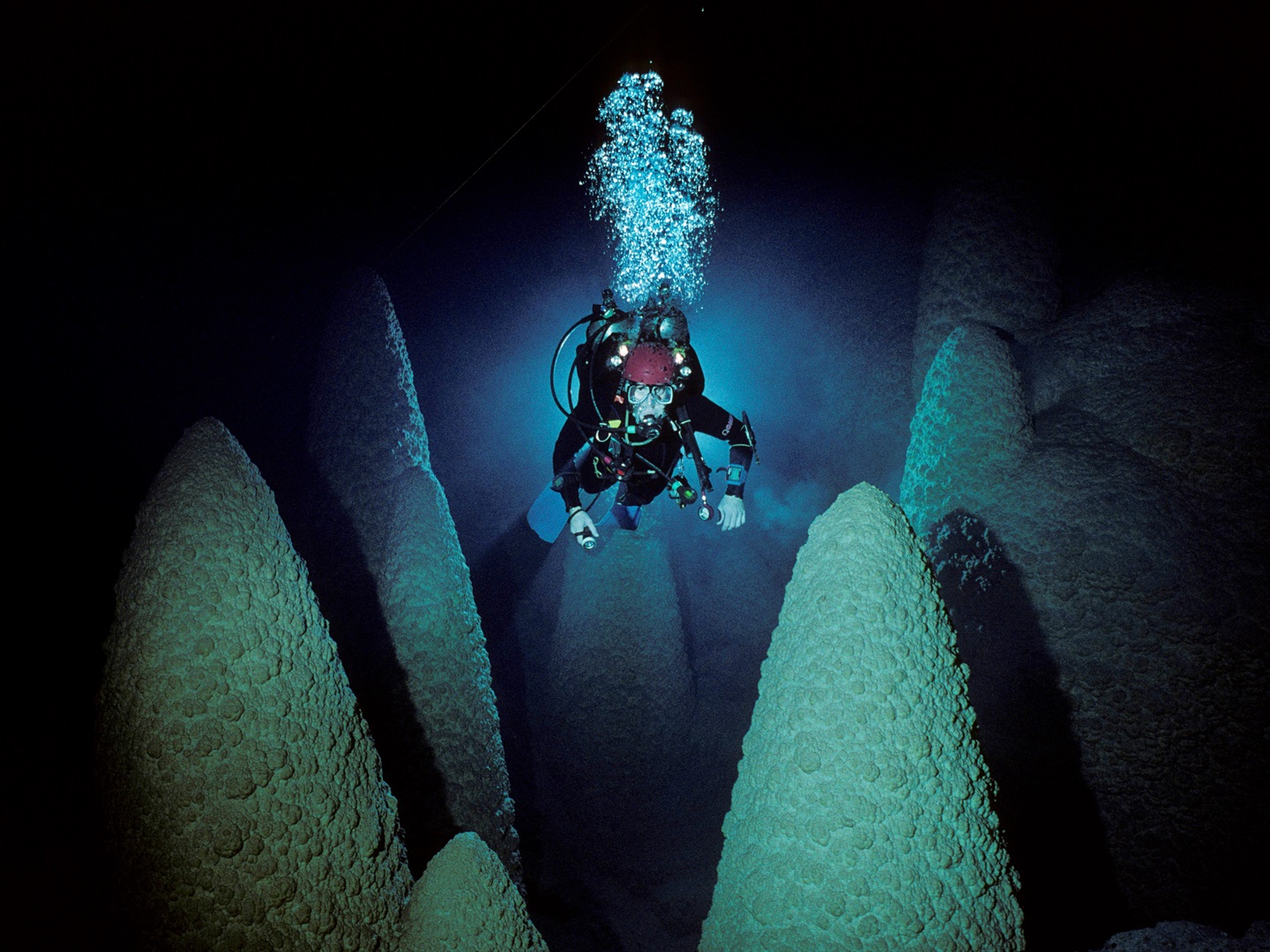 Mato Grosso do Sul is one of the main ecotourism and adventure tourism destinations in Brazil.

Another location for tropical underwater caves is Fiji. This scuba diver explored this one in Fiji's Namena Marine Reserve. According to its website, the Namena Marine Reserve was established in 1997 and is approximately 70 square kilometers. It surrounds the tiny island of Namenalala, and stretches between the two main Fijian islands of Viti Levu and Vanua Levu.

Squirrelfish are residents of underwater caves at the Namena Marine Reserve in Fiji. According to Britannica, Squirrelfish, also called soldierfish, refer to any of about 70 species of large-eyed, colourful, tropical reef fish.

A shoal of neon fusilier fish swim by in a cave in at the Namena Marine Reserve. The reserve is home to more than 1,000 species of invertebrates, 400 known corals, 445 documented marine plants, and over 1,100 fish species.

Europe's waters are also home to submarine caves. This scuba diver enters an underwater cave in the Mediterranean Sea, off the coast of Marseille, France. A scuba diver swims through an ice cave in Lake Sassolo in Sambuco Valley, Ticino, Switzerland. Though Lake Sassolo is close to the Italian border, its proximity to the Alps keeps its waters cool, allowing such magical ice caves to form.

This photo of a cave near the cliff of Cap Canaille in Cassis, southern France, shows the cave from above and below the water's surface. According to the Michelin Travel Guide, Cap Canaille is named for its waters. "Canaille" comes from the Latin Canalis mons, "the mountain of the waters," which refers to the aqueducts built by the Romans to channel its fresh water.

An underwater cave with "fairy chimneys" is seen in Hatay, Turkey. According to Smithsonian, "fairy chimneys" were formed millions of years ago by volcanic ash. When the ash hardened, it became tough, porous rock. The Orda Cave is the longest underwater cave in Russia, and the second longest in Eurasia.

The divers took the stunning photos of the Orda Cave to bring light to the importance of its preservation. The divers applied for the cave to become a UNESCO World Heritage Site in 2008, but the site is yet to be confirmed on their list.

The Orda Cave is the world's only underwater gypsum excursion cave. Gypsum is a mineral that keeps the water very clear. The cave is also a member of ISCA (Association of Excursion Caves of the World). The rocks in the Dinas caves are almost 100% silica, which made them a target for miners from the 18th to the 20th century.