As heatwave temperatures climb to record levels - the hottest day of the year so far, Londoners sunbathe on the grass beneath St. Paul's Cathedral in the City of London (the capital's financial district aka the Square Mile), on 25th July 2019, in London, England.
Richard Baker / In Pictures via Getty Images

The United Kingdom just recorded its hottest temperature on record as a blistering heatwave moved through Europe last week.

The office said the weather measurement was taken at a climate observation site, which reports the temperature every 24 hours, though other observation sites report monthly, which could result in even higher values being recorded. Mark McCarthy, science manager of the Met Office National Climate Information Center, said in the report that heatwaves are likely to become more intense due to the effects of climate change.

"Historically UK summer heatwaves would typically tend to peak in the low 30s Celsius with extreme events reaching the mid-30s," he said in a statement released by the Met Office.

"Climate change has increased the likelihood and severity of heatwave episodes across Europe, which will have also increased the risks of a 40 degrees Celsius temperature event in the UK," he continued. 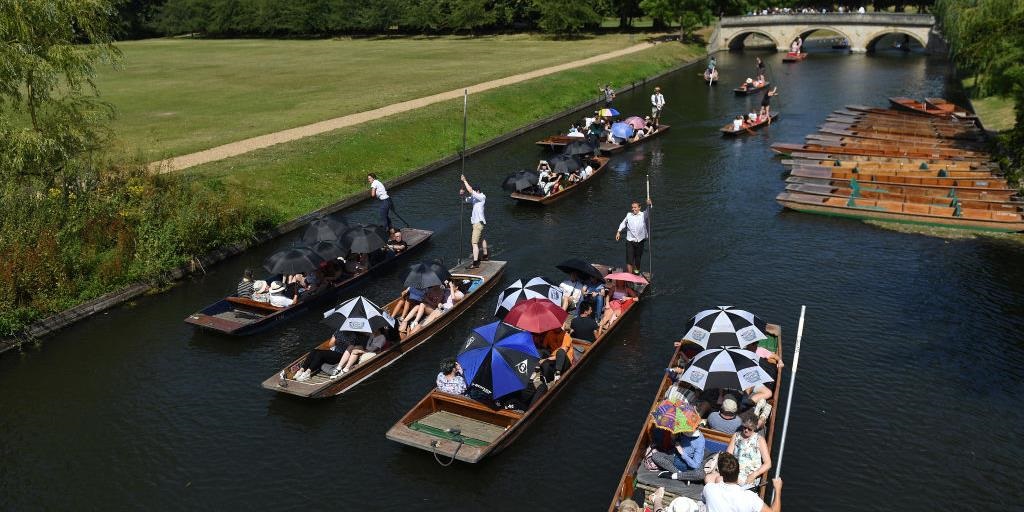 People use umbrellas to shield from the sun as they punt along on the River Cam in Cambridge, as the UK could encounter the hottest July day on record later this afternoon.
Joe Giddens/PA Images via Getty Images

The office said that hot air originating from North Africa, which has seen a significant rise in its temperatures compared to the global average, has contributed to high heat in the region.

"Temperatures in parts of North Africa, for example, have risen by around 2 degrees Celsius," Peter Scott, Scientific Strategic Head at the Met Office, said in the statement. "This can have a marked effect on UK weather because when the weather patterns, like we saw last week, bring air from this region to our shores it can bring a stronger signal of climate change with it too, boosting temperatures."

Across the country, people found creative ways to cool down.

People in Cambridge were seen swimming in the River Cam last week, following a heat warning from the Met Office in the afternoon. A man jumps from a traditional punt into the River Cam on July 25, 2019 in Cambridge, United Kingdom. The Met Office issued a weather warning from 3pm this afternoon.
Leon Neal/Getty Images

In London, residents sun bathed on the grass and in the fountains beneath St. Paul's Cathedral.

The UK's record-breaking heat comes as a blistering heatwave swept throughout Europe.

According to AccuWeather, Belgium recorded its highest temperature ever of 40.7 Celsius (105.3 Fahrenheit) on the same day, beating the previous record of 39.9 Celsius set on Wednesday.

Several reports released this month confirmed that June was the hottest month on record, with record-breaking heat recorded throughout the month all around the world, including in Eastern Europe, northern Russia, Asia, Africa, South America, the north Indian Ocean, and across parts of the Pacific and Atlantic oceans.

The US National Oceanic and Atmospheric Administration (NOAA) said in a report earlier this month that nine of the 10 warmest Junes ever recorded have occurred since 2010.

Related Links
Paris just recorded its hottest temperature in history
A heatwave caused the northernmost settlement on Earth to reach 21 degrees earlier this week
India is battling intense heatwaves that have killed more than 100 people, and experts warn some...
Next on Business Insider
SA's railways have lost a quarter of its freight in five years – making already bad roads worse