Now, Uber is a global behemoth, one of Silicon Valley's most successful companies - also one of the most contentious - and is on track to file its public IPO paperwork any minute now. It's expected to make its public trading debut in May.

Uber now operates in more than 600 cities worldwide, and is said to be seeking a valuation of up to $100 billion (R1 trillion). The 42-year-old Kalanick, though no longer at the helm of Uber, is now said to have a net worth of about $5.8 billion (R81 billion).

But Uber - and Kalanick - have been caught up in one scandal after another over the years, leading to a four-month investigation, more than 20 firings, and Kalanick stepping down from the company.

Here's how it all began - and what Kalanick has been up to since stepping down as CEO.

Maya Kosoff contributed to an earlier version of this post.

Uber CEO Travis Kalanick grew up in Northridge, California — a suburb outside Los Angeles. When he was a kid, he wanted to be a spy. Kalanick got good grades and was athletic growing up, running track and playing football. But he was bullied by older students, and later vowed that he'd never be pushed around by anyone again. Kalanick would eventually follow in the entrepreneurial footsteps of his mom, a retail advertiser: He went door-to-door as a teen, selling knives for Cutco. He then started his first business at 18: an SAT-prep course called New Way Academy. Kalanick's parents, Donald and Bonnie, would be "rider zero" when Uber launched in Los Angeles. Kalanick went to UCLA to study computer engineering. He would drop out in 1998, but with good reason ... ... he started work on Scour, a peer-to-peer search engine, with classmates Michael Todd and Vince Busam. Kalanick collected unemployment while working full-time for Scour, which was run on angel funding obtained by a Scour cofounder's friends and family.

After being sued by several entertainment companies to the tune of $250 billion (R3 trillion), Scour filed for Chapter 11 bankruptcy. Kalanick rebounded with Red Swoosh, a networking-software company. But he clashed with his new business partner, Scour cofounder Michael Todd. Between the post-9/11 stock market crash, the company's pushing of legal boundaries by reinvesting its employees' income taxes back into the startup, and a final falling-out between the cofounders, Red Swoosh almost never made it to exit. But things improved. Kalanick moved back into his parents' house and raised more funding. Then, in 2007, Kalanick sold Red Swoosh to Akamai for $23 million (R321 million) and became a millionaire. While attending the LeWeb technology conference in late 2008, Kalanick first heard the idea for Uber. He envisioned it as a way to lower the cost of black-car service at the touch of a button. But Kalanick's dislike of taxis stemmed from a bad experience in a cab years earlier, when he got into an argument with a taxi driver and jumped out of the moving car. Garrett Camp, Oscar Salazar, and Conrad Whelan built the first version of Uber, a black-car service called UberCab. Kalanick served as a "mega adviser," though he's previously said his title then was "chief incubator." With UberCab, which cost about 1.5 times as much as a cab, you could request a car in San Francisco by sending a text or pressing a button. Early in 2010, Ryan Graves was brought on board as UberCab's general manager. Soon, he'd be named CEO.

UberCab launched in June 2010 in San Francisco. It was a huge hit there, though investors weren't initially knocking down Uber's door to invest ... ... but by summer 2010, Uber raised money from investors: a $1.25 million (R17 million) seed round that included First Round Capital, Kalanick's friend Chris Sacca, and Napster cofounder Shawn Fanning. Uber would go on to raise $19.94 billion (R278 billion) in funding.

In December 2010, Kalanick became CEO and Graves became Uber's general manager again. According to both, the re-arrangement was friendly. After San Francisco, Uber rapidly expanded its services to other US cities. In May 2011, Uber launched in New York City, now one of Uber's biggest markets (more than 168,000 Uber rides are hailed in New York City every day).

Now, Uber is reportedly seeking up to a $100 billion (R1 trillion) valuation in its IPO. In early 2015, Uber announced plans to start testing self-driving cars in Pittsburgh. But the project has faced numerous setbacks, including a fatal crash in Arizona last year. Uber's self-driving car project was that Kalanick was particularly passionate about - he said at the time that he believed the future of Uber depended on it.

"If we are not tied for first, then the person who is in first, or the entity that's in first, then rolls out a ride-sharing network that is far cheaper or far higher-quality than Uber's, then Uber is no longer a thing," Kalanick told Business Insider in August 2016.

But Uber has since had to scale back its self-driving ambitions. In March 2018, an Uber self-driving car struck and killed a pedestrian in Tempe, Arizona. As a result, Uber shut down its self-driving operations in Arizona and decided to resume only limited testing of its vehicles in Pittsburgh last December.

Kalanick's personality — described by those who know him as reckless and arrogant, at times — was one of the reasons Uber found so much success ... ... but in recent years, it also backfired for Kalanick and Uber as a whole.

Uber weathered its first scandal in 2014, when in an interview with GQ, Kalanick called the service "boob-er," since he felt that it helped him attract women. Fast-forward to February 2017, when a former employee named Susan Fowler alleged in a blog post that she was sexually harassed at Uber and experienced gender bias during her time at the company. Kalanick immediately pledged to look into Fowler's investigations, and hired former US Attorney General Eric Holder to lead the investigation.

But the company was pummeled by a seemingly never-ending barrage of bad news in 2017. The New York Times published a bombshell report in February of that year that alleged employees did cocaine during a company retreat and a manager had to be fired after groping multiple women.

Then, on Super Bowl Sunday of that year, dashcam video then caught Kalanick losing his cool in an argument with an Uber driver after the driver confronted him about lowered fares. Kalanick issued an apology and said he'd seek out leadership help in the form of hiring a COO. According to a report from Bloomberg that came out months later, Kalanick had an usual response to the video being made public. The report described Kalanick dropping to his hands and knees and squirming on the floor, saying "This is bad. I'm terrible."

Kalanick later scheduled a meeting with the driver to make things right, but that meeting became contentious as well. Eventually, Kalanick agreed to pay the driver $200,000 (R2.7 million) of his own money.

In March 2017, Kalanick's former girlfriend, the violinist Gabi Holzwarth, came forward to detail sexism she witnessed at Uber during her time dating Kalanick, including a visit by several Uber executives to an escort-karaoke bar in South Korea. But in May 2017, tragedy struck: Kalanick's parents, Bonnie and Donald Kalanick, were in a boating accident in California. Bonnie Kalanick died in the accident, and Donald Kalanick was rushed to the hospital in serious condition. Travis Kalanick wrote on Facebook in early June of that year that his father's condition was gradually improving. 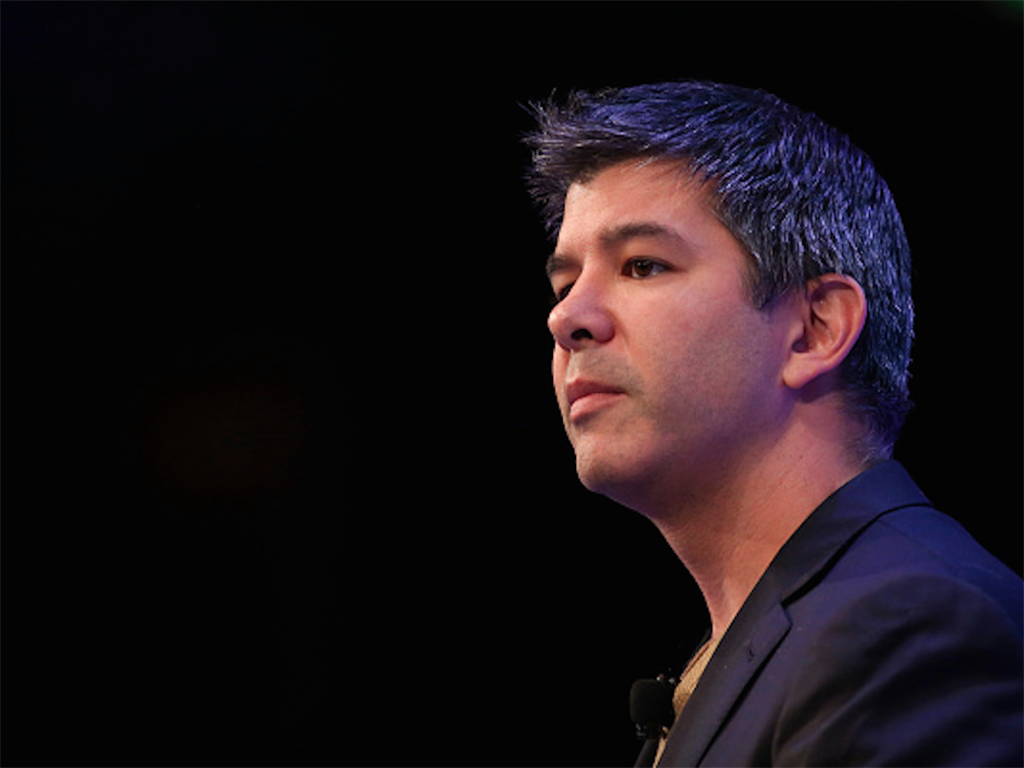 In June, Kalanick's right-hand man, chief business officer Emil Michael, resigned from Uber. Michael reportedly believed that his close friendship with Kalanick and a "weak" board of directors led to his ouster. Also in June, Uber fired more than 20 employees after an investigation revealed 215 claims of harassment at the company. Uber also released a 13-page report after a four-month investigation into the company's culture by former US attorney general Eric Holder's firm. The report recommended sweeping changes to Uber's hard-partying "bro culture," more executive accountability, and renewed efforts to increase diversity at the company.

After the report, Kalanick took a leave of absence from the company for an unspecified amount of time to "work on myself" and to deal with his family tragedy.

But by the end of June 2017, the news broke that Kalanick had resigned. "I love Uber more than anything in the world and at this difficult moment in my personal life I have accepted the investors' request to step aside so that Uber can go back to building rather than be distracted with another fight," Travis Kalanick said in a statement. There was reportedly "hours of drama" between Uber's investors, and five of them demanded Kalanick's immediate resignation. Bill Gurley, who reportedly pushed for the CEO to go, subsequently tweeted: "There will be many pages in the history books devoted to [Travis Kalanick] — very few entrepreneurs have had such a lasting impact on the world." Kalanick remained on the company's board, and even after Kalanick was replaced with now-CEO Dara Khosrowshahi, he tried to maintain control of the company by appointing his own board members. Two months into Khosrowshahi's tenure at Uber, the board voted on changes that would reduce the clout of certain board members, particularly Kalanick.

In March 2018, Kalanick announced that his investment fund, 10100, was buying a controlling interest in a real-estate startup called City Storage Systems. Kalanick joined the company as its new CEO. Kalanick had previously cashed out a portion of his Uber stake as part of an Uber investment from SoftBank, which resulted in $1.4 billion (R19 billion) in cash. He then set up 10100 (pronounced "ten one hundred") for both for-profit investments and philanthropic gifts. Now, we'll have to wait and see how much Kalanick stands to make when Uber goes public.