"There is NO WAY (ZERO!) that Mail-In Ballots will be anything less than substantially fraudulent," Trump tweeted early Tuesday. "Mail boxes will be robbed, ballots will be forged & even illegally printed out & fraudulently signed."

He added: "The Governor of California is sending Ballots to millions of people, anyone ... living in the state, no matter who they are or how they got there, will get one. That will be followed up with professionals telling all of these people, many of whom have never even thought of voting before, how, and for whom, to vote. This will be a Rigged Election. No way!"

As of Tuesday evening, Twitter added a link to each tweet giving users the option to "get the facts about mail-in ballots." 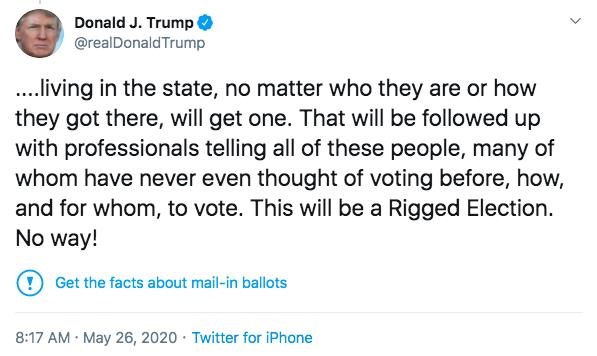 Near the top, there's a section titled, "What you need to know," and includes several bullet points summarizing Trump's claims and whether they hold any merit.

....Twitter is completely stifling FREE SPEECH, and I, as President, will not allow it to happen!

Contrary to Trump's claims, voter fraud - and especially fraudulent use of absentee ballots - is exceedingly rare.

Yet the president has repeatedly railed against absentee voting and falsely claimed it results in widespread voter fraud, even as he and his own family members have voted by mail.

He also claimed during the 2016 election - when he was still trailing then Democratic nominee Hillary Clinton by several points and appeared positioned to lose the race - that there would be widespread voter fraud on Election Day.

"We're going to watch Pennsylvania," then candidate Trump said in August 2016. "Go down to certain areas and watch and study and make sure other people don't come in and vote five times."

He added, "The only way we can lose, in my opinion - and I really mean this, Pennsylvania - is if cheating goes on."

After Trump won the election but lost the popular vote to Clinton, he claimed without evidence that three million to five million people in California had voted illegally, tipping the popular vote in Clinton's favor.

Last week, he went on a crusade against absentee voting and voting by mail by threatening to withhold federal funds from Michigan and Nevada for making it easier for their residents to receive their ballots by mail.

In his first tweet, he wrongly claimed that Michigan's secretary of state, Jocelyn Benson (whom he called "rogue"), was sending every registered voter an absentee ballot, saying it was "illegal" and threatening to cut off funding to the state.

However, he later deleted the tweet after observers pointed out that the state had mailed ballot applications, not ballots themselves, to residents. But Trump then doubled down and claimed, again falsely, that even sending absentee-ballot requests was illegal.

In another tweet, he accused Nevada Secretary of State Barbara Cegavske, a Republican, of sending "illegal vote by mail ballots" and "cheating" by mailing every registered voter a ballot for the state's June 9 primary elections.

Benson told Insider in an interview that Michigan voters approved an amendment to the state's constitution in 2018 allowing absentee voting.

"Everyone has the authority to mail applications to registered voters in our state, and the application is even available on our website," she said. "We did this in our May 5 local elections as well, and both political parties and numerous advocacy and nonpartisan groups do this ahead of every election."

Cegavske's office told Insider in a statement that Cegavske "lawfully declared the 2020 primary election as a mail-in election."

"In a recent court order, a federal judge ruled that Secretary Cegavske lawfully exercised authority granted to her by state law to call for a primary election conducted primarily by mail ballot," the statement said.