Here's what it's like inside Turkmenistan, the secretive Asian dictatorship that is stricter than North Korea, where the streets are paved with marble and gold The central Asian nation of Turkmenistan is one of the world's most secretive and mysterious countries.

Information from the central Asian country is tightly controlled and few people enter, while its human rights record is decried, and it has virtually no free press.

But its president, Gurbanguly Berdymukhamedov, is keen to present the country - and himself - as strong.

Berdymukhamedov, who has been in power since 2006, often shows off by posing with fancy cars or on horseback, but the country might also be heading towards economic collapse.

The country's capital, Ashgabat, is one of the most unusual capital cities in the world, its streets lined with marble and filled with golden statues despite the economic troubles of the natural-resource-rich nation.

While not much information leaks out of the country, we do know a little bit about it. Take a look at all we know about Turkmenistan below:

Turkmenistan is a country in central Asia, with a population of just under six million and plentiful gas reserves.

But it's a highly secretive country that is often referred to as a hermit nation. It strictly controls access to the country, and allowed just 6,000 people to enter in 2016.

One tourist who has been to both countries said that in Turkmenistan: "I could walk around more freely than in North Korea, but it was very apparent I was being watched." The country's leader is President Gurbanguly Berdymukhamedov, who has ruled the country as a dictatorship since 2006. He is unofficially referred to as "The Protector," and is the latest in a line of Turkmen leaders to embrace a cult of personality.

Turkmenistan nominally has elections - Berdymukhamedov won 97% of the vote in the last election.

A 69-foot gold (21 metres) leaf statue of Berdymukhamedov riding a horse was unveiled in the capital city of Ashgabat in 2016 — called "The Protector."

Downtown Ashgabat is filled with huge monuments and buildings, which along with their marble edifices, are often adorned with lavish amounts of gold.

Turkmenistan markets itself as a country that embraces tradition, nature, and manufacturing, as a video made this year to advertise the Caspian Economic Forum, a conference held in the west of the country, showed. But the Turkmenistan is widely derided for its human rights record. Human Rights Watch calls it "one of the world’s most isolated and oppressively governed countries" and says that "all aspects of public life are controlled by President Gurbanguly Berdymukhamedov and his associates."

The economy could also currently be at risk of collapse. The Foreign Policy Centre, a British think tank, warned in 2019 that the country's penchant for marble and strict information control is obscuring reality.

The reality, it says, is that Turkmenistan is "in the middle of a sustained economic crisis that has seen hyper-inflation in the lives of ordinary people and widespread food shortages, all despite its vast gas reserves."

Ruslan Myatiev, the editor of a news website about Turkmenistan based in The Netherlands, told CNN in August that: "There is not enough food in the state-run shops so every morning people have to line up for hours to buy such staples as flour, bread or sugar."

The think tank also warned of Turkmenistan's "massive human rights abuses" and "use of forced labour," and said that the economic crisis has "in turn led to the regime’s repression of its people becoming ever tighter and its personality cult becoming ever more grandiose." Freedom of Information group Reporters Without Borders ranked Turkmenistan last in the world for press freedom in its 2019 World Press Freedom Index. It said that the "government controls all media and the few internet users are able to access only a highly-censored version of the internet." Journalists from news outlets abroad "have been arrested, tortured, physically attacked or otherwise forced to stop working" in the country, it added.

Berdymukhamedov's appearances in the media are often marked by him showing off, such as posing in a sports car or lifting up a gold bar during a parliament session. In footage broadcast by state TV channel Altyn Asyr in 2018, Berdymukhammedov lifted the bar during a cabinet meeting while other politicans clapped.

Jennifer Lopez apologised for singing happy birthday to Berdymukhamedov in Turkmenistan in 2013, saying she was unaware of the country's human rights record. Berdymukhamedov wasn't seen in public for a few weeks this summer, leading to rumours of his death. He proved he was alive by sharing footage of him riding a horse and racing through the desert in a car. 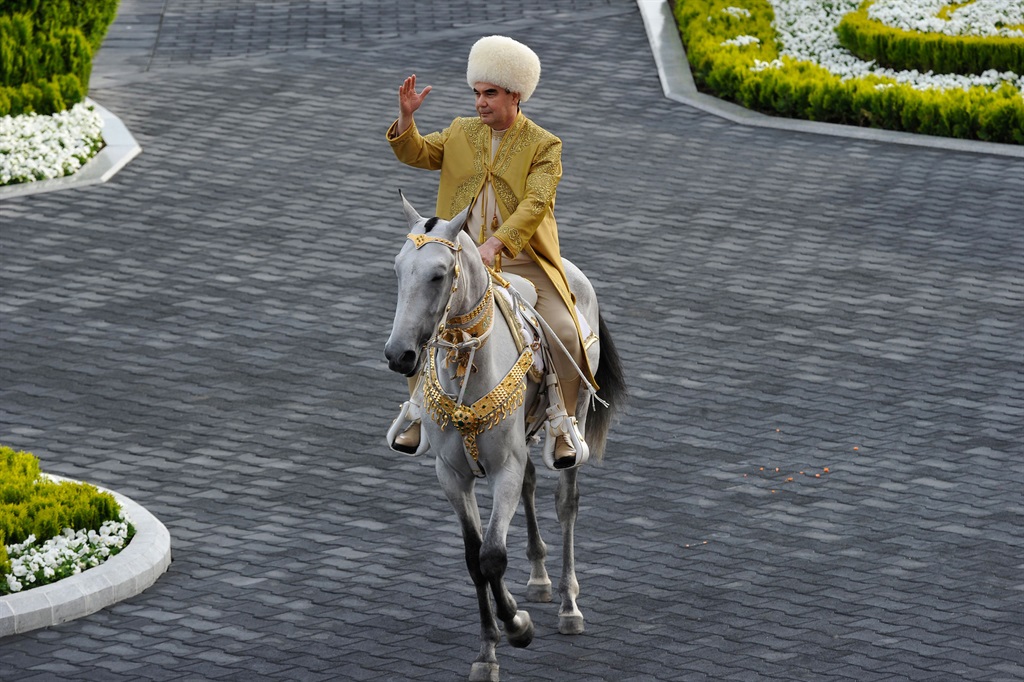 Berdymukhamedov's interactions with other world leaders tend to create some bizarre optics. He gave Russian President Vladimir Putin a dog as a birthday present when they met in Korea in 2017. He follows in the footsteps of the country's first president, Saparmurat Niyazov, who named the month of January after himself, built a $50 million theme park and told people to look after their teeth by chewing on bones. Turkmenistan declared independence from the Soviet Union in October 1991, two months before the union's collapse. Independence celebrations are still a big deal, and the anniversary is marked by parades and army demonstrations. The country, which is slightly larger than California, is largely made up of desert. Turkmenistan has some features that would doubtless be tourist attractions if it were more open. This is the "Gateway to Hell," a crater that has been on fire for more than 40 years in the desert.

And the capital city, Ashgabat, was noted by the Guinness Book of World Records as the home of the most white marble-clad buildings in the world. Turkmenistan was largely made up of nomadic tribes when it got its independence, and the country continues to revere horses. It has a national holiday in honour of them and horses and riders perform daring tricks in year-round shows across the country, as below. The country is hard to access, even if the government will let you in. The EU wouldn't let Turkmenistan Airlines into its air space for eight months this year over safety concerns, only lifting the ban on October 11.

But the country actually wants to become an international transport hub, and is making major investments at Ashgabat International Airport to try and make it happen.