Turkey has been accused of agreeing to hand over Uighur Muslims to China in exchange for access to its Covid-19 vaccines.

The allegations stem from the timing of two events in December: the long-delayed arrival of Turkey's order of vaccines from the Chinese firm Sinovac and Beijing's abrupt move to ratify a 2017 extradition deal with Ankara.

Turkey had planned to start vaccinating people with the Sinovac shot on December 11, according to Al-Monitor. But the first shipment did not arrive until December 30.

The vaccine delay prompted opposition politicians in Turkey to raise concerns that China pressured the ruling Justice and Development Party (AKP) to ratify the extradition deal if it wanted to access the vaccines.

China announced that it had ratified the extradition treaty on December 27. The deal means that Turkey must extradite anyone with criminal charges to China if asked, and vice versa.

Turkey has not ratified the deal, though the country's parliament is expected to discuss it when it reconvenes on January 26, The Nikkei reported. A woman holds a placard at a London protest in support of the Uighur people in October 2020.
Hasan Esen/Anadolu Agency via Getty Images

'Is the Chinese vaccine being held for the return of Uighur Turks?'

The Chinese ratification of the extradition treaty has prompted concern that Turkey would expel its Uighur population to China, where they face intense surveillance and mass detention.

In recent years, China has charged Uighurs with arbitrary crimes, such as growing a beard and receiving calls from other countries. Members of the Uighur diaspora previously told Insider they were too afraid to contact their relatives in Xinjiang for fear of Chinese retribution against their family.

Over the last few years, thousands of Uighurs have fled China for Turkey, whose language and culture are similar to those of the Uighur community. According to The Guardian and Voice of America, Turkey is home to some 50,000 Uighurs, the largest Uighur diasporic group in the world.

At the time of China's ratification, Dilxat Raxit, a spokesperson for the World Uyghur Congress, told Agence France-Presse: "This extradition treaty will cause worry among Uighurs who have fled China and do not yet have Turkish citizenship."

Many Uighurs who had fled China to Turkey do not have Turkish citizenship, meaning Ankara cannot protect them.

Yildirim Kaya, a politician in Turkey's opposition Republican People's Party, asked Health Minister Fahrettin Koca in parliament on December 29: "Is the Chinese vaccine being held for the return of Uighur Turks?"

And Lütfü Türkkan, deputy chairman of the opposition The Good Party, outright accused the government of striking a deal with Beijing.

"China wants the extradition of some Uighurs in Turkey," he said in parliament, according to TR724. "They will return some Uighur Turks in Turkey to China to get the vaccines."

Turkish Foreign Minister Mevlüt Çavusoglu responded to the claims by saying that China had asked for Turkey to extradite Uighur Muslims to China, but that Turkey had declined.

"China had such demands but we have not taken such steps," Çavusoglu said, according to The Nikkei. 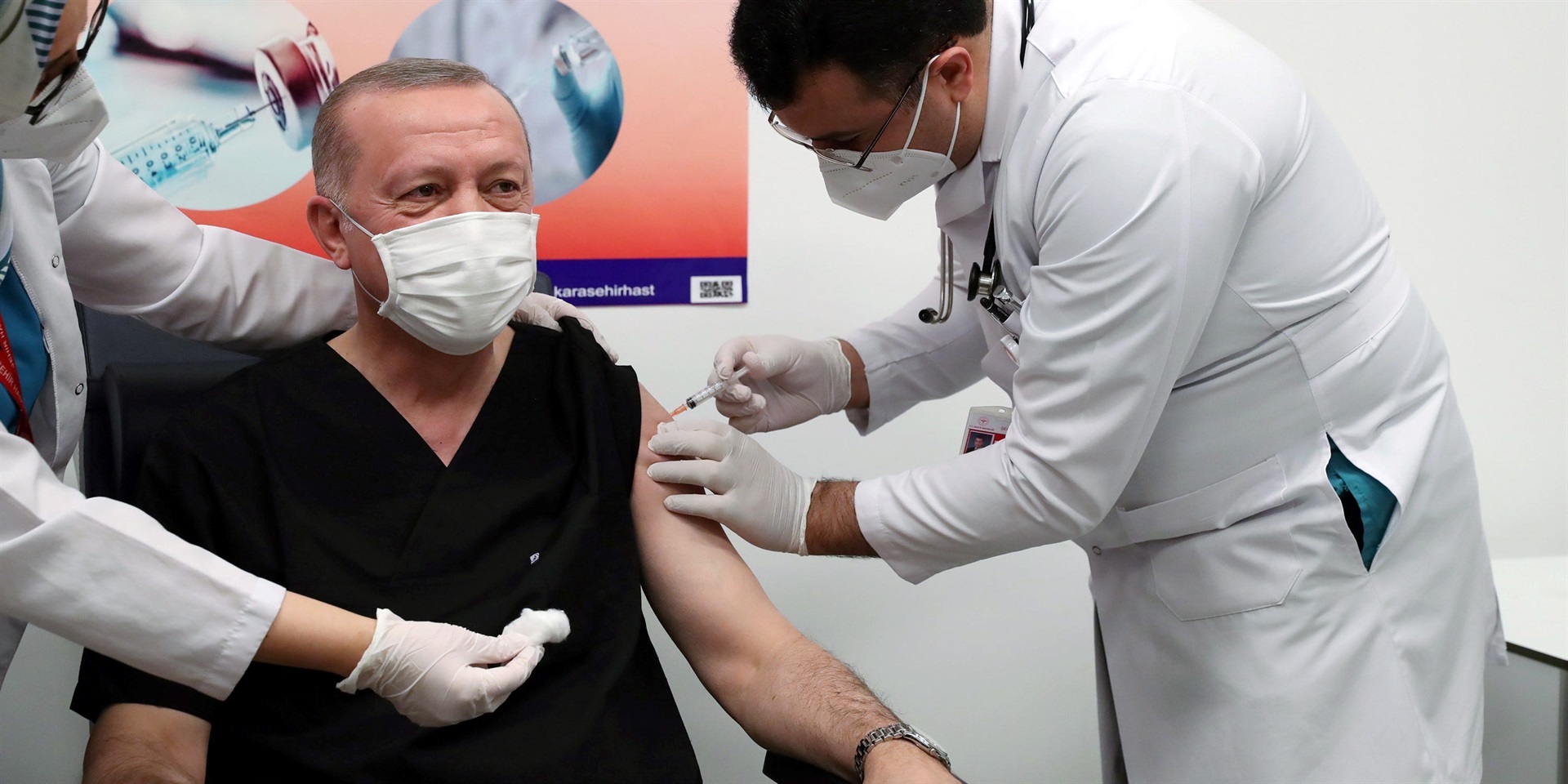 Erdogan receives a dose of Sinovac's COVID-19 vaccine in Ankara, Turkey, on January 14, 2021.
Xinhua via Getty

Çavusoglu also denied that the government had agreed to ratify the 2017 agreement in exchange for vaccines.

"Vaccines and East Turkestan or Uighur Turks have no relation at all," he said, referring to the name Uighurs use for their homeland. China refers to it as Xinjiang.

A Turkish foreign ministry source told Voice of America: "It is extremely wrong to view the extradition treaty with the PRC [People's Republic of China] as targeting Uighur Turks."

Since 2016, China has arbitrarily detained at least 1 million Uighurs in scores of camps across Xinjiang, claiming they are a terror threat.

Despite Turkey's place as a safe haven for Uighurs, President Recep Tayyip Erdogan has appeared to cozy up to China in recent years, putting those Uighurs' fate in flux.

Between 2009 and 2015, Erdogan had openly welcomed Uighurs to his country, but much has changed since.

For example, in July 2019, Turkey did not sign a UN Human Rights Council letter that slammed China's "mass arbitrary detentions and related violations" of Uighurs. A man protesting China and its Uighur policies in Brussels, Belgium, in February 2020.
Dursun Aydemir/Anadolu Agency via Getty Images

The same month, Erdogan told President Xi Jinping that Uighurs in Xinjiang were "happy," according to Chinese state media. Ankara later said that Erdogan had been misunderstood, a claim China denied.

Ahmet Davutoglu, a former ally of Erdogan and opposition leader, said in December 2019 that there was "a special, unquestioning favoritism toward China in recent times," Al Monitor reported.

And in early 2020, Erdogan's party blocked a move by its opposition to set up a parliamentary committee to investigate human-rights abuses in Xinjiang, Arab News reported.

However, some Uighurs believe that opposition to Turkey's extradition deal will be enough to derail the ratification.

"The Chinese Communist Party will take all the actions it can to force the Turkish government but we don't think [the treaty] will pass. The Turkish people and NGOs will stand up against it," Kamer Artis, a Uighur activist living in Turkey, told The Guardian.

"According to the CCP, we are all terrorists, so is it sound logic for the Turkish government to deport so many Uighurs? We will not lose hope … We believe in the power of people more than governments."