Trump suggests counting votes could lead to 'violence in the streets' 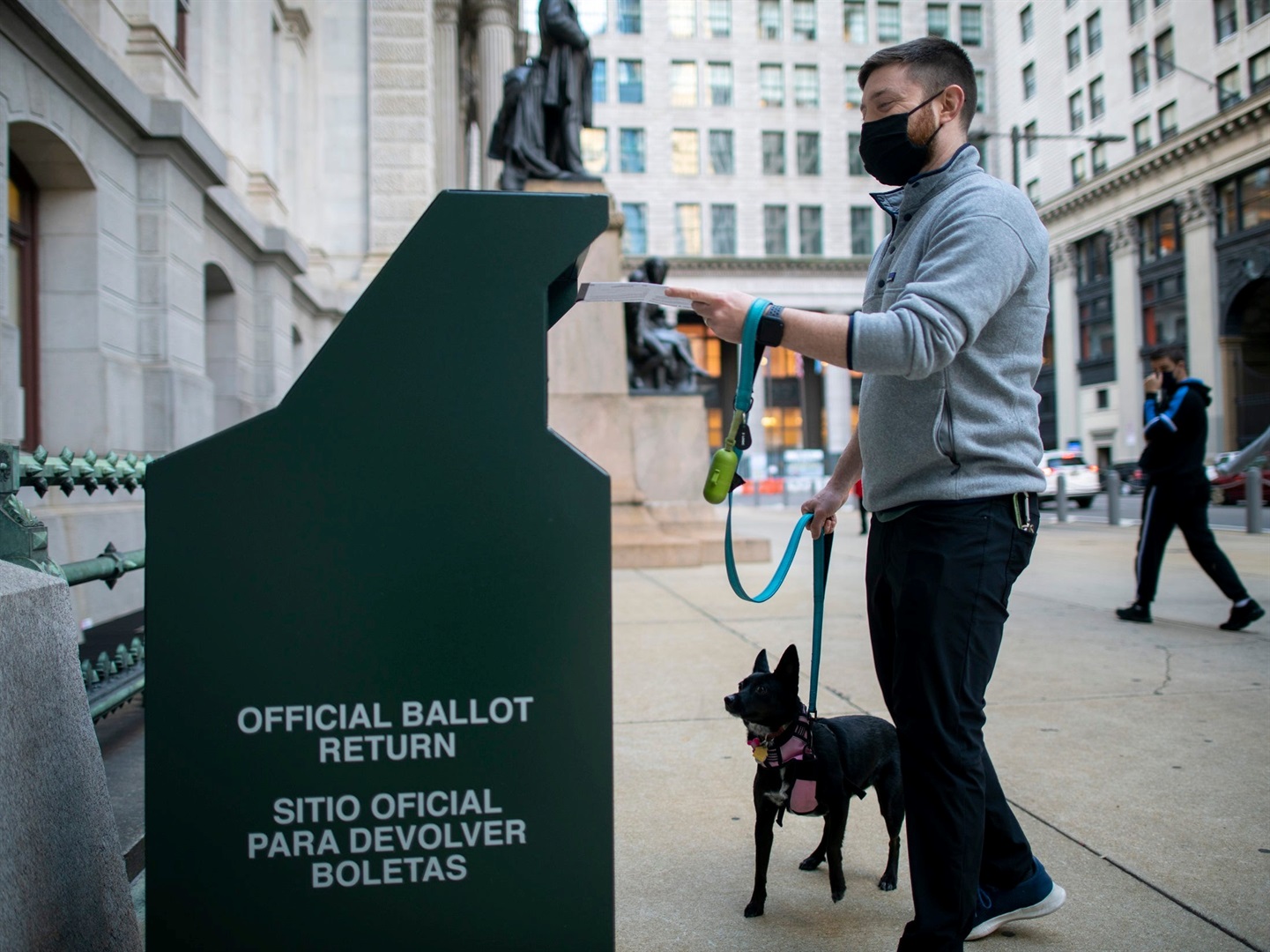 A voter casts his early voting ballot at drop box outside of City Hall on October 17, 2020 in Philadelphia, Pennsylvania.
Mark Makela/Getty Images

President Trump is pinning his hopes in the commonwealth of Pennsylvania on preventing all votes that are cast from actually being counted, with his latest dubious attack on mail-in voting flagged by Twitter on Monday as potentially "misleading."

In 2016, Trump won Pennsylvania by less than 45,000 votes. This time around, however, former Vice President Joe Biden has been leading the polls there ever since he won the Democratic nomination — on the eve of the election, he's up by an average of 4.9%.

Because of the pandemic, all Pennsylvanians are eligible to cast their vote by mail. But registered Democrats are far more likely to do so — only 25% of mail-in ballots were requested by registered Republicans — which could be in part because of unsubstantiated claims made by the president. The latest: that counting these votes, up to three days after the election itself, "will allow rampant and unchecked cheating."

The president repeated that lie in person.

Almost everything in this paragraph is false. A reminder that PA ballots have to be postmarked by election day - voters can't simply vote after the election and put their ballots in the mail. Election results are never final on election night. https://t.co/SML4GbH3ug

Neither Trump nor his allies have ever provided a coherent explanation for how counting ballots could enable fraud, or why Democrats, if they were capable of stealing an election, would rely on ballots received after Election Day that are already subject to litigation. What they have done is explain that challenging the legitimacy of Americans' votes — stopping them from being counted — is central to their strategy.

As Axios reported on Sunday, three aides to the president have said he plans to claim "victory" on Tuesday night even if votes are not done being counted in bellwether states like Pennsylvania. Accordingly, "Trump's team is preparing to falsely claim that mail-in ballots counted after Nov. 3 — a legitimate count expected to favor Democrats — are evidence of election fraud."

However, Pennsylvania Secretary of State Kathy Boockvar explained on NBC's Meet the Press, "elections have never been called on election night"; it is news organizations, not state governments, that call winners and losers, the day of, based on exit polls and statistical probabilities.

Last month, Pennsylvania's highest court upheld a policy of counting mail-ballots that arrive up until Nov. 6, so long as there is no evidence they were cast after Election Day. The US Supreme Court this week decided not to hear a Republican challenge to that ruling, for now deciding not to penalize voters for delays in mail delivery; it could revisit the issue pending future litigation.

On Twitter, Trump called that non-decision "dangerous," adding another claim about mail-in voting that sounded more like incitement: "It will also induce violence in the streets." In-person, he repeated what appeared to be a threat: "There's a lot of bad things that can happen with the streets. You're going to have a population that's going to be very angry."

It is unlikely, albeit not impossible, that it will come to that. As of Nov. 1, 82% of Democrats who requested mail-in ballots have already returned them. The 2.4 million ballots returned overall is also equal to just under 40% of all votes cast in 2016.

If Trump loses Pennsylvania, odds are he's already lost it.