On Saturday, a US Special Forces operation led to the death of ISIS leader Abu Bakr al-Baghdadi in Syria. In his announcement Sunday morning, US President Donald Trump said Baghdadi "died like a dog" while he detonated a suicide vest that killed himself and three children.

The White House released a photo from inside the Situation Room following the raid. Two photos, actually. They're striking.

Both photos, from slightly different angles, show Trump sitting at the head of the conference room table. Vice president Mike Pence is sitting to his left. Both are looking directly into the camera, which hovers above the other end of the table. 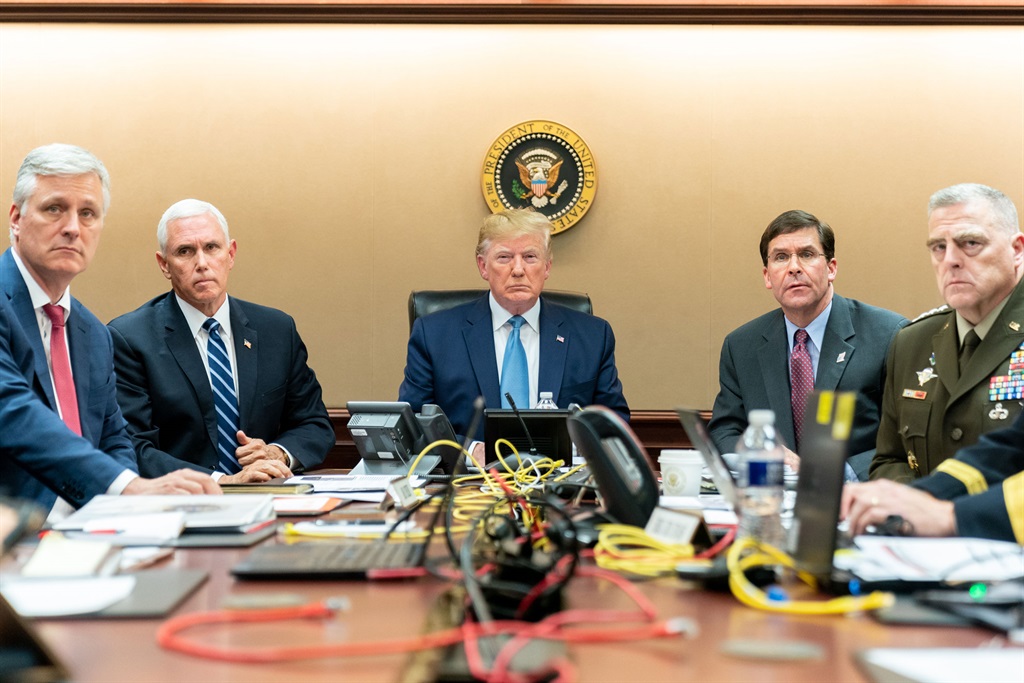 Trump along with Vice President Pence and members of his national security team.
Official White House Photo by Shealah Craighead 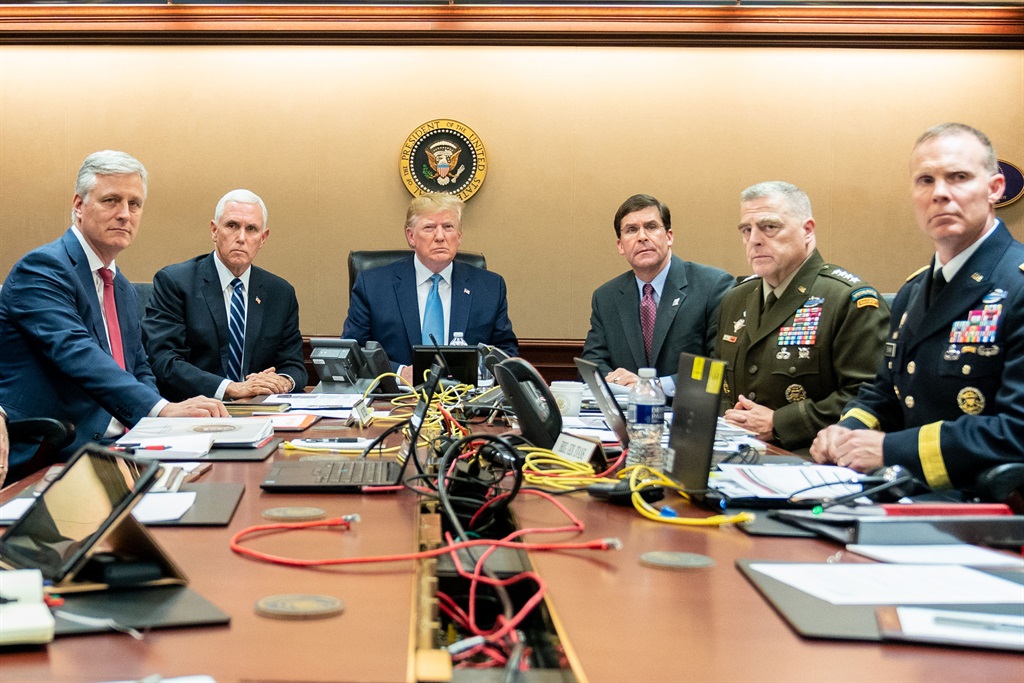 They are surrounded by Mark Esper, the secretary of defense and a former weapons manufacturer lobbyist, National Security Adviser Robert O'Brien, and generals Mark A. Milley and Marcus Evans, who are in military regalia and whose attention is also mostly directed at the camera.

It is a stark contrast to the Situation Room photo taken on May 1, 2011, during the military raid that killed al-Quaeda leader Osama bin Laden, under Barack Obama's administration. That one takes place in a smaller, more poorly lit conference room within the Situation Room. And as Lawfare editor Quinta Jurecic noted on Twitter, it is not staged. US President Barack Obama and Vice President Joe Biden, along with members of the national security team, receive an update on Operation Neptune's Spear, a mission against Osama bin Laden, in one of the conference rooms of the Situation Room of the White House, May 1, 2011.
Pete Souza, Official White House Photographer

Obama is not at the center of the photograph. He is not even at the head of the table. There are coffee cups scattered on the table. Most of the national security team aren't even wearing suit jackets. And none of them are looking at the camera.

Instead of getting an impression that the photographer is trying to depict the glory and power of the US president, you get the impression that these are a bunch of professionals focused on a solemn job: Watching over a dangerous operation that would inevitably lead to death, and which could potentially go horribly wrong. For Trump, on the other hand, there is no distinction between the image of the job and the job itself.

Pete Souza, the former White House photographer who took the Obama administration's Situation Room photo, noted that the metadata of the Trump photo was marked 17:05:24, or 5:05 p.m. The raid on Baghdadi, according to the New York Times, took place at around 6:10 p.m. It suggests that Trump's photo was staged before the raid had even happened, and was not one that was taken during the raid itself.

Trump's White House tried to put this kind of image into the American imagination before. In April 2017, he launched missiles at military infrastructure controlled by Syrian dictator Bashar Assad in response to a chemical weapons attack. The White House released a Situation Room-style photo taken from Trump's Mar-a-Lago club and described it as a "secure location." It was taken by Shealah Craighead, who also took the new Trump photo. Everyone is sitting on small wooden chairs. You probably don't remember it. Time will tell how the new photo fares. Trump being briefed on the Syria strike.
White House/Shealah Craighead

There are other odd details about Trump's new Situation Room photos. There are a lot of colourful ethernet cables that aren't connected to anything, slightly undermining the seriousness of the moment. And while Trump appears to have briefing papers in front of him - a rare sight, indicating he may have indeed taken this moment more seriously than much of the rest of his presidency - they are mostly obscured compared to the people around him, suggesting he is the least informed person at the table.

It is also precisely the type of photo Trump would have criticised during Obama's presidency. "Stop congratulating Obama for killing Bin Laden," he said in 2012. "The Navy Seals killed Bin Laden."

Update: A previous version of this article said the raid reportedly took place at 3:30 p.m. According to more recent reporting, it took place at approximately 6:10 p.m.