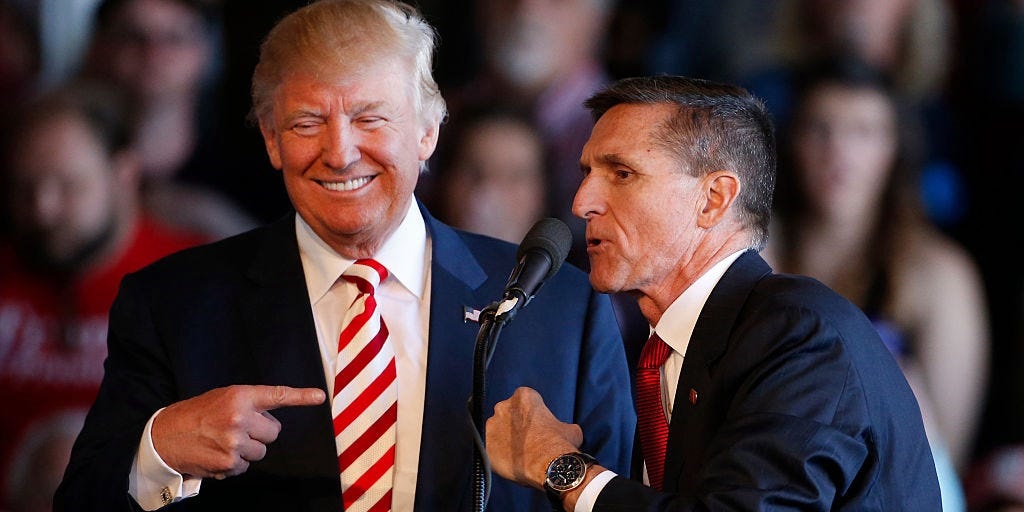 "It is my Great Honor to announce that General Michael T. Flynn has been granted a Full Pardon. Congratulations to @GenFlynn and his wonderful family, I know you will now have a truly fantastic Thanksgiving!" Trump tweeted.

Flynn pleaded guilty in December 2017 to one count of lying to investigators as part of the FBI's investigation into Russian interference in the 2016 presidential election. Specifically, he admitted to misleading FBI investigators in a January 2017 interview about his communications with Sergey Kislyak, then Russia's ambassador to the US, during the 2016 transition period.

Flynn initially cooperated with the FBI after pleading guilty, and prosecutors praised the former national security advisor for giving them useful information related to several ongoing criminal investigations in addition to the Russia probe.

But Flynn later decided to take a more combative stance, firing his entire defense team and replacing it with Sidney Powell, who often spouts conspiracies and accuses the Justice Department and FBI of running a "deep-state" plot against Flynn and Trump. Since taking over as Flynn's defense lawyer, Powell has worked overtime to try to get his case dismissed.

Flynn in January filed a motion to officially withdraw his guilty plea in the Russia investigation, citing "the government's bad faith, vindictiveness, and breach of the plea agreement."

Shortly after, the Justice Department reversed its recommendation for Flynn to only receive probation and asked a federal judge to sentence him to up to six months in prison. They made the request because they said Flynn was no longer showing the remorse he once did when they initially made a sentencing recommendation and that he had now taken on a more defensive posture.

"Far from accepting the consequences of his unlawful actions, he has sought to blame almost every other person and entity involved in his case, including his former counsel," prosecutors wrote in a memo to US District Court Judge Emmet Sullivan. "Most blatantly, the defendant now professes his innocence."

But in May, the department filed a motion to drop the Flynn case altogether, a move that prompted the resignation of one of the prosecutors overseeing the case and drew swift backlash from law enforcement veterans who accused Attorney General William Barr of showing leniency toward the president's allies. Trumpworld, on the other hand, celebrated the decision and said it was proof that Flynn was inappropriately targeted by the Obama administration because of his ties to Trump.

The president has repeatedly accused the FBI and DOJ of entrapment in the Flynn case, and more broadly, of engineering the Russia investigation to undermine Trump's presidency and illegally requesting that Flynn's name be "unmasked" in intelligence reports.

But that conspiracy theory, dubbed "Obamagate," got blown to pieces in May, when The Washington Post reported that Flynn's name was never masked in the first place. That month, Barr tapped US attorney John Bash to review "unmasking" allegations related to the Flynn case amid pressure from the president and Flynn's allies. But in October, in another blow to Trump, the investigation ended without any criminal charges or a public report.

Sullivan halted the DOJ's efforts to drop the case and said that because of its political nature, he wanted third parties to weigh in as he considered the motion. One of those outside experts, the former federal judge and veteran prosecutor John Gleeson, later filed a brief in the case saying the DOJ engaged in "highly irregular conduct to benefit a political ally of the President."

This story is breaking. Check back for updates.