Google search results for “Trump News” shows only the viewing/reporting of Fake News Media. In other words, they have it RIGGED, for me & others, so that almost all stories & news is BAD. Fake CNN is prominent. Republican/Conservative & Fair Media is shut out. Illegal? 96% of....

....results on “Trump News” are from National Left-Wing Media, very dangerous. Google & others are suppressing voices of Conservatives and hiding information and news that is good. They are controlling what we can & cannot see. This is a very serious situation-will be addressed!

President Donald Trump on Tuesday made a bold accusation: that Google is intentionally promoting negative news stories about him in its search results, and "silencing" conservative voices.

That assertion, which Trump posted on his Twitter account, is backed up by scant evidence, and Google quickly responded by saying that "Search is not used to set a political agenda, and we don't bias our results toward any political ideology."

Trump stated that "96% of results on 'Trump News' are from National Left-Wing Media," calling the issue "very dangerous." But that figure stems from an unscientific study conducted by conservative opinion blog PJMedia, which published a blog post on Saturday stating that the majority of all Trump-related search results on Google's News tab come from outlets that PJMedia categorised as "liberal."

We wanted to see for ourselves what happens when you search for Trump news in Google's News section, so we performed a basic, and admittedly unscientific, analysis of our own.

Keep in mind that Google News uses a mix of both generalised algorithms and personalised features to generate results — so to some extent, each person's results will look somewhat different based on their past activity and preferences on Google sites.

And of course, these results reflect just one day's worth of popular news stories on a limited number of topics. The fact that certain publications might appear more frequently than others in the results does not tell us anything why that is the case — and it certainly doesn't prove that results are "rigged." More likely, the results simply reflect the credibility of the news organisations covering a given topic.

Here's how many news articles on Google News come from publications associated with right and left-leaning readers:

We started with the phrase "Trump news," since this is the one Trump cited in his Tweet. The majority of the results are from publications with a more left-leaning audience. We used data collected by both the Columbia Journalism Review and Pew Research Centre that ranked media outlets on where their audience falls on the political spectrum. These rankings don't necessarily mean a publication is "liberal" or "conservative," only that their readers identify in one of those groups.

Note that it wasn't always possible to label a publication based on its audience's political ideology. And we also took note of how many opinion stories popped up in the results.

Same thing goes if you search Donald Trump's name: you'll get a slew of publications with left-leaning audiences, but also several moderate publications. When searching "Trump North Korea," you're served with several opinion columns rather than straight news stories. Google marks them with the word "Opinion." If you search for "Trump Stormy Daniels," you won't see any articles from a major news source with a right-leaning audience. Typing in "Trump Russia" provided results from a wider variety of sources. The tops result on the first module is from USA Today, considered a publication read by the political middle, while the top result on the second is from Fox News. 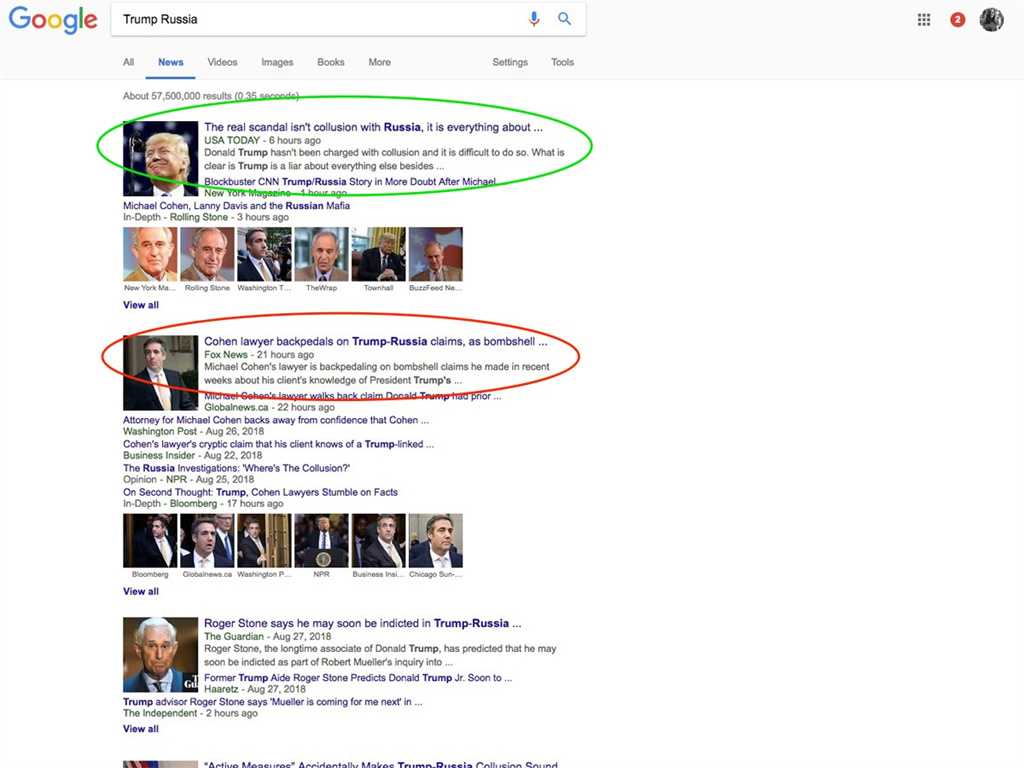 While Google Search seems to present news stories from sources favoured by more liberal-leaning audiences, there could be plenty of good reasons for that. 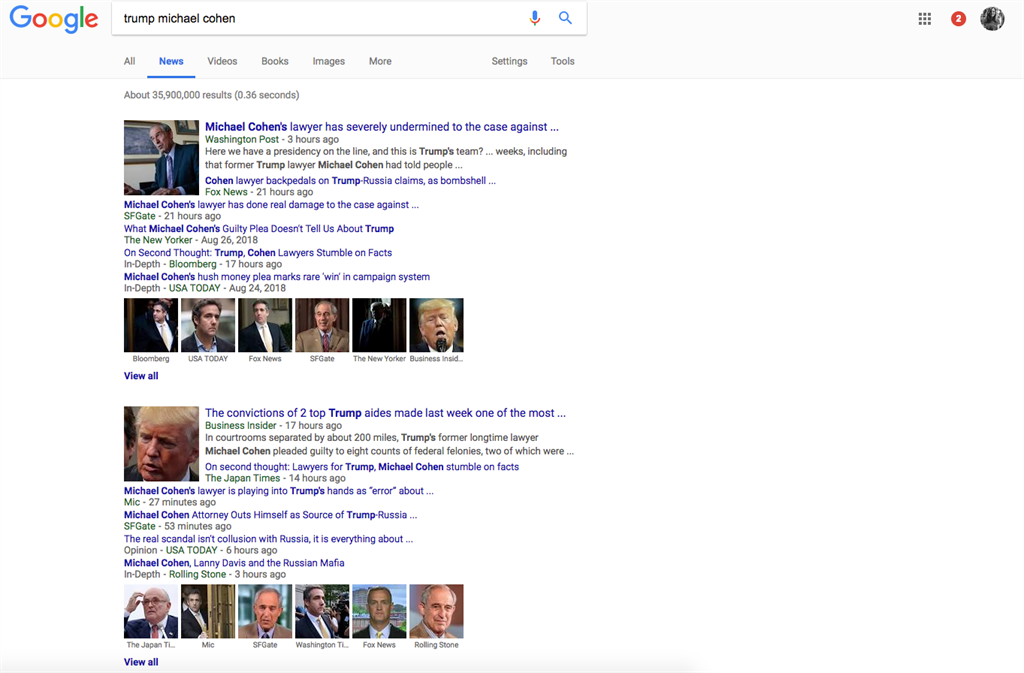 In a handful of quick searches, there were zero instances where articles from conservative news sources appeared more often than articles from publications with left-leaning or moderate audiences. But there could be a few key reasons why Google Search showed me stories from sources with more left-leaning audiences.

One reason could be that those are the sources I read on my own time. While I don't often check CNN and it appeared often in my results, I do read stories from The New York Times, Washington Post, and — obviously — Business Insider. I use Google Chrome as my main browser, and it's possible that's the reason those news sources appeared more often for me.

Another reason could be that there just aren't that many centre-right publications.  According to CJR's analysis, publications like ABC News, Politico, and CNN fall just to the left of centre in terms of their readership. But there are very few similar centre-right sites. Here's how CJR puts it:  "There are very few centre-right sites: sites that draw many Trump followers, but also a substantial number of Clinton followers. Between the moderately conservative Wall Street Journal, which draws Clinton and Trump supporters in equal shares, and the starkly partisan sites that draw Trump supporters by ratios of 4:1 or more, there are only a handful of sites."

Because Google says it's committed to "high-quality content" in response to search queries, it likely steers clear of far-left and far-right media outlets in its results to avoid biased news stories.

In other words, it's possible that Google's search results for Trump news are less biased precisely because of the type of publications that appear in its results.