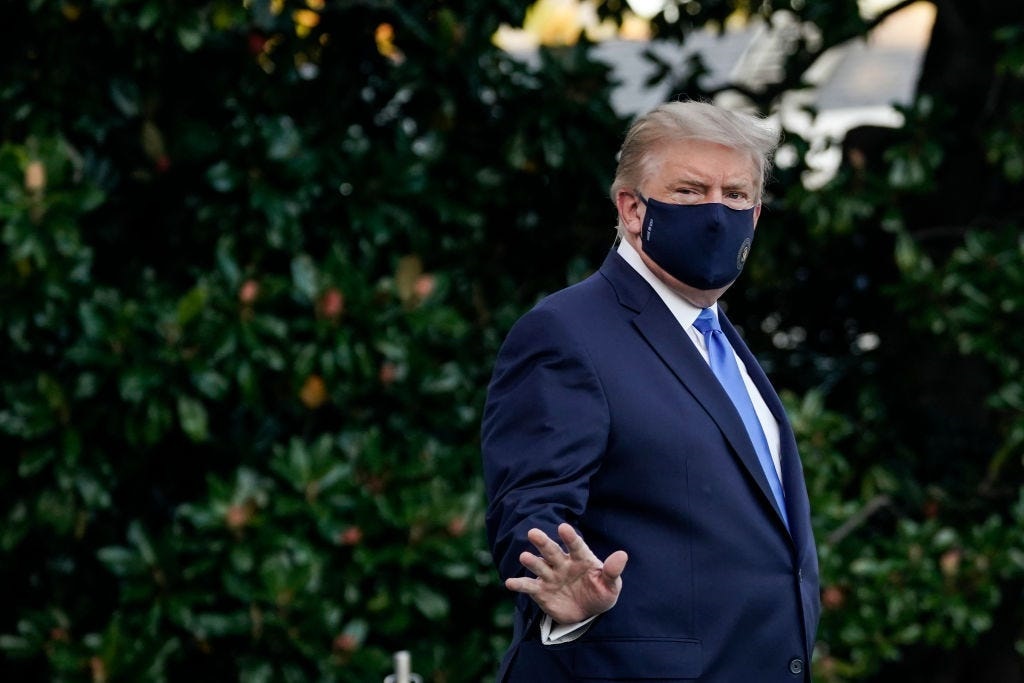 US President Donald Trump left the Walter Reed Medical Centre on Monday evening, roughly three days after he was admitted with coronavirus symptoms.

The president has been fever-free for more than 72 hours and his oxygen levels are normal, Trump's physician, Dr. Sean Conley, said on Monday.

"Over the past 24 hours, the president has continued to improve," Conley told reporters. "He's met or exceeded all standard hospital discharge criteria."

Trump returned to the White House medical unit, where he'll continue his care. Before he left Walter Reed, doctors planned to administer a fourth dose of remdesivir, the FDA-authorised antiviral treatment Trump has been taking since Friday. The drug is typically given to hospitalised patients with a severe infection who require ventilators or ICU admission.

"Though he may not entirely be out of the woods yet, the team and I agree that all our evaluations and most importantly his clinical status support the president's safe return home, where he'll be surrounded by world-class medical care 24/7," Conley said.

But he noted that Trump's physicians were still "on guard," since Trump hasn't reached the seven- to 10-day window when severe coronavirus cases typically take a turn for the worse. They're not yet sure what the effects will be of giving Trump experimental drugs relatively early in the course of his infection.

"If we can get through to Monday with him remaining the same or improving, better yet, then we will all take that final deep sigh of relief," Conley said, referring to next Monday, October 12.

Trump's treatment will remain largely the same at the White House

Trump's transfer to the White House medical unit may not make much of a difference in terms of his care.

"To me, that's no different than saying, 'Hey, I'm moving a patient from the intensive-care unit to the intermediary floor,'" Dr. Panagis Galiatsatos, a pulmonary physician at Johns Hopkins Bayview Medical Center, told Business Insider.

Conley said the president will continue to receive the steroid dexamethasone after he departs Walter Reed, and will also get his fifth and final dose of remdesivir there.

"The White House is not my house or your house," Dr. Helen Boucher, an infectious disease physician at Tufts Medical Center, told Business Insider. "They have a lot of capability to do treatment there, and I know there are very good physicians managing this."

White House doctors will likely be paying especially close attention later this week, since patients who get severely ill are typically admitted to the hospital or ICU around 10 days after their symptoms start. By that point, some develop pneumonia, sepsis, or acute respiratory distress syndrome. If Trump's first symptoms appeared on Thursday, when he got his positive test result, the crucial seven- to 10-day window would be this coming Wednesday through Saturday. The president's doctors haven't, however, revealed exactly when he started feeling sick.

"We all remain cautiously optimistic and on guard," Conley said. "We're in a bit of uncharted territory when it comes to a patient who's received the therapies he has so early in the course."

Trump's treatments raised questions about the severity of his illness

Trump's doctors confirmed that he's gotten supplemental oxygen twice; at least one of those times was on Friday at the White House. His blood-oxygen levels dipped to 93% on Saturday, Conley said — below the normal range. When asked if Trump's oxygen levels had dropped below 90%, Conley said the president's levels didn't reach "the low 80s." The World Health Organization defines "severe" COVID-19 patients as those with blood oxygen levels lower than 90%.

On Monday afternoon, the president tweeted that he was "feeling really good."

"Don't be afraid of Covid. Don't let it dominate your life," Trump wrote. "We have developed, under the Trump Administration, some really great drugs & knowledge. I feel better than I did 20 years ago!" However, the president has received far more than the standard care for COVID-19 — a level of attention and access to treatments that almost nobody else can get.

Trump got an experimental antibody cocktail made by the biotech company Regeneron on Thursday evening, a White House official told CBS News. The therapy hasn't been authorized by the FDA so isn't publicly available, but it was recently found to reduce a patient's viral load — the amount of virus in the body — in a clinical trial of 275 people. Those who got the treatment also saw their symptoms resolve more quickly than those who received a placebo.

Trump also received the steroid dexamethasone on Saturday. That puzzled many doctors, since the treatment is usually reserved for the sickest coronavirus patients. Some physicians wondered whether Trump's condition was worse than his medical team let on, while others guessed he may have been over-treated — perhaps at his own behest.

"Donald Trump is the VIP of VIPs — and just by his personality, he's aggressive, he wants to do stuff," Dr. Jeremy Faust, an emergency-medicine doctor at Brigham and Women's Hospital, told Business Insider. "I don't envy the physicians who have to have these conversations."

But Conley said the president was simply "holding court" with his medical team at Walter Reed.