The January 6 panel revealed a new video showing how Trump melted down while recording a message on January 7, 2021.
January 6 House Select Committee

A series of video clips shown by House committee investigating the Capitol riot gave shocking insight into former US President Donald Trump's behaviour behind the scenes.

The video from January 7 last year — around 24 hours after rioters swarmed the US Capitol in an effort to overturn the American presidential election — was played during the January 6 panel's eighth public hearing on Thursday.

President Trump on January 7th: "This election is now over. Congress has certified the results -- I don't want to say the election's over."#January6thHearing pic.twitter.com/tZ5urGjsZZ

In the video, Trump was seen taking more than 10 seconds after being cued to adjust his posture and facial expression, before beginning with his statement: "I would like to begin by addressing the heinous attack yesterday." Trump looked around uncertainly and spent 10 seconds appearing to adjust his posture, strike a pose, and steel himself before launching into his address.
Januay 6 Select Committee

However, this was but one of multiple takes Trump went through to record his nationwide address. Right after the first pause, Trump appeared to signal for a do-over.

In the second video shown by the panel, Trump stopped in the middle of recording after appearing to struggle with disavowing the violence during the riot.

"You can't say that," Trump remarked, highlighting the phrase "you broke the law," which was presumably displayed on the teleprompter at the time.

In another video, the former president was seen banging on the podium in frustration after failing to say the word "defiled."

"Demonstrators who infiltrated the Capitol — have defied the seat — it's defiled, right?" Trump said. "See, I can't see it very well. Ok. I'll do this! I'm gonna do this. Let's go." The former president stopped recording his statement during one take because he had trouble saying the word "yesterday."
January 6 Select Committee

In the fourth clip played by the panel, Trump paused partway through his address and began debating the language with his daughter Ivanka. He refused to say four words suggested by aides: "The election is over."

Trump read off the teleprompter: "But this election is now over. Congress has certified the results."

He then paused and back-pedalled. On more than one occasion, Ivanka Trump interjected to give suggestions on what her father should say.
January 6 Select Committee

His daughter Ivanka was then heard prompting him: "But, Congress has certified…"

"Now — I didn't say over — Go to the paragraph before," Trump said.

The panel's fifth video clip showed Trump flapping his arms and puffing up his chest. This time, however, he stumbled on the word "yesterday."

"Yesterday's a hard word for me," he commented.

"Just take it out," Ivanka said. Ivanka Trump suggested that her father simply omit the word "yesterday," which he had trouble saying in the video.
January 6 Select Committee

"Good, take the word 'yesterday' out. Cause, it doesn't work with — the heinous attack — on our country. Say, 'on our country.' Wanna say that?" he said.

"No, keep it," Ivanka said in the video.

In the committee's sixth clip, Trump grimaced while attempting to make it through a line stating that his goal was to "ensure the integrity of the vote." And in the following video, he slammed the podium in frustration after failing to get through the same line again. 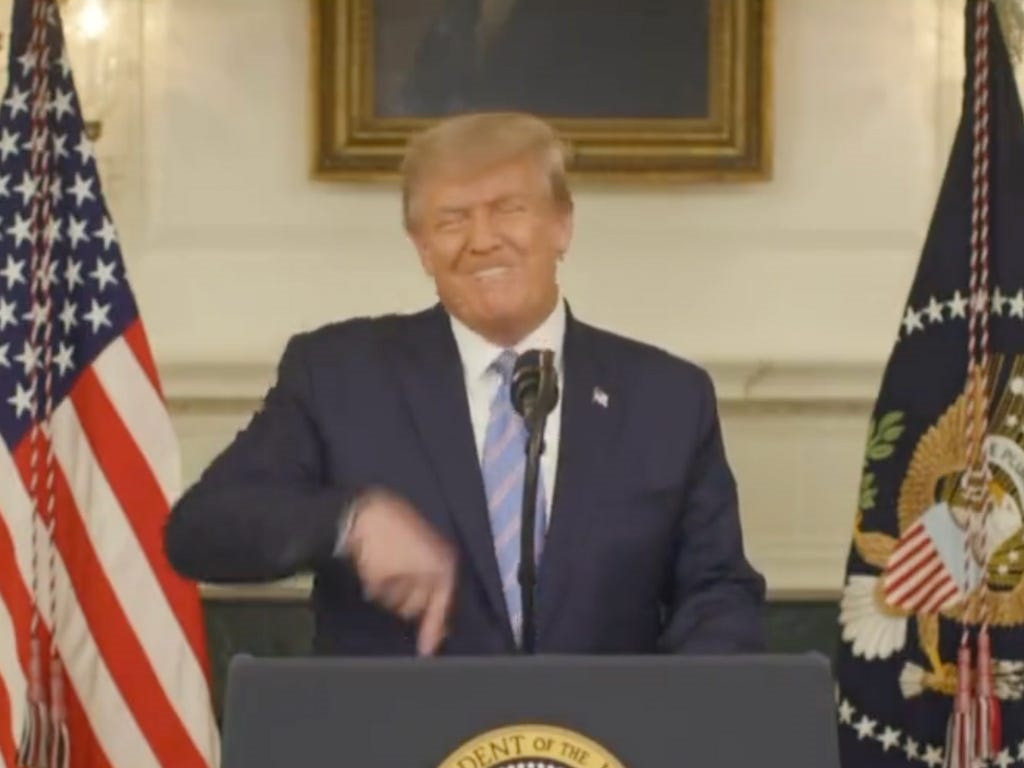 Trump was seen grimacing, frowning, and signaling abruptly for a re-take of his speech after fumbling lines.
January 6 Select Committee

The former President eventually did make it through the entire speech, which ended up being a two-and-a-half minute address.

The January 6 panel revealed a new video showing how Trump melted down while recording a message on January 7, 2021.
January 6 House Select Committee

The panel also showed two clips of Trump struggling to make it through a speech in the Rose Garden on January 6. According to testimonies from former Trump staffers, Trump had gone off-script when he called the Capitol protesters "very special" while asking them to "go home."

Never-before-seen raw footage of Trump recording his message in the Rose Garden. pic.twitter.com/yDZsQ3zZfM

Trump has repeatedly insulted his successor Joe Biden's mental faculties with his campaign ads, calling him "sleepy Joe" and baselessly accusing him of using performance-enhancing drugs on the campaign trail.

The January 6 committee has played testimony of several former Trump staffers recounting his unhinged behaviour before, during, and after the Capitol riot.

For instance, former Trump White House aide Cassidy Hutchinson testified that Trump had once thrown his lunch against the wall in a fit of anger. She also said that Trump had a physical altercation with a Secret Service agent after his request to visit the Capitol during the riot was denied.

Trump has denied both claims, saying that hurling his food in anger was "not my thing" and that it would have been very hard for him to attack a Secret Service agent because they can "lift 350 pounds."

Trump's post-presidential press office did not immediately respond to a request for comment from Insider.