Trump at the NATO summit is like Homer Simpson trying not to screw up, according to the UK's most feared journalist 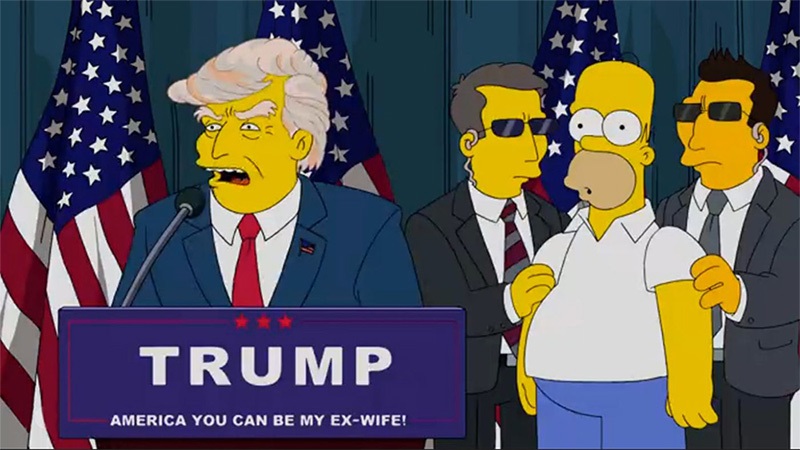 An episode of "The Simpsons" from 2000 that appeared to predict Donald Trump becoming US president.
20th Century Fox

Watching President Donald Trump at the NATO summit in England is like watching Homer Simpson tip-toeing around, trying not to cause carnage, one of the UK's leading broadcasters has said.

"In my head he's morphed slightly into Homer Simpson," Emily Maitlis told the BBC's Electioncast on Tuesday, referring to the bumbling character in "The Simpsons."

"I imagine him sort of tiptoeing around a sitting room in carpet slippers, or maybe those fluffy white ones you get in posh hotels."

So, Trumpâ€™s visit here in #London has the British media hilariously mocking him. @maitlis on @BBCNews just compared Trump to Homer Simpson in glorious prose! ??????#NATO

"Now that it's come out, he's bumped into the standard lamp and you're not quite sure what he's going to do next," she added.

In recent weeks, British journalists have pressed Trump to clarify whether a post-Brexit trade deal between the US and UK will include the National Health Service (NHS).

Trump said in June the NHS - which pollsters at Ipsos Mori say is most critical voter issue in the UK - must be "on the table" in any future trade deal.

However, he told reporters on Tuesday he wouldn't include the NHS in trade talks even if it was "handed on a silver platter." Prime Minister Johnson has distanced himself from Trump during the president's London trip, fearing it would jeopardize his success in the upcoming general election, due to be held on December 12. Pollsters are predicting Johnson to win.

"It's best when you have close friends and allies like the US and the UK … for neither side to be involved in other's election campaigns," Johnson told LBC radio last week.

According to Politico's London Playbook, Johnson is "so keen not to be photographed with the US president that he did not even greet him at the door when he and wife Melania arrived" at 10 Downing Street on Tuesday night.

Maitlis is considered the UK's most ferocious broadcaster. She conducted the infamous November interview where Prince Andrew was grilled about his friendship with disgraced financier Jeffrey Epstein, which resulted in the royal being ditched by multiple businesses and being relieved of all his public duties for the foreseeable future. On the first day of the NATO summit, Trump was publicly fact-checked by French President Emmanuel Macron, and appeared to be the butt of a joke between Macron, Johnson, and Canadian Prime Minister Trudeau that was caught on camera.