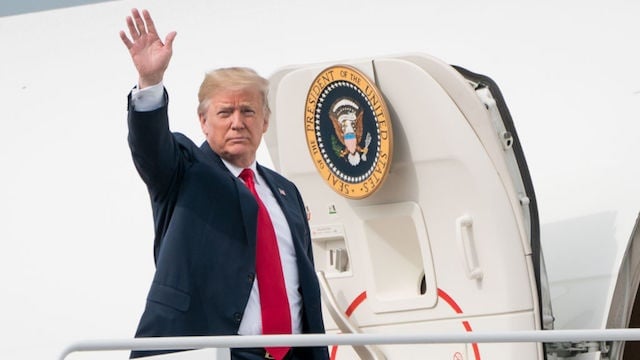 In a letter to Kim, US President Donald Trump wrote, "I feel it is inappropriate, at this time, to have this long-planned meeting."

Trump said he'd been looking forward to the summit, but the "tremendous anger and open hostility" in Kim's recent statements ultimately inspired the president to cancel the meeting.

"Sadly, based on the tremendous anger and open hostility displayed in your most recent statement, I feel it is inappropriate, at this time, to have this long planned meeting," Trump wrote in a statement. The cancellation, which dampens the emerging prospect of diffused high-stakes tensions between Washington and Pyongyang, sent investors running for save-haven assets, notably gold.

Earlier, in an interview with the "Fox & Friends" talk show on whether he would go through with the planned summit Trump gave noncommittal answers.

The summit, which would be a historic first meeting between a sitting US president and a North Korean leader, had been on the rocks. Pyongyang had produced harsh statements bashing Trump administration officials and South Korea.

See also: Trump could win the Nobel Peace Prize for his work on North Korea — if Norway lets him

But on Thursday, North Korea appeared to destroy parts of its nuclear testing site before a crowd of foreign journalists in an apparent show of goodwill.

Journalists from US, UK, Russian, Chinese, and South Korean news outlets travelled to North Korea to cover the event that took place on Thursday – and were still there when Trump cancelled the summit.

"Being inside this country just hours after they blew up a nuclear site... it's very awkward and uncomfortable moment right now," said CNN's Will Ripley, who is in North Korea.

North Korea is known to detain US citizens for thin reasons and sentence them to hard labour. Most recently, a college student was sentenced to hard labour for attempting to take a poster from a hotel. The student was eventually returned to his parents in the US in a coma, and he died days after coming home.

The demolition of the nuclear site did not rise to the level of the verifiable, irreversible denuclearisation that Trump has previously insisted on, since North Korea could simply rebuild the site.

Trump and his top officials have long insisted that North Korea give up its nuclear weapons before the US eases up on economic sanctions and military pressure, but Trump acknowledged on Thursday that those demands may not be met.

See also: Kim Jong Un went off script during his meeting in South Korea — and that could have big implications for Donald Trump

Asked whether he would be OK with a "phased in" approach to denuclearising North Korea, Trump showed flexibility where before there had been none.

"I’d like to have it done immediately," Trump said. "But you know physically, a phase-in may be a little bit necessary, we will have to do a rapid phase-in, but I'd like to see it done at one time."

Trump's comments came a day after a North Korean official threatened the US with a "nuclear-to-nuclear showdown" and suggested Pyongyang could "make the US taste an appalling tragedy" if things didn't go its way.

Though North Korea opened 2018 with many peaceful overtures and steps, it has recently taken a harsh turn toward criticising US and South Korean actions and statements. It has also repeatedly threatened to withdraw from the coming summit.

Trump had heralded his success in bringing North Korea to the table. But on Wednesday North Korea suggested it was Trump, not Kim, who had pushed for the summit.

While a staggered approach to denuclearising North Korea seems more realistic to experts who don't expect Pyongyang to unilaterally disarm, it's the same track taken by four successive US presidents that Trump has promised not to repeat.