Virgin Galactic was under pressure on Tuesday, falling as much as 8% following the successful launch of Blue Origin's rocket, which briefly carried Jeff Bezos and others into space.

Amazon founder Bezos, his brother Mark, Wally Funk, and Oliver Daemen were launched about 106 kilometres above the earth, surpassing the Karman line, which is recognised by many as the boundary between earth and space. The space flight lasted only a few minutes before the crew successfully landed at Blue Origin's facilities in Texas.

The Tuesday launch came about a week after Virgin Galactic launched its founder Richard Branson 85 kilometres above earth. There has been debate as to where space officially begins, but the occupants of both launches briefly experienced zero gravity.

While shares of Virgin Galactic experienced a brief pop to the $50 (R725) level leading up to its July 11 space launch, shares have since fallen 40%. Virgin Galactic launched a $500 million share offering after its successful launch of Branson and three other crew members.

The space race is officially on, as Virgin Galactic competes with both SpaceX and Blue Origin. While Virgin Galactic has ambitions to launch tourists into space for upwards of $250,000 (R3.6 million), it also plans to compete against SpaceX and Blue Origin in launching satellites and NASA payloads into space to further develop outer space industries. 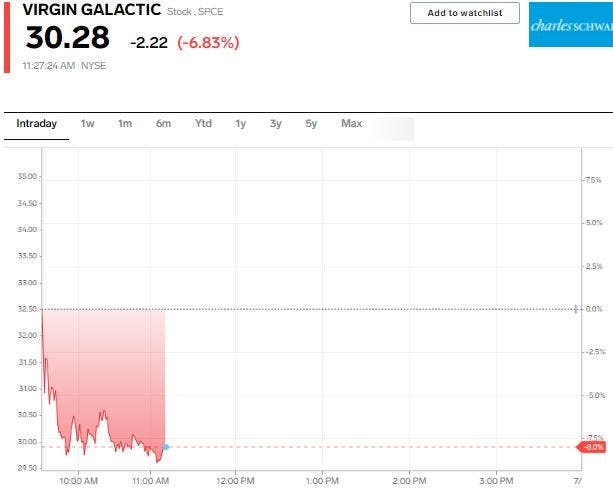