UK students are trapped in their dorms, as universities scramble to prevent Covid-19 outbreaks A sign at Murano Street Student Village in Glasgow, where students are being told to stay in their dorms.
Andrew Milligan/PA Images via Getty Images

New university students in the UK say they are being prevented from leaving their dorms and threatened with fines as part of heavy-handed attempts by authorities to prevent Covid-19 spreading on campus.

Outbreaks of varying sizes have been recorded at student accommodations at universities in large UK cities, including Glasgow, Manchester, Belfast, and Edinburgh.

Some have resulted in lockdowns, with students told to stay in theirs rooms until testing is complete.

The pandemic has turned the traditional beginning of university — usually a blur of parties, introductions, and other social activities — into a nightmare.

In several cases, students say they are being kept against their will inside their accommodation, and threatened with expulsion or fines for breaking the rules.

Dominic Waddell, a first-year filmmaking student at Manchester Metropolitan University, told The Associated Press: "There was a security guard that just arrived at the gate of our accommodation and he wasn't letting anybody leave, not really explaining what was going on."

Another first-year at the university, Joe Byrne, told the BBC: "We have had no warning, support or advice from the university about how we get food et cetera, and instead have been left completely in the dark and practically locked up against our will." 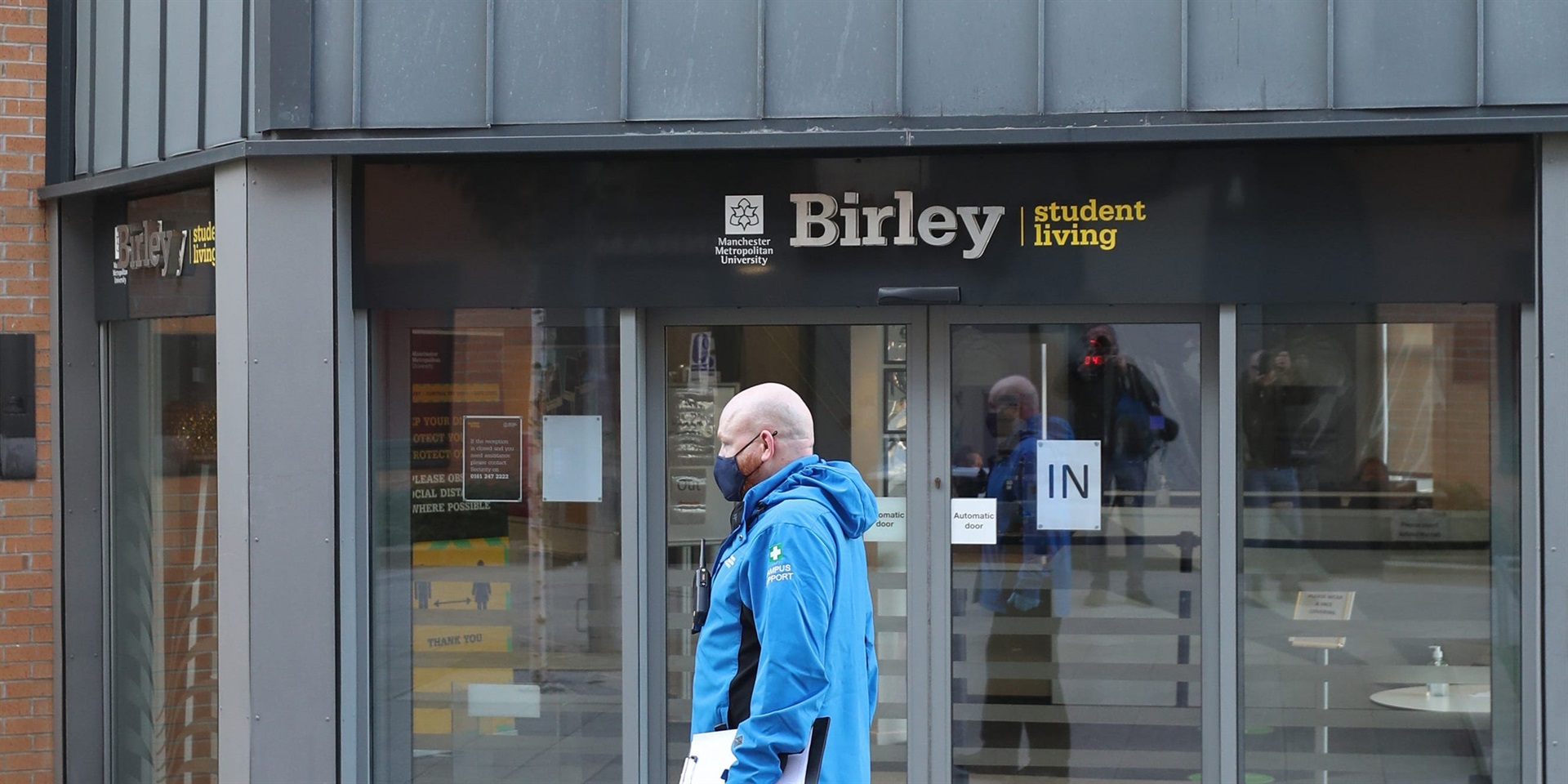 A man outside the Birley campus, where hundreds of students have been told to self-isolate, in Manchester.
Peter Byrne/PA Images via Getty Images

On Monday, the University of Aberdeen said that students who visit other students in their dorms were breaking government regulations on multi-household meetings.

The university said students will face "robust action" if they break the rules, including "a fine of up to £250 as well as the potential for further actions — including suspension and/or expulsion."

On Wednesday, The Scotsman newspaper reported that several students had already been fined.

On government advice, universities in Scotland told students on September 24 that they must "not to go to bars or other hospitality venues" and not socialize with those living in other accommodations.

Bars and restaurants are still open across the UK for the general population, though with enhanced restrictions and a curfew of 22:00.

On Friday night, police broke up several parties at the main accommodation complex at the University of Edinburgh. "There's always police here now. It feels like we're being watched 24-7 which is a bit scary," a first-year student living at Pollock Halls told the BBC. "There's been people patrolling to make sure that no-one's leaving."

On Friday, two accommodation blocks at the Manchester Metropolitan University were locked down after 127 students tested positive for the coronavirus.

Days before, a 100-person party was broken up in a courtyard at one of the halls of residence.

A parent of a student currently in self-isolation at an accommodations block run by the University of Glasgow told the Guardian that the school had left isolating students to fend for themselves.

"When they had to ring and ask what they should do about food and laundry they were told to wash their clothes in their bathtub and that they would have to sort their own supermarket food delivery, it took them three days to get a slot," the woman said.

"There is no welfare support, mental health support, daily check-in to see if they are OK and need anything."

On Friday, The University of Bristol said that a maximum fine of £800 will be issued to anyone who breaks social distancing rules in accommodations blocks.

On Monday, a number of students at Queen's University, in Belfast, Northern Ireland, were told to self-isolate after an outbreak, the BBC reported.

The week before classes start at UK universities, usually in late September, is known as "Freshers Week," a time when students drink and socialise voraciously and acclimate themselves with their new city or campus homes.