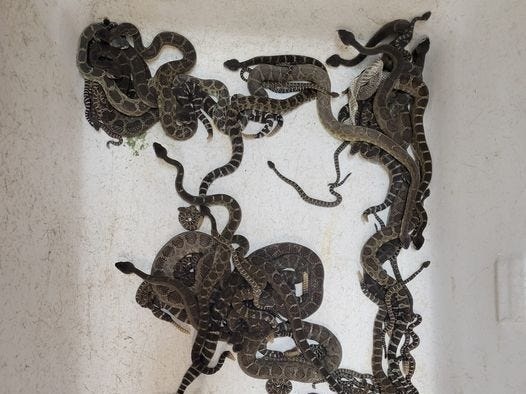 Alan Wolf, the director of the Sonoma County Reptile Rescue, said he found a mass of rattlesnakes of varying sizes living under a woman's California home.
Alan Wolf/Facebook

A California woman was faced with the stuff of nightmares when a reptile rescue found a writhing mass of close to 90 rattlesnakes under her home.

According to Alan Wolf, the director of the Sonoma County Reptile Rescue in California, he got a call from a local woman last week who suspected that she had snakes living under her house.

"Three hours and 45 minutes later, this is what I came out with," Wolf said in a post on October 10 on Crotalus, a public Facebook group for rattlesnake fans that has around 14,800 members.

He said the snakes were northern Pacific rattlesnakes. As per Seattle's Burke Museum, female snakes of this species often gather in single dens to give birth, with each snake birthing four to 21 live baby snakes from August to October. The rattlesnakes, which grow to around 36 inches long, kill and eat small mammals, amphibians, reptiles, and ground-nesting birds.

Wolf did not name the woman nor provide the exact location of her home, but detailed the process of removing the snakes from under her house.

"I've gone back twice and gotten seven more (snakes), but there'll still be more there," Wolf wrote in a reply to a comment on his post. "They built their foundation around the rocks. I'm very aware that they can come and go as they please, but I'm just giving them a new home somewhere else."

Wolf said in separate comments on his post on the Crotalus Facebook page that he had relocated well over 100 rattlesnakes in the last week and that he handles more than 1,000 rattlesnakes per year. He did not immediately respond to a request for comment from Insider on where the 90 rattlesnakes were relocated to.

If bitten by a northern Pacific rattlesnake, one is advised to seek medical attention with a suitable antivenom.