An artist's depiction of a meteor in the sky above Tall el-Hammam, an ancient Middle Eastern city in present-day Jordan.
Allen West and Jennifer Rice

About 3,600 years ago, residents of the city of Tall el-Hammam started their days like any other. A guard likely sat on the parapet atop the local palace.

Then, to the southwest, an object fell through the sky.

"All of a sudden, this thing explodes in a sudden burst of light," researcher Malcolm LeCompte told Insider. "The guard's instantly blinded. He's done."

The heat from the explosion melted the bricks beneath the guard. A shockwave followed, which sheared off the top 12 metres of the palace roof and, presumably, liquefied his insides.

That explosion, according to a study LeCompte co-authored last month, was a 50-metre-wide meteor that blew up before hitting the ground, annihilating the city. The blast killed at least 8,000 people and animals.

"It was essentially a mini-sun," LeCompte said. "And if the heat didn't kill you, the shockwave would've be sufficient to basically tear you apart and turn you into nothing but a bag of bones or goo."

He and his colleagues think the saga of Tall el-Hammam could have inspired the biblical tale of Sodom. The disaster bears an uncanny resemblance to Moses' account in the book of Genesis, in which he warns against acts of wickedness by describing a city and its sinful people that God destroyed in a firestorm.

Archaeologists already knew that Tall el-Hammam, located in a valley in present-day Jordan, was suddenly abandoned millennia ago and remained uninhabited for centuries. Yet the reason for its demise remained up for debate - some historians suggested a natural disaster or violent war. But the new research, a culmination of 15 years of excavation, reveals that the city and its residents were subject to extreme temperatures and pressures.

LeCompte, who researches meteors and their impacts at Elizabeth City State University, said the only thing that can explain it is an extraterrestrial impact.

"An earthquake couldn't do that," he said. But then they started finding evidence that things had gotten really hot, really fast - like a rock that had melted to black on all sides, remnants of melted pottery and metal, and glass that had liquefied and splattered onto fragments of human bones.

"The technology didn't exist at that time, in the Middle Bronze Age, for people to be able to generate fires of that kind of temperature," Sid Mitra, a geologist from East Carolina University who coauthored the study, said in a press release.

Thinking a space rock could be the explanation, excavators called in LeCompte and other members of his international Comet Research Group in 2014. Over the next seven years, LeCompte visited the site three times to collect samples. Multiple findings by his team confirmed that a cosmic airburst had happened near the city.

In a layer of sediment dating back 3,600 years, the group found fractured sand grains - known as shocked quartz - which only form at very high pressures. Those pressures had also converted wood and plants in the city into microscopic diamonoids that are almost indestructible.

The sediment layer also contained platinum, iridium, and osmium - some of the rarest elements on Earth, which often come from meteorites.

People in the area were blinded, deafened, or smushed Researchers stand near the ruins of ancient walls in Tall el-Hammam.
Phil Silvia

Yet another indication that a meteor was responsible is that city buildings, including the palace, all fell toward the northeast.

This suggests the space rock exploded to the southeast of the city, and the resulting shockwave traveled north.

Meteors that explode in the atmosphere before striking Earth's surface are called bolides. Their cosmic airbursts can be more powerful than a nuclear bomb. The explosion above Tall el-Hammam, LeCompte said, had a yield between 5 and 30 megatons - at least 330 times more powerful than the atomic bomb that destroyed Hiroshima.

The air temperature rose to 2,000 degrees Celsius. Those who looked at the incoming meteor lost their sight.

"More than likely, everything that was burnable would've caught fire, like wood and clothes," LeCompte said. "If you were on a hillside looking down into the valley, the sound of the explosion might've broken your ear drums."

Then came the shockwave, which would have felt like an intense wind barreling in at 1,200 kilometres per hour.

"The shock that would pass through your body would make mush out of your insides," LeCompte said.

He added that the pressure from the wind would have been 100,000 times what we normally feel. 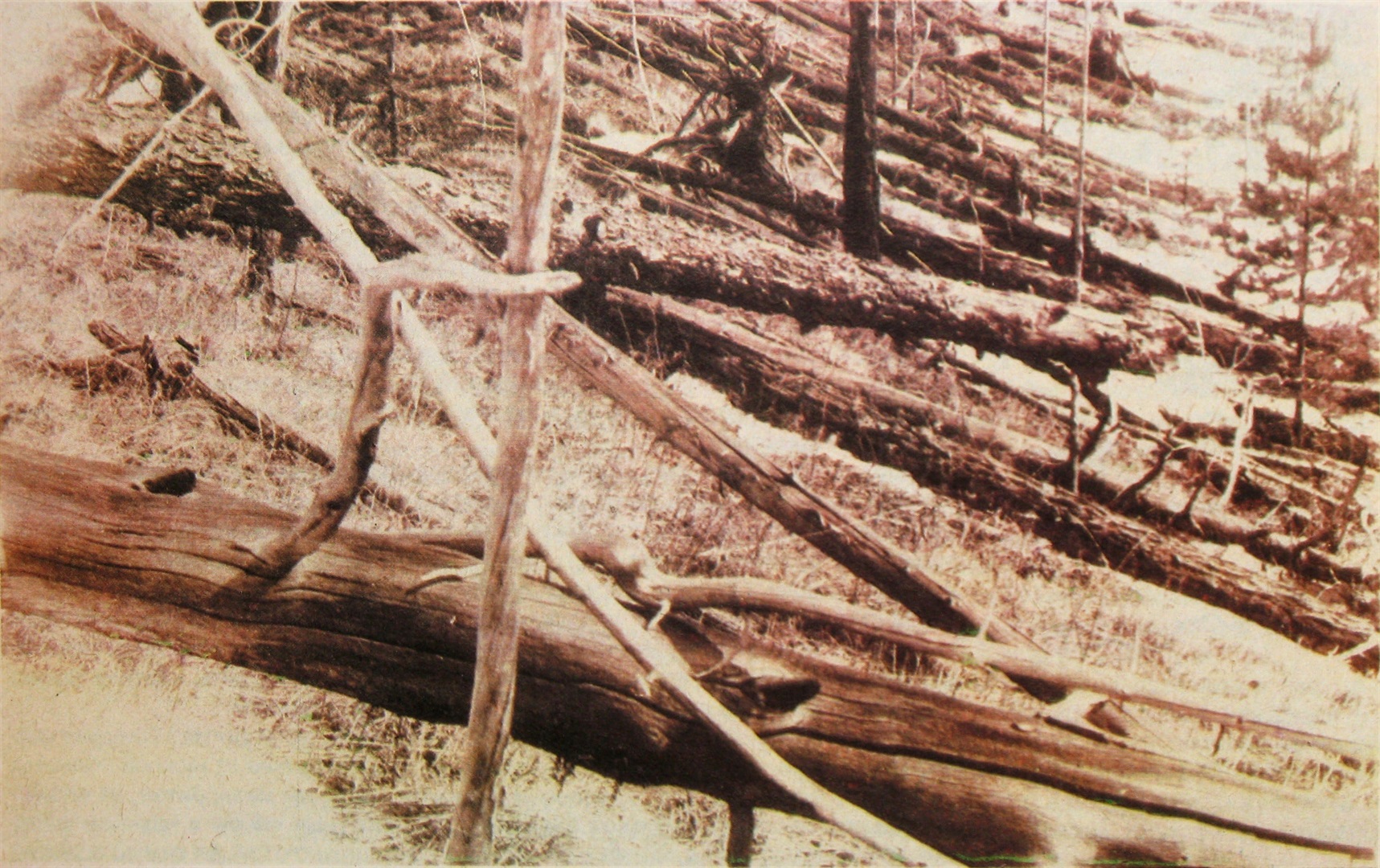 Fallen trees at Tunguska, Russia, 10 miles from the epicenter of a cosmic airburst that occurred in 1908.
N. A. Setrukov, 1928/European Space Agency/Flickr
Indeed, in Tall el-Hammam archaeologists unearthed bodies that were missing legs and skulls. Some victims had been blown against the walls of rooms and buried under rubble. Many of the people likely died without knowing what had happened, LeCompte said, incinerated by the blast.

The study suggests that the explosion was similar to that of a bolide over Russia more than a century ago. That event resulted in minimal human casualties due to its remote location in Sibera, but knocked down 80 million trees.

In the Sodom story, God leaves nothing alive - wiping out even "that which grew upon the ground."

The researchers' findings also offer an explanation for that line: They observed a high concentration of salt in the sediment layer, which would have been toxic to crops. The city of Tall el-Hammam is located about seven miles northeast of the Dead Sea in what is now Jordan.
NASA

If the meteor exploded southwest of Tall el-Hammam, it may have vaporised or splashed water from the nearby Dead Sea into the surrounding soil.

Historical records show that this area of the Middle East was abandoned for up to 600 years following the disaster - which would have been the only option if salty soil had made agriculture impossible.