Killing of terrorist behind death of 4 US troops sheds light on France's quiet, intense fight in Africa In August, a French counterterrorism operation in northern Mali killed the leader of the Islamic State in the Greater Sahara (ISGS), avenging four US troops who were killed in Niger in 2017.

The elimination of such a high-value target highlights the quiet but intense war being waged in Africa against terrorist groups. Several European countries the US have contributed to the fight, but it's France that has taken the lead. Africa has developed several terrorism hotspots. Boko Haram in West Africa, al-Shabaab in East Africa, ISGS in the Sahel, and other ISIS- and Al Qaeda-affiliated groups in North Africa have killed hundreds and displaced thousands.

France's involvement in the Sahel dates to 2012, when Islamist militants surprised the world by nearly capturing all of Mali in a swift campaign.

France deployed more than 5,000 troops to the region in a mission called Operation Barkhane and managed to defeat the jihadists, who regrouped and launched an insurgency.

The ISGS and other terrorist organizations use the area to conduct attacks in the region but also to train individuals to attack Western countries. The terrain - desert and forest - makes policing the region extremely tough.

"It is a tough environment. Very large distances with very few people. The terrorists are very mobile and use Toyotas [with mounted guns] and motorcycles to move. The days are long and we seldomly [sic] find the terrorists. But when we do find them, we destroy them," a French Foreign Legion paratrooper with multiple combat deployments to Africa told Insider. The paratrooper and others spoke anonymously in order to describe their operations. 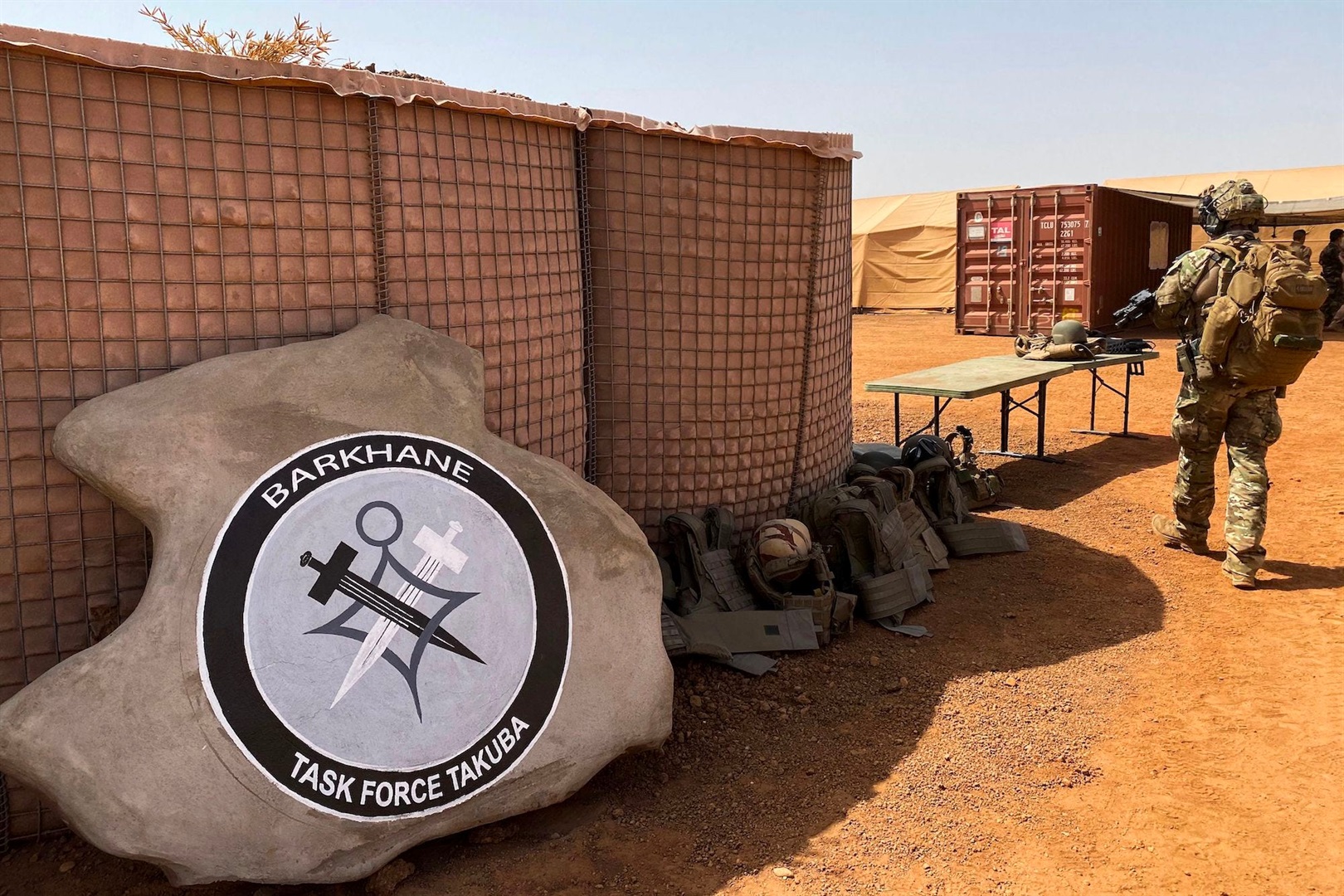 The logo for Task Force Takuba at a military base in Menaka, Mali, November 3, 2020.
DAPHNE BENOIT/AFP via Getty Images

Because of its deep ties to the Sahel countries, many of which were French colonies, France has taken the lead in combating terrorism in the region.

In addition to deploying conventional troops, Paris has launched an international special-operations unit, Task Force Takuba, to combat terrorism there by both training local militaries and conducting strategic reconnaissance missions and raids.

Several countries, including Ireland, Sweden, Norway, and the UK, have committed commandos to the task force. The US has also joined, deploying Navy SEALs and Army Special Forces operators to the region to train and advise local militaries and conduct their own operations.

One such operation in October 2017 went tragically wrong. A group of US and Nigerien soldiers returning to their base were ambushed by ISGS fighters. Five Nigerien soldiers, two US Green Berets, and two US troops providing direct support were killed.

Al-Sahrawi's killing nearly five years later shows how France and its partners have kept up the fight. While the US-French relationship has sometimes been tense - the most recent spat coming after the US-UK-Australia defense agreement scuttled a French submarine deal with Canberra - cooperation between Washington and Paris has been extremely valuable, especially in Africa.

"We work together for one goal. We have the soldiers in Africa, but they have the technology. So we support each other. It is a nice relationship, and it is good to have them by our side," the legionnaire added.

Intelligence is probably the most important element for conducting operations in an area as vast as the Sahel.

Finding an individual or small groups of militants on their own is nigh impossible in such an expanse, making intelligence critical to finding and hitting their training camps or bases. Special-operations troops are key to attaining human intelligence. They conduct raids and capture terrorists who can yield more information to enable more raids. Reports suggest that the French killed al-Sahrawi based on intelligence provided by captured jihadists.

"The French are a great ally. We work with them regularly in joint operations" in Africa, a Special Forces operator assigned to an Army National Guard unit told Insider.

The French "know their stuff and are pretty relentless, and they have a good reason to be. In the past six or seven years, hundreds of their civilians have been killed by Islamist terrorists," the operator said.

French forces "have a strong connection with the area and can operate much more lucidly than us sometimes. They know the culture, history, and language. It's been privilege fighting alongside them," the Green Beret added.

That cooperation in Africa may be coming to an end, however. This summer, Macron announced that France would reduce its military presence in the Sahel considerably, cutting 2,500 to 3,000 troops from the 5,000 deployed there. French soldiers play cards as they make camp in Mali's Gourma region, ahead of the start of the French-led Operation Barkhane, March 26, 2019.
DAPHNE BENOIT/AFP via Getty Images

Some local partners have followed suit, deciding to shrink their own military presence. Chad cut its counterterrorism force in the region in half.

The US has also decreased its military footprint in Africa, but US special-operations forces remain in high demand in the region.

When an ISIS offshoot threatened to destabilize Mozambique, the government there turned to the US and its special-operations forces for counterterrorism assistance.

While counterterrorism efforts by the US and its partners in the Middle East have often received the most attention and resources, ISIS and Al Qaeda, their affiliates, and other groups continue to pose an equally serious threat, if not a greater one, to African countries.