Airbnb is no longer the domain of budget room rentals in mid-level homes and apartments. The room, apartment and home rental platform now hosts some of the country's most exclusive private residences that you can - in most cases - rent directly from the owner.

Although it's still possible to rent a fairly decent room, apartment, or home in South Africa for under R1,000 per night, there are a surprising number of homes, villas, penthouses, and sprawling estates that go for well over R100,000 per night - many with two- or three-night minimum stays. And with wealthy international tourists still unable to easily travel to South Africa given Covid-19 restrictions, some of the country's most exclusive game lodges now allow you to book their properties directly on the platform - though some come with hefty fees you might be able to avoid if you book direct.

Unsurprisingly, the Western Cape has the highest number of homes on the platform that fetch over R100,000 per night - there are at least 14 listings that meet this requirement, mostly along the Atlantic Seaboard.

More surprising are the provinces that now top the list. North West, Northern Cape, and Limpopo all of which have lavish properties listed on Airbnb that cost roughly R200,000 per night - and some of which have a two- or three-night minimum stay.

Here are the most expensive properties currently listed on Airbnb in each province: Gauteng's high-end Airbnb rental market is significantly cheaper than that of the Western Cape's. A one night stay in the Houghton Hotel penthouse costs around R55,000 per night and is about as pricey as it gets for a mid-year stay in the province. For this, you'll get "all the mod-cons", including a splash pool, butler, security, and views of a Jack Nicklaus golf course and Joburg's skyline. The penthouse has four bedrooms that can sleep up to eight guests. This three-roomed lodge at Jock Safari Lodge in the Kruger National Park is among the most expensive Airbnb rentals in Mpumalanga. The home has a minimum two-night stay at just under R60,000 per night, which together with the service fee puts the cheapest stay here at around R140,000. For this, six guests can appreciate a variety of high-end private game lodge facilities such as swimming pools and decks with views over the surrounding bush. 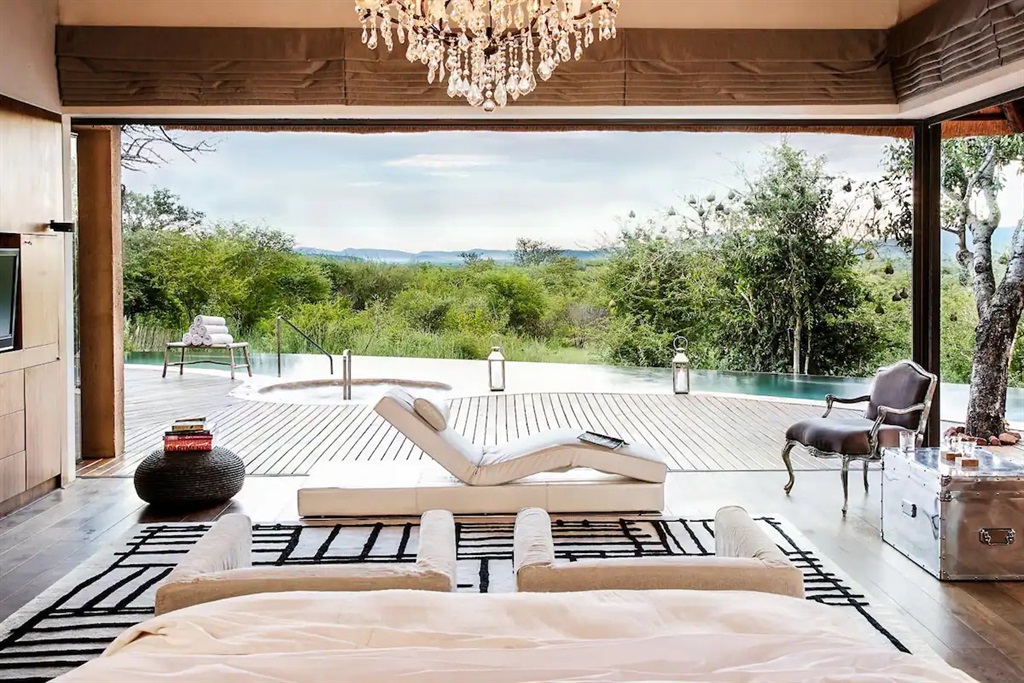 Molori Safari Lodge in Madikwe costs a staggering R210,000 per night - and that's before you've added the R94,500 surcharge for "occupancy taxes and fees" for the minimum three-night stay. This puts the cheapest possible stay at the lodge at around R724,500, or R241,000 per night. The lodge has seven bedrooms that can sleep a total of 14 guests. Molori has appeared not to have spared any expenses in the design of the lodge. According to the property description, "rich hardwood heated floors and smooth boarded decks lead the eye from indoors to out, to a mirror-calm infinity pool which will entice you for a lantern-lit dip." The property also comes with access to gourmet chefs, a gym, sauna and hot tub, as well as access to game drives in the surrounding reserve. Tarkuni Villa is located in the popular Tswalu Private Game Reserve. At just under R200,000 per night for up to 10 guests, and a two-night minimum stay, it's comfortably the most expensive property in the Northern Cape. According to Tswalu, Tarkuni Villa is "a truly elegant jungle home" that "mixes chandelier lighting and state of the art tech features with rugged exposed wood, natural stone, and a free-flowing open-air environment". If you can tear yourself away from the terrace, guided safaris and bush walks are included in the price. A helicopter flip to the top of a local mountain for a picnic lunch is, however, not. Three luxury villas at Cheetah Plains, in the Sabi Sands Game Reserve, are among the most expensive Airbnb rentals in South Africa. Each currently costs R225,400 per night for up to eight people, and have a three-night minimum stay that will push the total minimum bill up above R600,000. The lodges also have additional fees of between R2,224 and R4,432. Features at individual lodges differ, but include the likes of heated pools, double rain showers, private chefs, outdoor bomas, and indulgences like manicures and massages. Guides are also on hand to take guests for regular game drives in electric vehicles that are equipped with heated seats.

Cape Town has at least ten homes available for rent that'll cost you more than R100,000 per night - even in the city's offseason. But the five-bedroom "villa" called 19 on Clifton is among the most expensive, at an eye-watering R177,889 per night. You'll also need to factor in the property's five-night minimum stay, which pushes your total minimum bill up to R889,446. According to the description, the home is a "French-inspired seaside villa, decorated with light wood tones, elegant marble, and floor-to-ceiling windows wherever possible". There's also a farmhouse kitchen, swimming pool, hot tub, home cinema room, wet bar, wine cellar, poker table, two formal dining areas, and a private chef. The Free State is devoid of rentals with costs that rival those of its neighbouring provinces. Although a few villas along the Vaal hover around the R10,000 per night mark, it's this 16-person guest house in Bloem that appears to be the priciest vacation rental in the province. The seven bedrooms have a total of 22 beds and share three bathrooms. According to the description, it's a property "styled to the comfort and taste of those who enjoy majestic surroundings". The guest house allows pets and smoking, and includes access to the garden and an outside braai.

This villa in KwaZulu-Natal can sleep up to 13 guests in four bedrooms, and promises guests a "prime location with magnificent breaker, ocean and forest views". Its two-night minimum means that the cheapest stay here will cost just over R105,000. For that, guests get direct access to the beach and lagoon, as well as several other activities included at the golf estate including canoeing, fishing, tennis, squash, and golf. The most expensive Airbnb stay in the Eastern Cape is in Shamwari Private Game Reserve. Sarili Private Lodge costs R71,400 per night - with a two-night minimum stay - and claims to offer "a private oasis for families, groups and friends". According to the description the lodge has "majestic views of the Bushman's River and the grassy plains, but also offers supreme comfort, magnificent sunsets and a wildlife experience that you'll never forget". Included in the price are all meals, select local drinks, and guided game drives and bush walks.