A travel blogger proposed to his girlfriend at the top of an active volcano, and the video is as adorable as it is terrifying 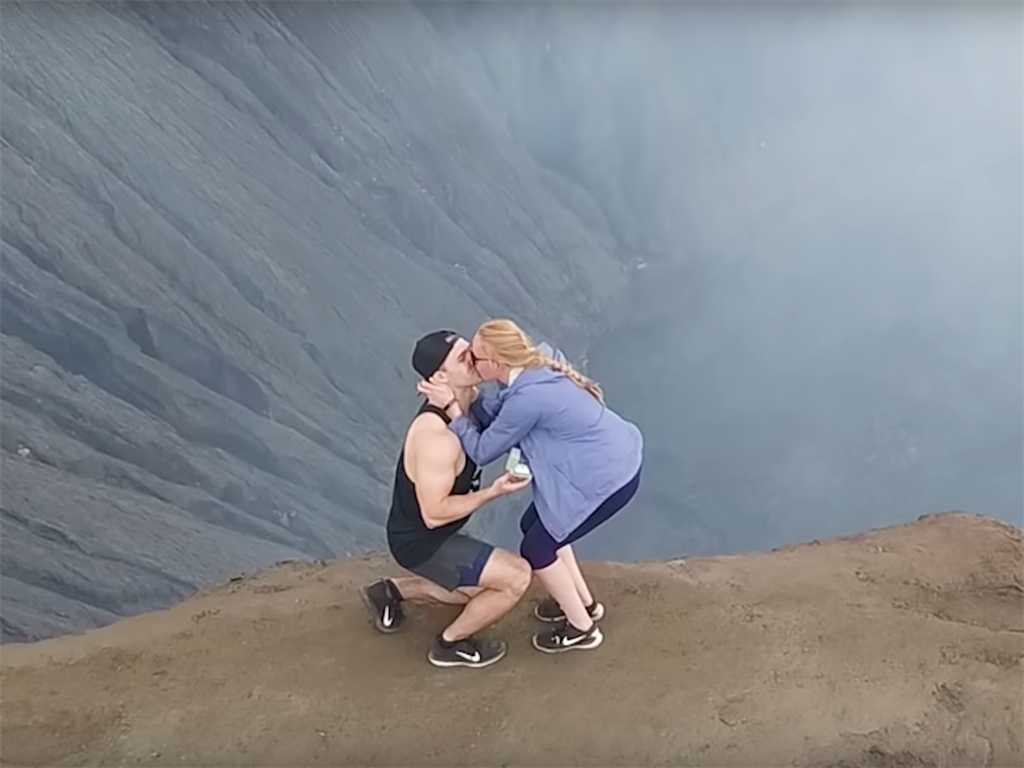 Getting engaged 2,100 metres above sea level.

A travel blogging couple got engaged on top of an active volcano - and the video of the occasion is as adorable as it is terrifying.

Jarod, who is one half of "Our Moving Roots," popped the question to Alison when they reached the top of Mount Bromo in Indonesia, which is 2,329 metres above sea-level.

"While walking atop the crater rim, hearing the deep rumble down below and stunning 360 landscape views, I got down on one knee and asked the love of my life to marry me," Jarod wrote in the video's caption. "She was so shocked and couldn't believe it was really happening."

Jarod told INSIDER he started planning the proposal almost six months beforehand. He knew he wanted to marry Alison, and wanted to ask her "somewhere amazing".

"After doing some Googling and seeing Mt. Bromo, I knew that had to be the place!" he said. "I told Alison I wanted a drone shot of us walking on the rim, but in reality I wanted a shot of the proposal."

The couple invited two friends with them on the trip, Stu and Jenny, and luckily Stu is a drone pilot, so he was able to capture the moment perfectly.

"I worked out what 'shots' I would like for the video and had a game plan with Jenny, Stu and myself," Jarod said. "We were only at Mt. Bromo for one day, so the weather had to be perfect, and it was! The entire day leading up to the proposal my heart was racing. I was so nervous that something would go wrong and we wouldn't be able to pull it off."

Read more: A travel-influencer couple has defended a 'terrifying' Instagram stunt that involved hanging off the edge of an infinity pool

Luckily, everything went smoothly, and Jarod was able to keep the proposal a surprise right up until the last minute.

"The best part of the entire thing was the pure shock on her face and joy in her eyes," he said. "I could tell she completely had no idea that was about to happen and it made the moment so much better."

Alison told INSIDER she was in disbelief when she saw the ring, asking Jarod "Oh my gosh. Is this real life?" followed by tears and an enthusiastic "Yes!"

"While we were hugging, I took a moment to take in where we were in the world at that moment and how special it was," she said. "I felt an overwhelming sense of happiness as well as adrenaline from being on top of a volcano and decided we needed to get down!"

Jarod added that about 10 minutes later, the sulfur smoke got so bad they had to get off the volcano anyway.

On their YouTube page, the newly-engaged couple describe themselves as "a fitness obsessed Canadian couple who love to travel and adventure".

"'Our Moving Roots' is the idea that in life we are not meant to be stagnant, but rather be in constant motion," they wrote. "Planting new roots in the places we go, the people we meet, the experiences we have, while infusing love in all of the above."

You can watch the full video below.

Related Links
11 mind-boggling geography facts
A hotel in Mexico is offering a Barbie-inspired room, and there’s a lot of pink involved
An Instagram travel couple with nearly 500,000 followers shared what their photos look like...
Next on Business Insider
Kissinger says Ukraine must give up land to Russia, warns West not to humiliate Putin