I took a R289, 4-day train ride between Zambia and Tanzania, and even though it was delayed by an entire day, I'd do it again The TAZARA is a local passenger train that goes from Zambia to Tanzania - and is supposed to be one of the world's most scenic train rides, according to The Guardian, offering a chance to see some of Africa's famous wildlife, like elephants, zebras, lions, giraffes, and more as it travels for days. The BBC reported that it was like going "back to train travel of a bygone era."

I recently traveled on the train. Though in many ways the journey was what I hoped it would be, it also turned out to be far more unexpected than I was anticipating. It was far more luxurious (meals could be ordered and brought to the cabin, for example), but also took a fair bit longer than I thought the journey would.

Here's what it was like to spend several days on board for the price of a pair of movie tickets:

There was no line at the station in Kapiri Mposhi, Zambia. My first-class ticket cost $20 (R289) — and looked like something you'd get at a raffle.

You can reserve tickets by phone in advance, but I was able to walk right up to the window and buy a ticket easily. For about 300 kwacha (the currency of Zambia) in cash, or about $20 (R289), I was able to get a bunk on what I was told was the "best" first-class carriage.

After a delay of two hours that was not explained, we were finally able to board. 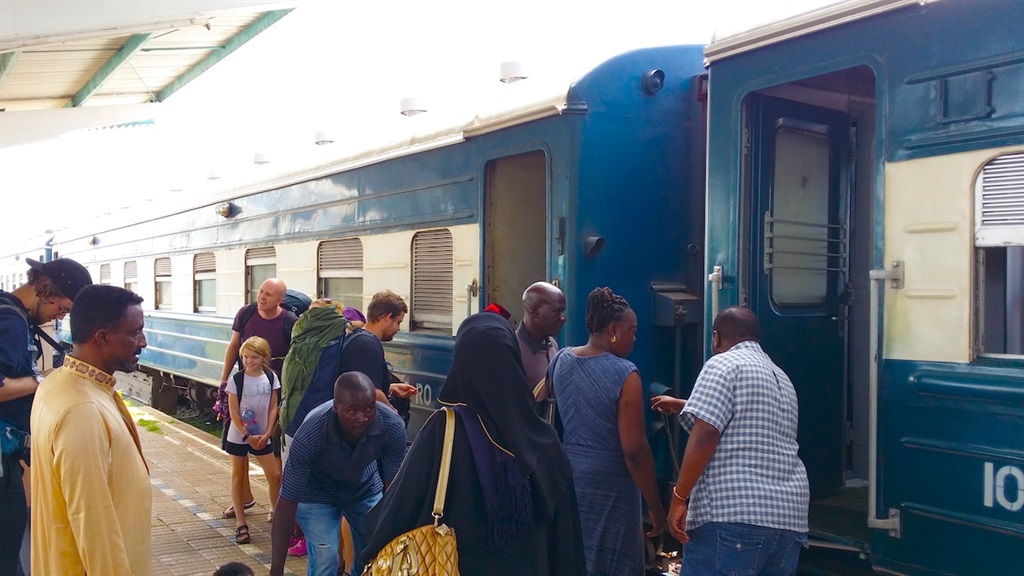 There was not much to do at the station. The only restaurant was closed, and there was no WiFi - so the two-hour delay felt even longer. Showing my ticket, a uniformed man led me through the crowds directly to my cabin. "Enjoy the adventure," he said with a smile.

My cabin was more luxurious than I expected, even though it was small and there were four of us in it. The cabin had four bunks, a small table, and storage space above the door and under two of the bunks. Each bunk also had a pillow and bright-coloured, thick blanket with "TAZARA" emblazed across it in thick black letters. My lower-right bunk was comfortable to sit on - a good thing, since that's where I was going to be spending a lot of time for the next few days.

In the cabin with me were Edwardo and his uncle Venango, who were going to Dar es Salaam for a holiday, and Yves, an NGO worker from Halle, Germany on his way to a seminar on the island of Zanzibar. We all got on well - none of us kept each other up at night.

Most of the first-class area was quite nice, like the washroom, which had semi-warm water. I was surprised the sinks were metal - and that they remained fairly clean throughout the whole journey, even though I never saw anyone cleaning them.

The electricity also often stopped working, sometimes for hours at a time. I had to be conservative when I turned my phone on to take pictures - and I was glad I brought several books for entertainment.

The toilets, however, were not. The first-class toilet was essentially a hole in the floor. Using the restroom while the train moved was interesting.

The train also had a bar/snack stand, where you could buy things like bottled water for about 40 cents (R6). Besides bottled water, there were also bananas for 40 cents (R6) each - considered expensive for the region. But a bag of popcorn was just 65 cents (R10). It was all cash only.

The lounge was usually quite full. The lounge's turquoise couches felt plastic-y, and weren't as soft as my bed. But they were softer than many third-class seats - which was probably why most people I met there said they came from third class.

The onboard restaurant was also often busy. While some people were ordering food, a lot of people in the restaurant were just sitting and talking. Even though there were fans on the ceilings, I never saw them working.

Meals could also be ordered and brought to the cabin, and were quite affordable at about $2 (R30) for a full-course dinner. For dinner, the choices were chicken, a beef stew, or fish. Breakfast consisted of eggs, four slices of bread with a small scraping of butter, coffee or tea, and also cold spaghetti. It also cost just $2 (R30).

Alternatively, food could be purchased at any of the dozens of stops along the way, from friendly locals who would walk right up to the train. "Ndizi!" the women balancing enormous plates and bowls on their heads would shout in Swahili, meaning they were selling fresh bananas. "Maembe!" others would say, meaning they were selling very ripe mangos. You could usually buy a bunch for about 40 cents (R6) by simply passing money through the window - and it was really quite something to see the women walk around, balancing everything perfectly on their heads without using their hands or having to walk slowly.

The train was maybe the bumpiest I'd been on. But the bed was comfy enough that I slept soundly — with the covers over my head in case of mosquitos. There were not many mosquitos, but enough other buzzing insects that they could be annoying at times. The thick bedsheets were surprisingly breathable, and although the pillow was fairly lumpy, it served its purpose, too.

The second and third class cabins were not as nice. Most people in second and third class were only traveling from one village or town to another, and not the whole way to Dar es Salaam. The seats were hard, and space was pretty cramped - I wouldn't want to be sitting there for several days.

The back of the train was simply left open. It would have been more dangerous, were it not for a large sign with a skull. You could just walk right off the back of the train if you weren't paying attention - which was probably why the sign was there in the first place. A popular spot for people to go to smoke, it's also where a priest hung out with his pet goat during the journey.

While our constant movement kept mosquitos away, there were other bugs — some of which were the largest I'd ever seen. The dragonfly-looking insect that flew in through the open window for breakfast one morning was so large, I thought it was a bird at first. It flew around the cabin for a whole day, buzzing as loud as an entire swarm of bees.

We traveled with the windows open, since it was warm and there was no air conditioning. The green scenery was just as spectacular as I hoped. The fans in our cabin were broken, so keeping windows open was the only way to let in cool air. Since there were frequent heavy rains, it meant the air also smelled incredibly fresh.

But it was the brightly-coloured villages and towns we stopped in that were truly exciting. 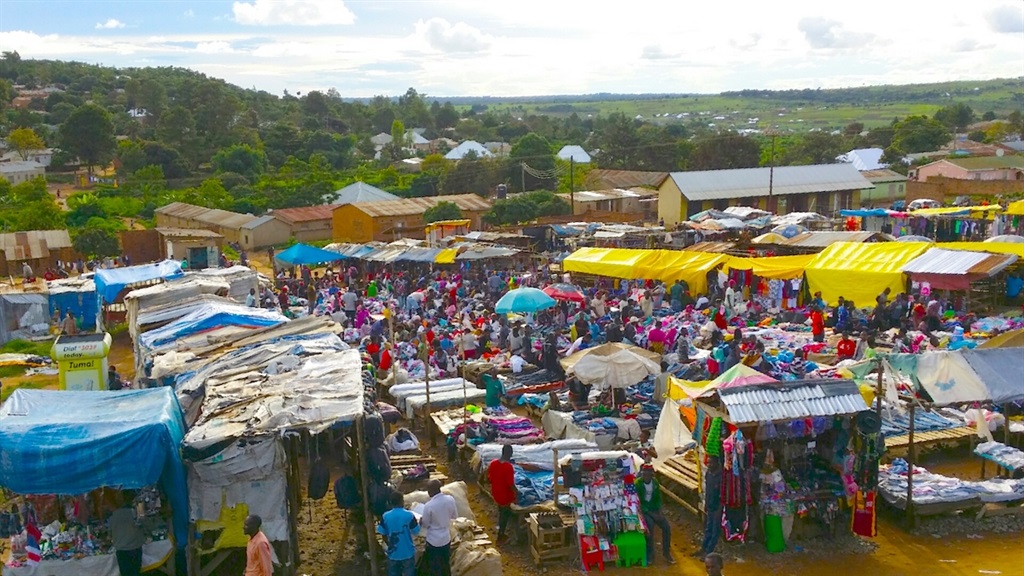 Dozens, and sometimes hundreds, of people milled about whenever the train pulled in somewhere. Each place had something different to see - while some of the stops were little more than a collection of huts, others had large, vibrant marketplaces. I did not want to pay the fee. But I had to, they told me, or I would be arrested. I didn't have any US dollars - only Zambian kwacha, Tanzanian shillings, and British pounds. Fortunately, my cabin-mate Yves had dollars, which I was able to exchange for pounds.

Sometimes we'd stop in towns and villages for an hour or more. And we stopped in a lot, lengthening the amount of time we were delayed. Eventually, word got around the train we'd be at least a day late in getting to Dar es Salaam. I was glad I didn't have a flight to catch until a few days after we were originally scheduled to arrive.

By the third and fourth days, the scenery was still incredible, but felt slightly repetitive —and so did the food, which was the same at each meal. One of the highlights of the TAZARA is supposed to be passing through wildlife parks. Unfortunately, because of all the delays, it was dark when we did - meaning there were no animals to see. I had to content myself with watching the continually unfolding green forests and fields, and the thunderstorms that rolled through every few hours.

By the time we got to Dar es Salaam, on the Tanzanian coast, I was ready for something new. Our journey was supposed to take three days and two nights. But because of so many delays, it ended up taking four days and three nights. Stepping off the train around 09:00. and getting lost in the enormous crowd, it felt weird to be back on ground that was not moving.

But for the price, and what I was able to experience, I'd do it again. The journey had been the longest single train ride I'd ever been on. Even though it took several days, it had been an adventure - a rather affordable one. The only things I'd do differently next time: bring more bottled water and some portable phone chargers, since photo-taking drains battery life rather quickly.

Related Links
A storm helped a BA plane from NY to London smash the record for the fastest-ever transatlantic...
Swarms of locusts forced Somalia to declare a national emergency.
Syria accidentally fired a missile at a civilian jet carrying 172 passengers and forced it to...
Next on Business Insider
Landmark human study finds a link between 'forever chemicals' in cookware and liver cancer