Travellers returned to SA in droves in March, latest stats show – even from the US New data from Statistics South Africa shows a spike in travel in and out of the country in March, as travel restrictions lightened, even while global travel remained severely constrained.

On Sunday night President Cyril Ramaphosa put considerable emphasis on the need for South Africans to reduce travel to essential trips only, in anticipation of a third wave of coronavirus infections, though he announced no new restrictions.

Over 600,000 travellers passed through the country’s borders in March 2021, compared to about 386,000 in February, data from the Department of Home Affairs’ (DHA) immigration offices at all ports of entry shows. Travelers in and out of SA increased in March.

The numbers show a deep decline in travellers in and out of the country between March 2020 and March 2021, as travel bans stopped cross-border travel except in exceptional circumstances. But in February, government’s decision to reopen 20 of its 53 land borders to neighbouring countries saw a sudden return, then a surge in numbers in March.

The vast majority of visitors to the country in February and March were from the SADC region – and over 75% of them drove here. The number of SA residents travelling increased from February to March.

International travel in and out of the country has been allowed subject to strict conditions and limited airports, since November 2020.

Overall, the data shows the drastic decline in the movement of people, both South African and foreign, in and out of the country since the start of the pandemic. 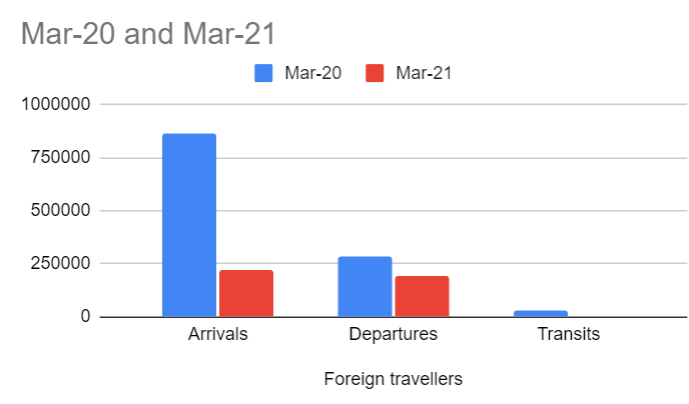 The number of foreign travellers dropped dramatically over the last year.

But from February to March 2021, the number of travellers, mostly tourists, moving through the country’s borders, spiked. The majority of tourists who came to SA in March were from Mozambique. Despite its concerns about the Covid-19 variant found in SA, the number of tourists from the USA still saw it among the top ten countries visiting SA.