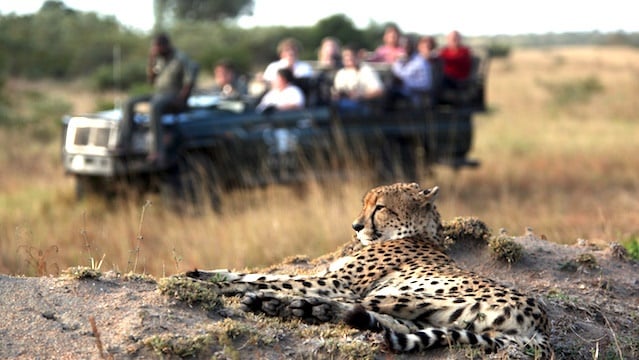 A game drive in the privately-owned Sabi Sands game reserve in Mpumalanga, in 2015. (Getty)

As of early Wednesday afternoon, game drives in South Africa may now be conducted in vehicles loaded to 100% of their capacity, and tiny airports are allowed to handle passenger flights.

The changes to lockdown rules came in a pair of Government Gazette notices from transport minister Fikile Mbalula.

Lockdown rules have been regularly adjusted, in ways big and small, since May. But the timing of Wednesday's minor changes provide a glimmer of hope for a tourism industry that says it is starved for revenue from foreign tourists, who remain banned from entering South Africa.

On Wednesday morning President Cyril Ramaphosa's office announced a long-awaited address to the nation, on Wednesday night, where he is expected to talk about a move to Alert Level 1.

One of the major questions around Level 1 is whether it will include opening up the tourism trade entirely, including allowing foreign leisure travellers.

See also | Alert Level 1 could be coming next week. Here’s what may change – and what won’t

The tourism sector has fiercely campaigned and lobbied for the opening of borders, warning that many businesses can not sustain themselves on domestic travel alone, and that time and money is running out.

"To put things into perspective, in 2019, tourism spend by Americans in South Africa was R11.8 billion, while Europeans spent R30.5 billion," said Anton Roelofse, regional general manager of Business Partners Limited, in a statement on Wednesday. "Our luxury accommodation and tourism businesses depend on this international spend to cover their high overheads, which means many will struggle to survive on a local-only clientele."

Sources told News24 that international travel would be discussed at a cabinet meeting on Wednesday, but with strict visa conditions.

Mbalula signed both decrees on Tuesday, after a meeting of the National Coronavirus Command Council on Monday but before a special Cabinet sitting on Wednesday.