What the Tour de France riders are eating for dinner TARBES, France - The riders in the Tour de France consume and burn several thousand calories daily over the 21 stages. They say they eat so much it can feel like work.

That's where Olga Belenko comes in. She's the chef for the American team EF Education First, in charge of cooking up nutritious but delicious breakfasts, dinners, and other in-between meals for the duration of the three-week race.

She recently invited us into the team's chef's van, a kitchen on wheels, to see what the riders were eating for dinner. Because the riders were racing a time trial the next day, Olga wanted to make a meal that wasn't too heavy and very easy to digest.

These are all dishes you could prepare easily at home to fuel your next workout.

A mixed green salad with lemon. "A mixed green salad is very important as it's full of iron," Olga said. The riders start the Tour eating salad with every meal, as well as generous portions of fruit and vegetables, but over the course of the race, they eat less of it and instead ask for more carbs, meat, and, in particular, avocado.

The pros are just like us! They love cheese too. On the evening we caught up with Olga, she served fresh Parmesan with the mixed green salad. "Parmesan is very old dry cheese," she said, "so the fat from it is very good, and it's salty, which the riders love." She mixed in pepper and olive oil before serving. Carlos Quevedo, Olga's assistant, drives, shops, cooks, and makes juices for the riders - and helps Olga serve all the food. The riders eat a lot of rice - at breakfast with omelets and at dinner with just about everything. They prefer white rice, Olga said, because it has more carbs per gram than brown or whole-grain, which has "too much fibre for the riders". One of the many dishes Olga served featured grilled carrots, snow peas, and broccoli spears with soy sauce, sesame oil, and sesame seeds, plus salt, pepper, and olive oil.

A mushroom soup with potato and leek. Olga said soup is popular with the riders simply because they don't always want to eat things in pieces. She can also easily add in extra carbs to fuel the riders, so they can eat more calories easier and faster. "If I gave them more veggies and potatoes, even in grilled form, maybe they'll take one or two pieces. With soup it's easier to stomach more. I even see some riders adding the rice to the soup." 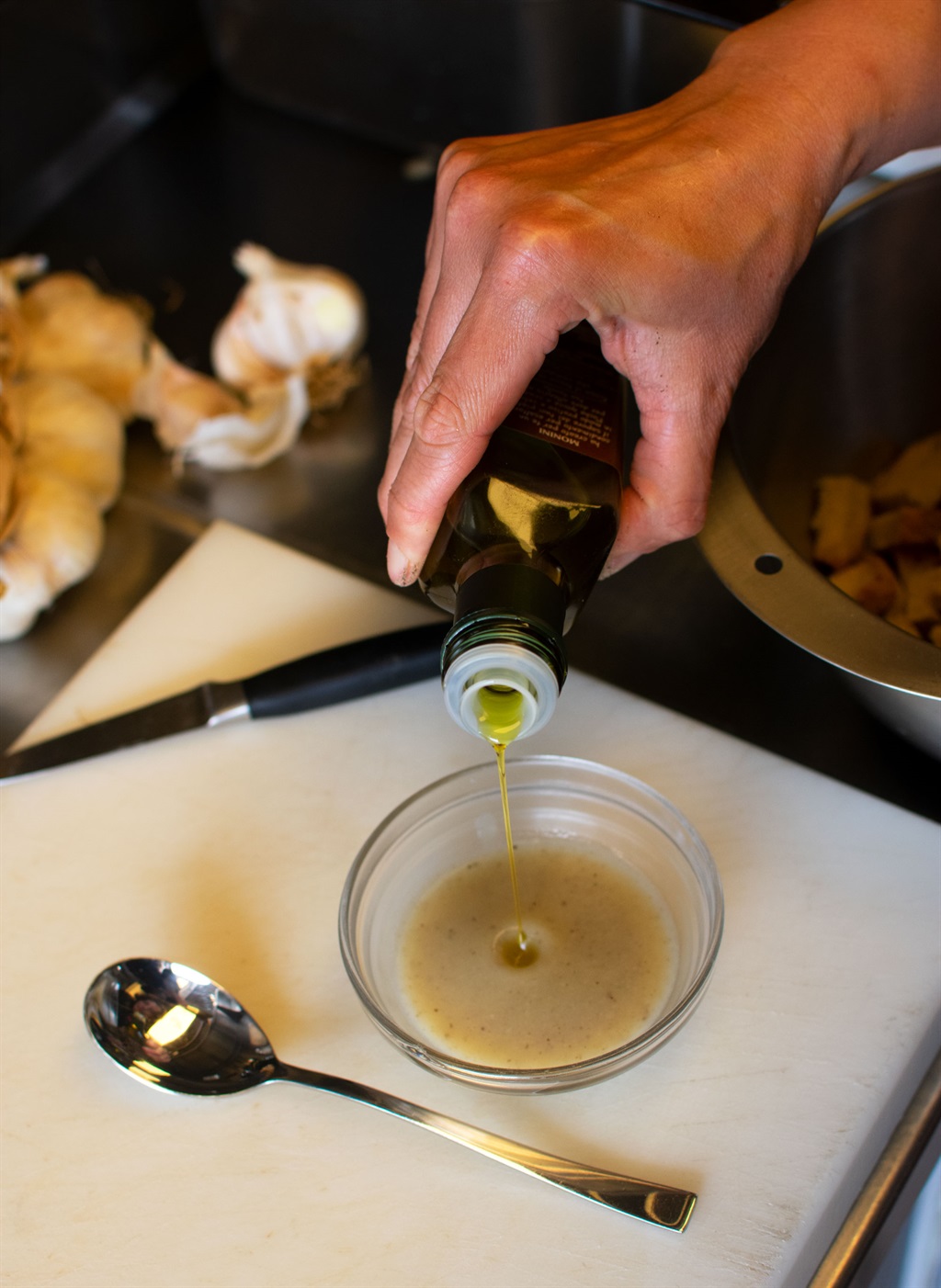 "The soup's important," Olga said. "The chicken broth is good for the riders' stomach, and it's just warm and calming food."

I got to taste it. Delicious!

Tomatoes everywhere, all the time. The highly nutritious, anti-inflammatory tomato is ubiquitous on Tour dinner tables. Olga added a balsamic reduction to these cherry tomatoes, with some agave, and baked them for 25 minutes.

Baked chicken with spices — and the skin on. The riders eat chicken twice a week and fish twice a week. Red meat is served only the night before a rest day, as it's harder for the cyclists to digest. One a day a week, they'll have rabbit or turkey. Pasta is often served as well.

Olga added garlic, curry, turmeric, and salt and pepper to the chicken, which she baked for up to 30 minutes. (She has to be careful with spices because not all riders like the same ones.) She prepares the pan with a base of onions, a taste the riders love. And she leaves the skin on.

"We don't want to avoid every fat, and so the skin is important, for the metabolism. Unlike with duck, for example, which has quite a thick skin, with chicken, after you bake it, it's almost gone, and it's really crispy and delicious."

And yes, there was dessert. Yogurt with fresh fruit.