For the first time, an hour-by-hour timeline reveals what happened after the asteroid crash that killed the dinosaurs Scientists have long accepted that an asteroid that struck Earth 66 million years ago contributed to the extinction of the dinosaurs.

But there are myriad theories as to what, precisely, happened to our planet and its prehistoric inhabitants after the moment of impact. Some explanations for the dinosaurs' disappearance blame clouds of debris and soot that blotted out the sun and cooled the planet, while others say it was noxious gases from worldwide volcanic eruptions or even a great plague.

According to a new study in the journal Proceedings of the National Academy of Sciences, global cooling was the culprit. On impact, the research shows, the Chicxulub asteroid - which was more than 6 miles wide - sparked wildfires that stretched for hundreds of miles, triggered a mile-high tsunami, and released billions of tons of sulfur into the atmosphere. That gaseous haze blocked the sun, cooling the Earth and dooming the dinosaurs.

The dinosaurs fried and then froze, Sean Gulick, lead author of the study, said in a press release. A painting of an asteroid slamming into tropical, shallow seas of the sulfur-rich Yucatan Peninsula in current-day Mexico.
Donald Davis/NASA

In order to better understand what happened on that fateful day in our planet's history, the scientists behind the new study conducted an in-depth examination of the Chicxulub impact crater - a challenging feat, given that the crater extends 12 miles into the depths of the Gulf of Mexico.

Gulick and his colleague, Joanna Morgan, collected rock samples there in 2016, from a part of the crater in which rock and debris were deposited just after the asteroid's impact. No rocks from that area had ever been extracted before.

Gulick and Morgan then spent the next three years analyzing the samples in order to geologically reconstruct a timeline of what happened after the impact. 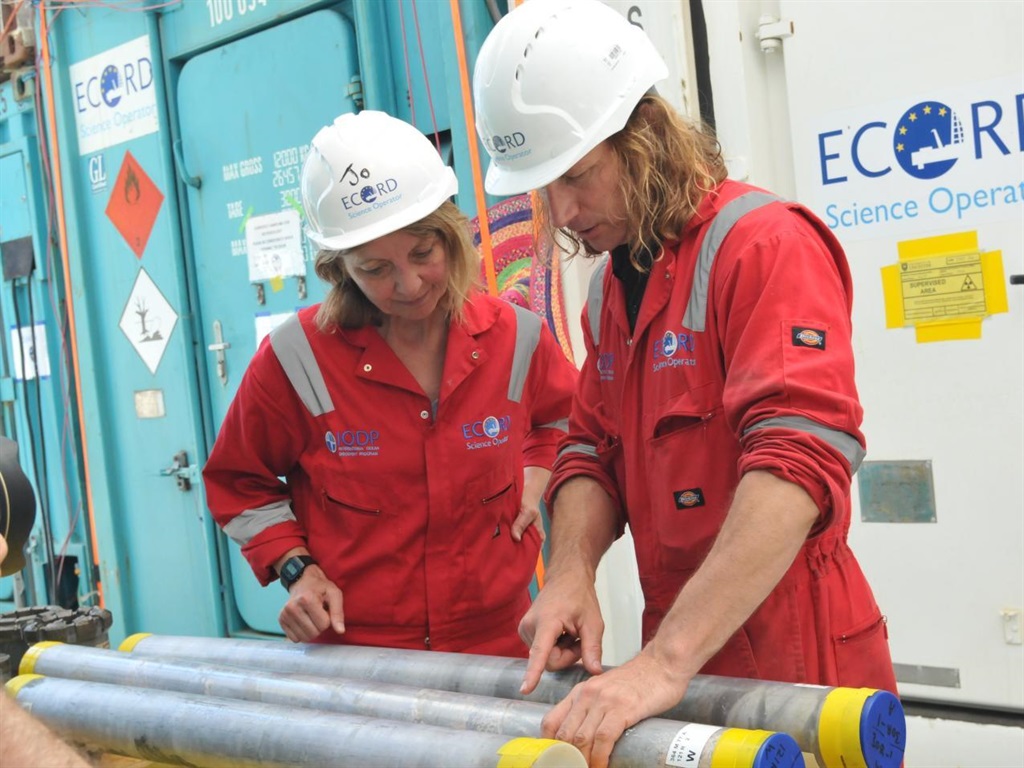 Sean Gulick and Joanna Morgan on the International Ocean Discovery Program's research expedition to retrieve cores from the submerged and buried impact crater of the asteroid that killed the dinosaurs.
The University of Texas at Austin Jackson School of Geosciences

"It's an expanded record of events that we were able to recover from within ground zero," Gulick said.

The asteroid hit with the power of 10 billion atomic bombs

Here's what their timeline showed: Within a minute of the impact, the asteroid had bored a hole nearly 100 miles wide into the seafloor, creating a bubbling pit of molten rock and super-hot gas. The contents of that fiery cauldron skyrocketed into the air, creating a mountain-high plume.

The plume then collapsed within minutes and solidified into rippling peaks of lava and rocky material. These peaks then got covered by more rocks, traces of burnt land, and charcoal transported there by ocean waves.

The presence of charcoal, the researchers said, is proof that wildfires ignited after impact; some of the fires likely started hundreds of miles away from the impact crater.

The authors estimate that the asteroid's power was equivalent to 10 billion of the atomic bombs used in World War II.

The space rock would have vaporised the surrounding land and sent ocean water careening away from the impact site at the speed of a jet plane, Gulick said. That water formed a tsunami hundreds of meters high, which might have traveled as far as current-day Illinois before receding.

Gulick told Newsweek that the space rock would have come in at a speed of more than 12 miles per second, so even dinosaurs 1,000 miles away from the point of impact probably didn't live very long before the heat reached them.

"Effectively within 1,500 kilometers, you would have seen very little before being incinerated," he said.

The impact released billions of tons of sulfur into the atmosphere

Dinosaurs weren't the only creatures that went extinct after Chicxulub hit. Flying pterosaurs and marine predators like mosasaurs and plesiosaurs also disappeared, along with 75% of other life on the planet.

Many creatures died near ground zero, of course, but the mass extinction associated with the asteroid was likely a consequence of what happened in the atmosphere after impact.

According to Gulick's team, the impact vaporised sulfur-rich rocks, releasing a haze of gaseous sulfur into the air that blotted out the sun and cooled the planet.

The scientists came to this conclusion because the samples they unearthed contained lots of sandstone, limestone, and granite, but lacked sulfur-rich rocks, even though rocks near the impact site should be replete with sulfur. So they estimated at least 357 billion tons (325 billion metric tons) 0f sulfur gas entered the atmosphere.

By comparison, the 1883 eruption of the Krakatoa volcano spewed four times less sulfur into the atmosphere than the dinosaur-dooming asteroid did. And that volcanic eruption cooled the Earth 2.2 degrees Fahrenheit for five years.

After Chicxulub hit our planet, he told Newsweek, "temperatures globally would start to plummet as a sulfate aerosol haze surrounds the planet. The Earth would likely no longer look like the familiar blue marble from space and it would take perhaps as long as two decades to clear again fully."