US President Donald Trump referred to Tim Cook as "Tim Apple" during a meeting this week , and the name seems to have caught on.

At least on Twitter, that is: The Apple CEO has replaced his last name with the Apple logo on his profile. It's unclear precisely when the change occurred, but the Wayback Machine showed that Cook was using his full name on Twitter on Wednesday, indicating the update most likely happened on Thursday. 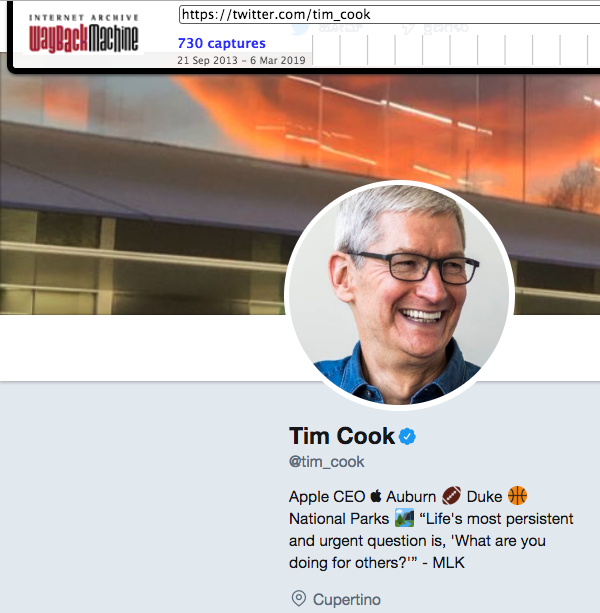 As Trump was praising Cook for investing in the US, he said, "We appreciate it very much, Tim Apple."

It's possible Trump was referring to the CEO and the company separately in the same sentence, as the White House transcript of the conversation includes an em dash between "Tim" and "Apple."

Regardless, the reference caused quite a stir on the internet on Wednesday:

Some other industry giants besides #TimApple for @realDonaldTrump pic.twitter.com/RtLHBnmQwp

Providing further evidence that Apple is having a sense of humoúr about the situation, Lisa P. Jackson, Apple's vice president of environment, policy, and social initiatives, retweeted this on Thursday: During the meeting, Cook spoke about the importance of teaching students skills like coding to prepare them for the workforce. He said nearly half of Apple's hires last year did not have a four-year degree.

It wouldn't be the first time Trump has mixed up the name of a CEO. Last year, he referred to Lockheed Martin CEO Marillyn Hewson as "Marillyn Lockheed."