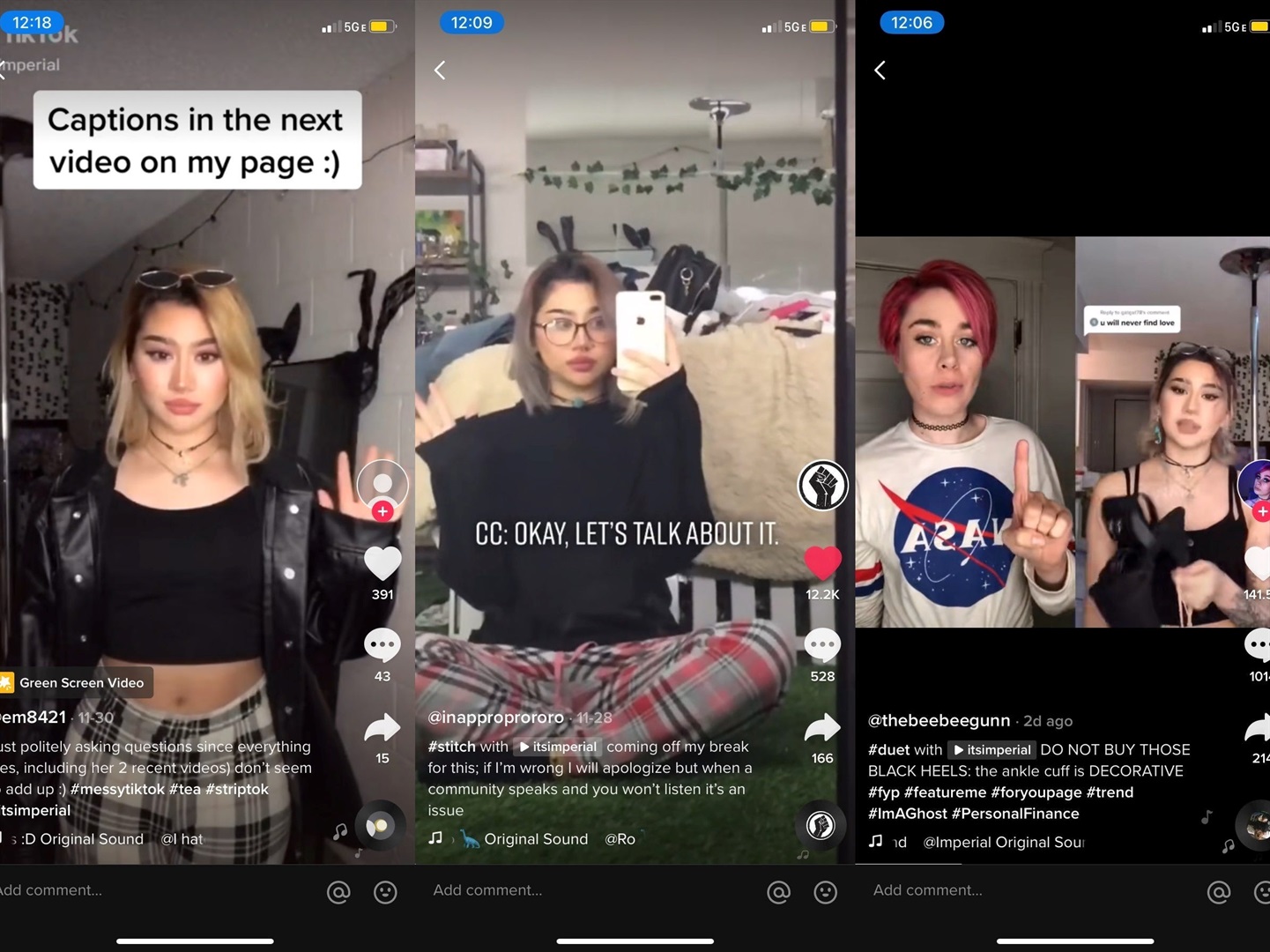 ItsImperial started making videos about stripping in April 2020. These are screenshots of other sex workers' response videos.
TikTok

Arguably the most popular stripper on TikTok has amassed 1.9 million followers sharing wild stories about her life as an 18-year-old in the industry - but cracks appear to be emerging in her narrative.

In her stories, ItsImperial recounts running into her dad at a party she was dancing at, wives throwing $450 perfume bottles at her on stage, and even a time a client launched human feces at her during a lap dance.

She has nearly 10 times more followers than most strippers on the platform, and her accounts have been featured in the Daily Mail.

But three weeks ago her empire faced a challenge as veteran TikTok strippers, unconvinced by her stories, started to question details about her videos.

"Has any one performer had all of these horrible things and then some happen to them within their first year of stripping? I hope the f--- not."

Prominent members of StripTok, the nickname for TikTok's community of strippers, told Insider they tried to approach Imperial about the implications of her videos to no avail. That's when they started making their own videos calling out what they saw as inconsistencies in her accounts (like her stripper terminology and timeline), stories they didn't believe, and voicing concern for Imperial's wellbeing.

"The fact that people want to defend her stories because they find them entertaining is really upsetting," Babyskripper, a stripper on TikTok with 22,000 followers, said in a video. "Consuming violent abuse against sex workers as entertainment is why our job is dangerous. Though she's making up these stories, she's contributing to the problem. If not, she's in danger and she needs help."

Imperial did not immediately respond to Insider for comment and has now set all of her videos, viewed by Insider, to private on the social media platform.

Critics say they are concerned about Imperial's young age

Viewed individually, Imperial's videos seem like rare, wild occurrences that happen two or three times a year, at most, for strippers. But when watched in succession, StrippaYoga and other veteran strippers on the platform told Insider they become unbelievable.

Above all, her critics point to Imperial's age: She said she turned 18 in April and graduated high school in May, meaning she has only been of legal age to work in a strip club or private party company - and experience these horrifying events - for seven months.

On November 28, after other dancers started posting call-out videos, Imperial posted two videos tackling the overarching question about her age.

Strippers say Imperial's stories are hard to believe, and include dangerous advice about heels

TikTok strippers said there were aspects of her stories that didn't match up with their experience in the industry. Critics started to note that Imperial's high heels she said she'd used for over a year were scuff-free, and the pole in her room was incorrectly installed.

BeeBee Gun, a Minnesota-based stripper of three years with 736,600 followers on TikTok, told Insider they came across Imperial's page when she first joined the platform in May. They quickly unfollowed after finding Imperial's stories hard to believe, given her knowledge of the industry.

Imperial says she only dances on stages at private events and parties.

"It really stuck out to me when she was talking about doing private parties and stage dances because there's no stage at private parties. Either they're usually held in hotel rooms or offices or somebody's house," BeeBee Gun told Insider.

BeeBee Gun questioned that a client's wife would be able to come back to the same venue the next day to break her nose, throw a perfume bottle, or attack her because private events are rarely held at the same place two days in a row. There is also, typically, tight security checking for weapons and restraining fights.

"If you come in angry like that, they're not going to let you in," Jaid Sandeen, a stripper with 787 followers on TikTok, told Insider. "You're not getting past the bouncers that are six-foot, 250 pounds."

Another video has been called out for giving advice for dancing heels that critics say could break a dancer's ankle if taken seriously.

In the video, she recommends a black heel for stripping with an ankle cuff for "support." According to several dancers who responded, the ankle cuff is only decorative. It will not provide support for a "baby stripper" learning how to walk in high dancer heels. If they fall, the cuff will not help, and it's dangerous to think that it will: the cuff is not made of hard material, nor does it fasten tightly.

Jaid told Insider Imperial's page was filled with other red flags like Imperial's casual tone when talking about traumatic experiences on stage.

"When something happens in the clubs like that, you're definitely not going to tell that story again, because you're out of work for a week or two panicking and freaking out to where you can't get back on stage," Jaid told Insider. "Girls who've got some trauma, you see that trauma in their stories."

Sex workers say her stories are harmful to their community

Whether or not Imperial's stories are true, members of StripTok say the latest videos attempting to explain how she started stripping at 17 tell an even more dangerous narrative that further stigmatizes sex workers.

"What you're doing now is skewing the line between sex work and sex trafficking, therefore bringing greater harm to my community and to actual victims of sex trafficking and children at that matter," Inapproproro, a stripper on TikTok with 500,000 followers, said in a video. "It is inappropriate and unacceptable and it needs to stop."

"You have a platform of 1.9 million people and you're using it to tell incredibly stigmatizing stories," Inapproproro said. "It's incredibly performative and you're bringing great harm to the people that you're trying to imitate."

BeeBee Gun told Insider that the minors who follow Imperial and may have had their first exposure to stories about stripping may develop negative, harmful views about sex workers that further ostracize them from society.

"They become the people in society who are going to judge and stigmatize us and her creating these stories is going to directly affect the rest of the community, whether or not she thinks so or anybody else does."

America's highest-paid legal sex worker is suing Nevada for the lack of work during the pandemic, urging the state to reopen brothels

A sex worker said 'vanilla-type people' should reconsider joining OnlyFans: 'Once your naked body is on the Internet, good luck getting it off'